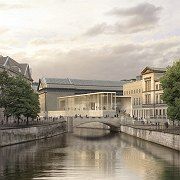 British architect David Chipperfield's design for the James Simon Gallery at the Museum Island in Berlin.

It's almost 18 years since the Berlin Wall came down, but the German capital is still a work in progress -- a fact which is nowhere more apparent than on the city's Museum Island, a complex of world renowned museums that are slowly being restored to their former glory.

The renovations are to be completed with a brand new entrance building. British architect David Chipperfield had been commissioned to create a unifying design for the island, but when he came up with his initial vision in 2001 there was an outcry over the way his audacious design of glass and steel clashed with the existing old buildings. He went back to the drawing board and came up with a gentler design that has been better received in Berlin. Chipperfield unveiled his reworked plans on Wednesday to journalists and this time, there was almost universal approval.

The new building will act as a reception center, linking the five major museums on the UNESCO world heritage site, and finally forming a single entry point for the millions of visitors who visit Berlin's cultural jewel each year.

The gallery will be attached to the Pergamon museum, one of Berlin's biggest tourist attractions, which houses a Greek temple as well as parts of the original walls of Babylon. There is also the Alte Nationalgalerie, the Neues Museum, the Bode Museum, and the Altes Museum, which houses an outstanding collection of Greek and Egypt art including the 3,400-year-old bust of the Egyptian queen Nefertiti.

The new James Simon Gallery is named after a Jewish businessman who had been a well-known patron of the arts in Berlin in the late 19th and early 20th centuries, and who contributed to the collections currently housed in the island's museums.

Chipperfield has been working on the new design since the German parliament approved €73 million ($99 million) funding for the project in November 2006.

He said the plans can be read as both a building in itself, "but also as a composite of the existing buildings." There had been some concern that his initial plans would endanger the Museum Island's status as a World Heritage Site.

Berlin's cultural officials breathed a sigh of relief when they saw the new reworked plans. "We are very, very happy with this design," said Peter-Klaus Schuster, director of the Berlin state museum authority.

Schuster was full of praise for the plans to build a colonnade on the upper level of the building, echoing that built in the mid-19th century by Friedrich August Stüler. "We knew what we build here has to have the dignity of a temple," he said, adding that he was sure Chipperfield's design had achieved exactly that.

The president of the Prussian Cultural Heritage Foundation, Klaus-Dieter Lehmann, argued that the building was in keeping with the history of the island, which had constantly renewed itself over the years. "Every architect has left traces of his own era here -- from Wilhelminism to the robust buildings of the 1930s," he said.

The Museum Island is situated in the former East Berlin, and after the Berlin Wall fell it still bore the scars of bombing and intense gun battles from the end of World War II. Since reunification, the government has spent hundreds of millions of euros restoring the museums. The latest to reopen was the Bode Museum, in October 2006, which is devoted mostly to sculpture. The Berlin authorities are hoping that when the gallery is completed in 2012, the island will become the world's biggest museum complex, rivalling the Louvre in Paris.

The Chipperfield design is not the only big renovation project on the island. On the other side of the grand boulevard Unter den Linden, the former Hohenzollern Berlin palace is to be rebuilt.

The palace, known as the Stadtschloss, had been knocked down after World War II to make way for the East German parliament building. The plans to reconstruct the original palace prompted a veritable culture war in Berlin between those looking for a more innovative building to house contemporary art and those determined to revive Germany's lost imperial grandeur.