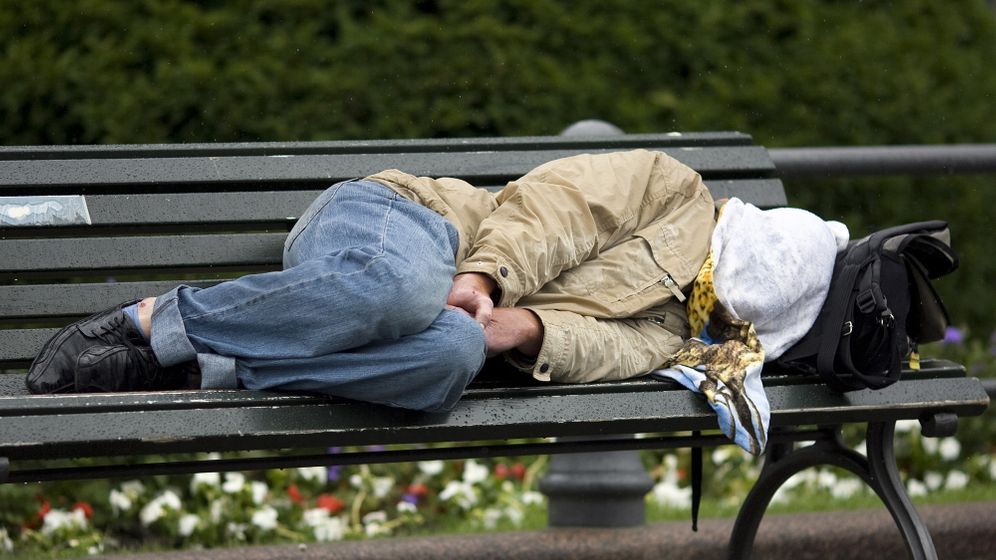 Photo Gallery: An Unlikely Tour of the German Capital

Berlin's Zoologische Garten Station, better known here as Bahnhof Zoo, has long been a haunt of junkies and the homeless. Locals are used to the sight of them slumped amid the garbage strewn around the patch of grass outside the station. Visitors to the German capital tend to keep their distance, making sure they steer clear of skid row and stay on the right side of the tracks.

"Everyone knows Zoo Station from Christiane F.'s book 'We Children from Bahnhof Zoo,'" explains Carsten Voss, who used to be homeless himself. Although the seminal book -- which portrays a heroin-addicted teen girl in West Berlin -- was written in the 1970s, "nothing has changed since then," he says. "There's still drugs, prostitution and crime, even though it all looks a bit more upmarket."

The area has certainly been cleaned up in recent years with a spate of new developments, including the luxury hotel Waldorf Astoria, which opened in January.

These days, Voss works in a drop-in center for the homeless and gives tours to people who'd like to discover Berlin's underbelly. Although he gets paid an expense allowance, he lives from welfare.

He developed his tour in collaboration with the association querstadtein. Its goal is to bring people who live on the margins of society into contact with the mainstream public by offering homeless people an opportunity to give guided tours of their neighborhoods -- the parks and streets where they meet their friends, and the organizations and outreach centers that provide them with support.

"Most people who live on the streets gravitate to places that give things away for free," says Voss. "Twenty-four-hour supermarkets where you can return bottles, late-night stores, soup kitchens, spots where you can sit down for a bit." For his part, Voss sounds more like a social worker than someone who has experienced homelessness firsthand. In fact, he doesn't correspond to most people's image of a down-and-out person in more ways than one.

Before suffering burn-out and depression, Voss had a managerial position at the Bread & Butter fashion trade fair in Berlin. But then he lost his job. Today he still wears a white shirt and Ray Bans and sports slicked-back salt and pepper hair. "I went around like this even when I was homeless," he says, laughing.

The only details marring his well-heeled image is a small stain on his shirt -- after all, it came from a clothes bank -- and a missing tooth. Voss has survived some tough times. "Life is very stressful when you're homeless," he says. "You have to do what it takes to get through the day, and you can forget the idea of privacy." The only time he was ever alone, he recalls, was when he got to take a shower at a drop-in center.

Now his mission is to teach people about the experience of being homeless. Experts believe that up to 4,000 people live on the streets of Berlin. Some 10,000 are homeless, but seek shelter in care centers.

And not all of them cluster in rough neighborhoods. Voss' tour leads through some suprisingly elegant parts of the city, such as the leafy Victoria-Louise-Platz square in the Schöneberg district. "I used to sit here and read when I had my own apartment," he remembers. "Later, I'd sit over on the other side with all the other homeless people. There's a very clear dividing line."

What might also be surprising to some is that the area's wealthy elderly residents -- who are equally familiar sights on the square -- often donate to homeless shelters in winter. "They care", says Voss. It's such small asides that make his tour so intriguing.

'It's Not All Pretty'

"We weren't interested in the idea of a slum tour," says Katharina Kühn, who co-founded querstadtein. "We didn't want people looking at homeless people as though they were in a zoo." She first came up with the idea for the project after seeing a similar initiative in Copenhagen and promptly recruited 15 volunteers from within her extended social circle. A similar program also exists in London.

Despite her inexperience, Kühn got in touch with homeless shelters and places frequented by hundreds of homeless people a day, even if they don't feature on Voss' tour.

The people who sign up for it -- paying around €9 (about $12) for the privilege -- seem happy to pound the pavements. "When you walk around Berlin with your eyes open, you realize that it's not all pretty," says one young man with a trendy haircut, shades and sneakers.

The tours have now been running for a month and, according to Kühn, they usually include a journalist. What they don't tend to mention in their coverage is that Carsten Voss is still the only guide, and he actually has a roof over his head these days. Around 20 homeless people took part in a workshop organized by querstadtein, but none of them have actually volunteered to lead a tour.

"They need a bit more time," explains Katharina Geue, the organization's volunteer press spokesperson. "Not everyone is comfortable speaking in front of groups," adds Voss.

His tour also includes a visit to the landmark Kaiser Wilhelm Memorial Church, a structure largely destroyed in the war that has been preserved in its damaged state. "It's important to remember that homeless people like beautiful places too," he points out. He also tells his group what they can do to help homeless people. "Don't ever throw out returnable bottles, but put them next to trash cans. Don't put old clothes in second-hand clothing containers but donate them to charities. And make eye contact with them, talk to them!" he advises. "To me, the worst thing was being invisible."

He has a point. But now that normality has returned to Voss' life, the participants still can't say they've talked to an actual homeless person --they have yet to make the transition from the less respectable side of the park, as it were.

8 Bilder Photo Gallery: An Unlikely Tour of the German Capital 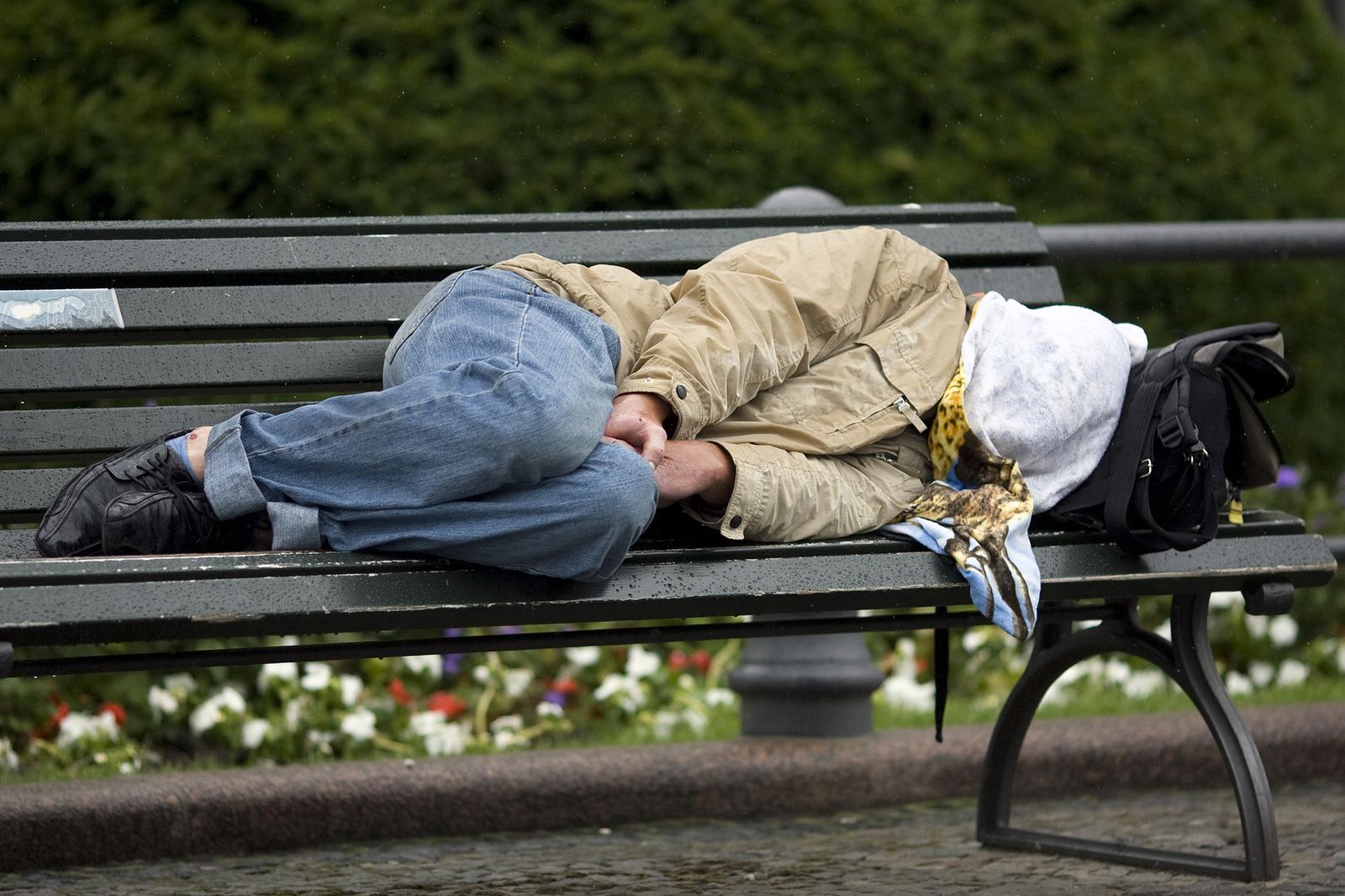 Experts believe that up to 4,000 people live on the streets of Berlin. Some 10,000 are homeless, but seek shelter in care centers.