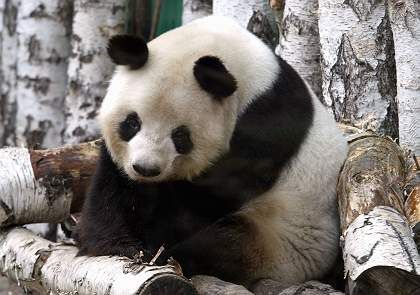 Bye Bye Yan Yan: the Panda lady knew how to pose, as this 2004 portrait of her shows.

Berlin Zoo is in mourning following the surprise death of 22-year-old lady Panda Yan Yan, whose name means "The Cute One." She was found on Monday afternoon after alarmed visitors reported her lying motionless in her outdoor enclosure where she liked to roll around in the sand and lazily munch on bamboo shoots.

A post mortem showed that she died of heart failure caused by acute constipation, zoo vet Andreas Ochs told the Associated Press. There had been no signs that Yan Yan had been in any pain so it had been impossible to detect that she was constipated, he added.

Pandas can live more than 30 years. Berlin zoo's other Panda, Bao Bao, is 29 and going strong. Yan Yan is being kept in a refrigerated room while officials decide what to do with her. Technically she still belongs to China, which loaned her to the zoo in 1995.

The zoo could not immediately be reached for comment on media speculation that Yan Yan had been stressed by the overwhelming number of visitors to Berlin Zoo since unfeasibly cute polar bear cub Knut went on show to the public last Friday.

Some 30,000 people crowded the zoo at the weekend, several times more than usual, and many who couldn't get a glimpse of Knut went over to check out Yan Yan.

Following the worldwide success of Knut, whose first public appearance was witnessed by about 300 journalists from around the world and broadcast live on CNN, the death of Yan Yan marks something of an emotional rollercoaster for the zoo.

"On the one hand Knut, who enthralls everyone. And now the death of Yan Yan. It's terrible -- joy and sorrow are so close together," the zoo's bear expert Heiner Klös told Bild newspaper.

When Yan Yan arrived at the zoo in 1995, after a flight from Beijing on which she was accompanied by Berlin's then-mayor Eberhard Diepgen, she had received almost as much attention as Knut, one zoo official recalled.

The zoo had hoped she would produce offspring but she never did. Yan Yan didn't get on well with Bao Bao, and repeated attempts at artificial insemination failed.

The zoo abandoned its Panda cub project two years ago but zookeepers and visitors had long since grown fond of Yan Yan, who liked to pad slowly around her enclosure and often ate bamboo while lying on her back.

Was Yan Yan heartbroken at all the attention that darned polar bear cub has been getting next door? Knut's fame continues to grow. The zoo has run out of stuffed Knut bears after selling all 2,400 of them and now plans to order up to 10,000 more from China. Whether even that will be enough is to be doubted.

A song dedicated to him, "Knut ist gut," goes on release on March 28 and is already being played on radio stations.

Meanwhile Knut's loyal handler Thomas Dörflein, 43, continues to provide the white ball of fluff with around-the-clock care, cooing Elvis Presley songs at him as he feeds him porridge of milk and fish in the dead of night when the other animals are asleep, apart from the wild cats and owls, presumably.

Knut is putting on 200 grams a day and should be able to spend the nights on his own in one or two months, according to the zoo's vet Andre Schüle.

And in six or seven months, the inseparable couple may have to part because by then Knut will be so big and strong that he may be too dangerous to be in close contact with. "Knut will make it clear to me when he no longer needs my help," Dörflein told Bild. That will be another tragic day at Berlin Zoo.