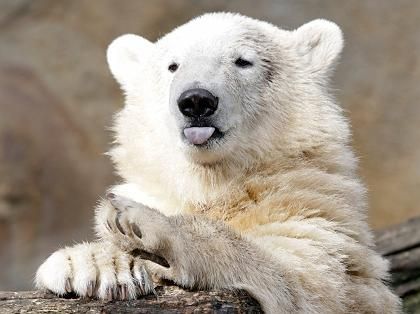 Knut sticking out his tongue at visitors last week.

Knut the celebrity polar bear has been receiving get-well messages from around the world ever since he slipped on a wet rock and hurt his paw last Friday -- but his keeper at Berlin Zoo thinks he's only pretending to be in pain because he likes the attention.

The shaggy nine-month-old cub, now weighing in at 80 kilograms, made a pitiful sight on Monday, limping around his enclosure in the drizzle and dragging his right back paw. Visitors felt sorry for the bear, who was rejected by his mother at birth.

But keeper Thomas Dörflein, who reared Knut around the clock for months after he was born, was having none of it. "He's a little play-actor -- just like all young bears who were hand-reared," he told tabloid daily Bild. "He just wants attention and he quickly noticed that he could get it with his limping act."

Dörflein said he had spotted Knut trotting around quite normally the previous morning when he thought he wasn't being watched. Zoo vets have x-rayed Knut's paw and found no broken bones. They prescribed a painkiller to be mixed in with his meals in case he had just sprained it.

Since then hundreds of Knut fans have been sending in emails to express their concern. "I hope you'll feel better soon. I love you," wrote Luisa from Brazil in an email sent to a blog run by local TV station RBB.

While Dörflein, who is about to receive a medal from the city of Berlin for his tireless work bringing up Knut, is adamant that the bear is duping the general public, zoo curator Ragnar Kühne is not so sure.

"I think that would be exaggerating his intelligence," Kühne told SPIEGEL ONLINE Tuesday. "But he's clearly missing the company of his mother, or rather Thomas Dörflein. Hand-rearing isn't a desirable form of bringing up animals but we've been trying to do it as well as possible."

Dörflein and Knut enthralled hundreds of thousands of visitors with their twice-daily appearances together for almost four months after Knut was first presented to the public and the world's media on March 23. He owed his fame to a combination of his extreme cuteness and media reports that wildlife experts said he should be killed rather than unnaturally reared by hand.

During his public sessions, visitors would watch adoringly as Knut followed Dörflein around, played with him and sucked on his fingers.

But as he grew larger and his playing got rougher and more dangerous, the zoo decided to stop the daily show in July and give Knut his own enclosure.

"It was never intended to be a circus act," said Kühne. "Dörflein still has direct contact with Knut behind the scenes. But we wanted to wean him off Dörflein so that he won't feel too lonely when he does get too dangerous to approach."

While visitor numbers have tailed off from the extreme highs they reached in March and April, when thousands lined up patiently to catch a glimpse of the superstar for a few minutes, Knut remains a major draw.