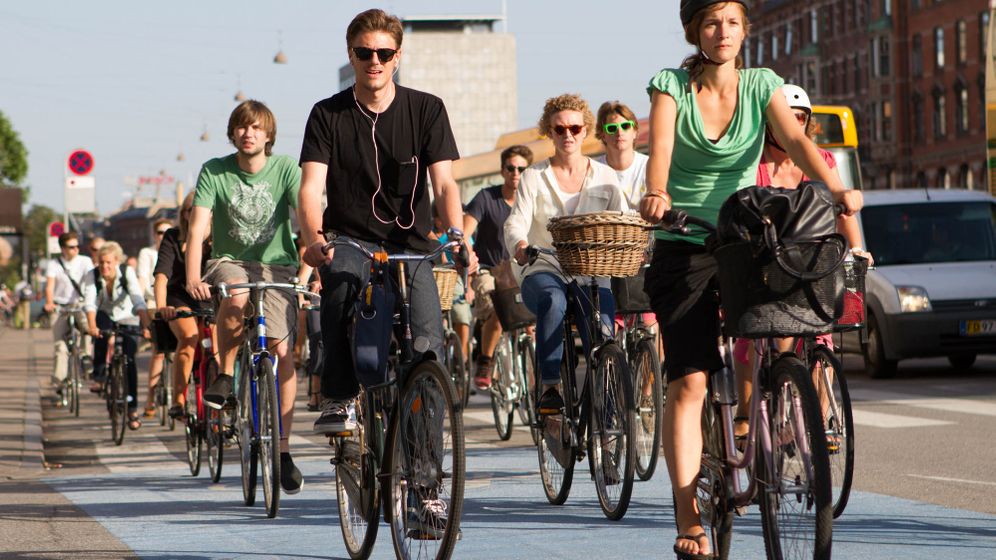 Photo Gallery: Too Many Cyclists on the Road?

The bike path is completely full -- in pairs or three abreast the cyclists roll past the stoplight at a snail's pace. They pass by biker-to-biker for a good 80 seconds before the gaps between them finally start to widen. The scene at a Copenhagen intersection is captured in a YouTube video, which shows what can happen when a third of a city's population travels every day by bike.

Urban planners in Denmark and Holland are well acquainted with problems like these. Cycling has been heavily promoted, and more and more people are taking to the pedal -- but eventually cycling paths, bike racks and other parking areas have begun to run out of space. The bike boom -- long seen as the universal solution to roads jammed with parked cars, dead inner cities and other urban maladies like noise, smog and lack of exercise -- threatens to choke on its own success.

Take the example of Groningen, a city in the northern Netherlands. Out of a population of just under 200,000, there are 375,000 bicycles, and 50 percent of all trips are made by bike. "We are very proud of our high share of bicycles, but the success has also caused problems," Jaap Valkema, the city's bicycle commissioner, recently said in a panel discussion at the Velo-City urban cycling conference in Vienna. One must keep in mind, cautioned Valkema, that public opinion can always flip. "We have to take action," he said.

Urban planners in Groningen flipped the switch some 35 years ago. That's when they cut off all automotive traffic through the city center. Cycling became the most flexible and popular means of transport. But even if a bike takes up less space than a car, it became difficult to find space to cycle in Groningen's center.

To get the chaotic bike parking situation under control, the city has laid out red carpets where bike parking is not permitted. Parking areas are then demarcated in turn. Ten years ago, there were 3,000 bicycles parked in front of the main train station," said Valkema. Today there are 10,000, he added, primarily because of the rising number of students in Groningen. Soon that number could be as high as 15,000 or 17,000. A parking garage has been built at the station to accommodate this flood of bikes. "It may be that we have to start charging for parking," said Valkema, "at least for more than a day."

The city wants to increase the share of cycling traffic -- the so-called Modal Split -- to 65 percent by 2030. To achieve this, the city has planned a new parking garage with spaces for 1,200 bikes. In addition, traffic planners want to route car and bike transportation more consistently. Instead of broadening bike paths, they will soon reclassify entire streets as cycling roads.

Copenhagen is grappling with similar problems. The most heavily frequented bike paths headed to the city center are, at the most, 3-4 meters (10-13 feet) wide. As long as the light is green, a steady stream of cyclists flows by at around 20 kilometers per hour (12 mph). But at some point the light turns red -- and then patience is called for. "Sometimes the bike path is so full that I need two, three traffic light phases before I'm able to cross the intersection," says Niels Torslov, the Danish capital's chief traffic planner.

This year alone, the city has invested €22 million ($30 million) to adapt and expand the current infrastructure. "We are focussing on the areas of the cycling network where there are often traffic jams and that are unsafe," says Ayfer Baykal, Copenhagen's deputy mayor for environmental issues and technology. She considers those millions a good investment. "Of course cycling infrastructure costs money, but it is a very effective and affordable way to improve mobility in Copenhagen," she adds.

The bicycle boom is causing problems in the German capital, as well. "There is a lack of space on the roads," says Burkhard Horn, a Berlin traffic planner. "The bike paths are too narrow. Sometimes 30, 40 people will be waiting at a traffic light." There have also been conflicts between fast and slow cyclists, because many bike paths -- especially older ones -- don't offer space for overtaking other bikers.

Anger on the Sidewalk

Horn also worries about increasing conflicts with pedestrians. These also go back to poor planning. Years ago, bike paths were often built into sidewalks -- inevitably bringing pedestrians and cyclists into uncomfortably close vicinity. And on some streets without bike paths, some cyclists prefer riding on the sidewalk rather than the street, because they feel safer there or because the pavement is smoother to ride on. In the bicycle metropolis of Copenhagen, cycling on the sidewalk is, incidentally, absolutely taboo.

In Berlin, the problem is slowly being resolved: The city is adding cycle lanes to existing road surfaces. But because money is scarce, there won't be a physical separation, such as a curb, as is customary in Denmark and Holland. The price for this is that cars continue to misuse bike lines as parking spaces.

But where this journey is headed is well known to Horn, the traffic planner: "We need to reallocate space for bicycles. That is inevitable. The space will be taken from cars."