Sailors have often been astounded by how an albatross could follow their ships for hours, with a minimum of an effort, hardly flapping a wing. They glide effortlessly on wind thermals, using their more than two-meter (6.5 foot) wing span. "It is absolutely phenomenal to observe them," enthuses biologist Philip Trathan.

And he should know. Trathan is a scientist at the British Antarctic Survey at Cambridge and he investigates the behavior of southern polar marine birds such as penguins, petrels and albatrosses. The black-browed albatrosses are mainly found in the cooler latitudes of the Southern Hemisphere -- but they occasionally cross the equator, spending the summer even in northern climes. No one knows why. 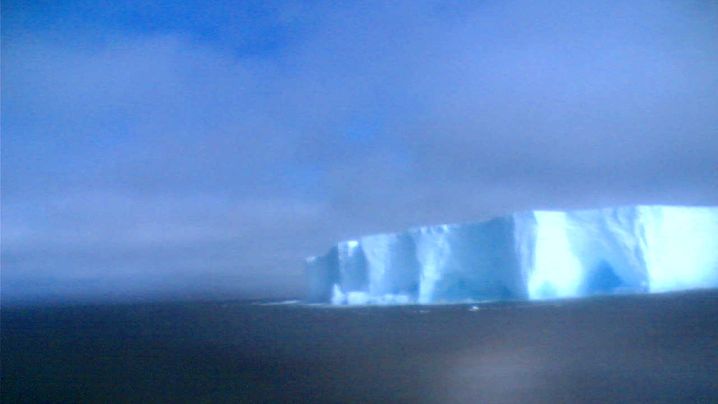 Albatrosses pose a number of puzzling questions for researchers. Not least, how do they locate their prey in the vastness of the ocean? Even when the seas are rough, they can locate fish swimming meters below the surface. It is also thought they can locate dense schools of fish. Unlike its close relatives, the black-browed Albatross eats not only fish, squid and krill, but also a few centimeter-long crustaceans that live in the open sea.

To get to the bottom of how the black-browed Albatross manages to survive, Philip Trathan and three Japanese colleagues devised a way to monitor their hunting antics. He attached small cameras to four of the birds. The devices, which weigh only 82 grams (2.89 ounces) apiece and are about the size of a lipstick, take a picture every 30 seconds. They are also kitted out with a tiny thermometer and a depth gauge. The measuring device monitors temperature fluctuations and, if the albatross dips into the water, measures the depth of his dive.

People are Not a Threat

In January, right in the middle of the Antarctic summer, investigators visited a colony of black-browed Albatross on Bird Island off the coast of South Georgia where the birds raise their young. "They are very tame and remain seated on their nests," Philip Trathan tells SPIEGEL ONLINE. The colonies have virtually no experience with people, so they do not see two-legged visitors as a threat. That fact made the scientists' task easier.

Four albatrosses were recruited as research assistants and each one had a mini-camera mounted on its back. The birds hardly resisted. But the biologists still worked with caution because of their sharp beaks. "Those are mean weapons which one doesn't want to have near their face," says Trathan.

During the breeding and rearing seasons the parents usually take turns guarding the young and hunting for food. In the beginning, the birds fly for up to five days, sometimes traveling as far as the Patagonian shelf off the coast of Argentina. "That's a flight of about 1,000 kilometers (621 miles)," says Philip Trathan. Once the chicks hatch they no longer have the time for such distant trips. Instead they travel within a radius of a few hundred kilometers to find food to sate their hungry offspring.

Although one of the four cameras was lost during the long flights, the measuring devices recorded a wide range of data. Of a total of 28,725 images, some delivered the evidence researchers had been looking for. For example, one picture clearly shows the back of a killer whale with at least four albatrosses following behind. Shortly before and after the picture was taken, the depth gauge recorded that the birds had taken several dives. Apparently there was something of interest in the water.

From this evidence, Trathan and his colleagues believe that the birds track the orcas in order to profit from the remains of their hunting. By feasting on the whale's food scraps, the birds could save energy, the researchers suggested in a peer-reviewed article in the Internet magazine PLoS One published on Wednesday. It is also possible that the birds prey on the fish which the killer whales have driven towards the surface. In other pictures the scientists noted that the birds flew together, indicating that they, at least sometimes, tend to hunt in packs.

However, albatrosses certainly aren't just scavengers. "They have a very well developed olfactory system," said Philip Trathan. With this organ, the olfactory bulb, the animals seem to be able to smell their fishy prey. Years ago, the biologist observed from a boat that he could attract the black-browed Albatrosses and petrels simply by pouring herring scent into the waves. Trathan's American colleague Gabrielle Nevitt brought further details to light in a recent study. She found that albatrosses seemed to be deliberately following wind borne scents for kilometers in a bid to track down food.

"But we are still far from knowing how the birds manage to smell fish swimming underwater," says Trathan.