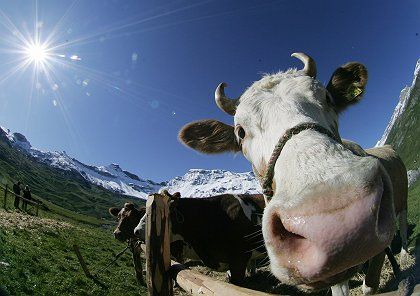 Cows are burping too much methane for the world's good.

While people are being asked to reduce the amounts of flights they take and make their homes more energy efficient, what they put on their plates could be having as big an impact on climate change. Gas-guzzling SUVs and badly insulated buildings are partly to blame for the earth's greenhouse gas emissions, but it seems the humble grass-munching cow is also a major culprit.

Agriculture is responsible for producing 37 percent of global methane emissions, a gas that is 23 times more potent than CO2 when it comes to global warming. And much of this gas comes from the burps of ruminating animals such as cows and sheep. If a cow's manners could be improved a bit, then the world might just stop warming quite so fast. And it could be as simple as getting them to graze on different types of plants. Scientists at the University of Aberystwyth are now working on using plant-breeding methods to develop new diets for livestock.

Normally a cow's stomach is pretty inefficient -- 80 percent of food ingested comes out as waste or methane. The average cow produces between 300 and 500 liters of methane a day, most of it through belching. "There is a common misperception about how methane gets into the atmosphere," Michael Abberton, a scientist at the Aberystwsth's Institute of Grassland and Environmental Research, said Monday. "It is actually through belching rather than the other end."

Abberton told a briefing on farming and climate change at London's Science Media Center that the key could be developing new varieties of legumes and grass, as well as planting more clover and birdsfoot trefoil, a common wildflower. These could change the way the bacteria in the cow's gut breaks down food. According to the scientist, developing new varieties of plants which are easier to digest could allow farmers to avoid reducing stock while still cutting methane emissions.

Across the world, people have increasingly turned to meat-rich diets -- in fact methane concentrations have increased by around 100 percent since 1900. According to the United Nations Food and Agriculture Organization (FAO), global meat production is projected to more than double from 229 million tons in 1999/2001 to 465 million tons by 2050, while milk output is set to climb from 580 to 1,043 million tons. And agricultural livestock is already hogging 30 percent of the earths entire land surface if you count the crops necessary to feed them, according to a 2006 United Nations report.

The search for ways of reducing methane production in agriculture is, therefore, an important part of tackling climate change. In fact it has become a whole research field of its own.

For example, researchers at the Rowett Research Institute in Aberdeen are looking at the effects of feed additives on methane reduction. Dr. John Wallace, who is leading the research, told the BBC earlier this year: "We've done a lamb trial recently in which we ... obtained a 70 percent decrease in methane formation."

And Michael Kreuzer, professor of Animal Nutrition at the Swiss Federal Institute of Technology in Zurich, is also researching the effect of introducing feed additives, which he claims could reduce the amount of methane produced by between 10 and 40 percent.

Meanwhile in New Zealand, where agriculture accounts for almost 50 percent of the country's greenhouse gas emissions, scientists are working on reducing methane by getting rid of the microbes in animals' stomachs that produce methane.