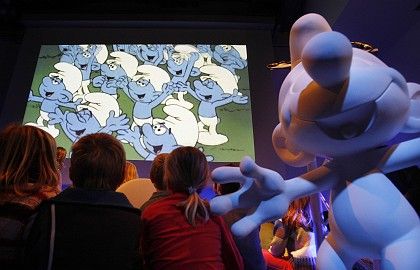 The Smurfs are back -- complete with female Smurfs.

Tra-la-la-la-la-la, la-la-la-la-la. Carefree living, music and 'shrooms. For many, the Smurfs are the perfect realization of Marx and Engel's utopia.

Money means nothing in the 100-strong Smurf society, where property belongs to everyone and there is no currency. Community work is done together. Labor divisions are clear: Handy Smurf (tradesman), Farmer Smurf (agricultural planning), Brainy Smurf (intelligentsia), Harmony Smurf (the arts), and so on.

Everyone is equal, even in age: a spry 100 (except Papa, the supposed embodiment of Karl Marx; he's 542). Only the evil sorcerer Gargamel and his tricky cat, Azrael -- taken to be agents of global capitalism -- can disturb the society's socialist bliss.

There's only one problem with this Marxist utopia -- where are all the women? Until now, the mossy retreat has had only one prominent female resident: Smurfette, with her flowing blonde hair, high-heels, and feminine wiles. (Though no one remembers them, there were actually three female Smurfs, according to the Web encylopedia Wikipedia.)

But now that is all going to change. A new Smurf movie, the first of a trilogy, will introduce a foreign population to the knee-high neighborhood: females.

"There have been dramatic changes in socio-cultural values in the past 20 to 25 years," Hendrik Coysman, head of International Merchandising, Promotion & Services, the company that owns the rights to the Smurfs, said Monday at a news conference in Brussels. "One of these is girl empowerment." Coysman continued: "There will be a greater female presence in the Smurf village, and this will, of course, be a basis for new stories. This will probably turn upside down certain traditional situations within the village."

Malgorzata Tarasiewicz, a specialist on EU policy and gender and the director of the Gdansk-based Network of East-West Women, thinks that the Smurfs can lead by little blue example. "Even in the world of Smurfs it is accepted what many politicians and other decision makers still do not want to realize: that women need to be equal and equally represented," she told SPIEGEL ONLINE Friday. "It becomes a fact difficult to ignore, that women are more visible in the public sphere, in media and in business -- such that even fairy tales must reflect this important civilizational development."

International Merchandising is celebrating the 50th anniversary of the Smurfs in 2008 with a "Happy Smurfday" which runs the entire year. Press conferences in Berlin, Brussels and Paris, an exposition, a giant Smurf zeppelin, a Web site, and a partnership with Unicef -- which will share the profits -- are all part of the celebration.

Details of the upcoming feature film and other surprises are being kept under smurfing tight wraps at International Merchandising. But it is known that the Smurfs' return to the screen, in a computer-animated 3D film set for release in November 2008, is being developed by Paramount Pictures' Nickelodeon Films unit and produced by Jordan Kerner ("Charlotte's Web," "Inspector Gadget").

And with the Smurfs movie rumored to employ the filmic voices of some of Hollywood's most accomplished women, including Sally Field, Lucy Liu, Julia Sweeney, Jessica Simpson and Marisa Tomei, things are about to get a whole lot more modern in the mushroom hut.