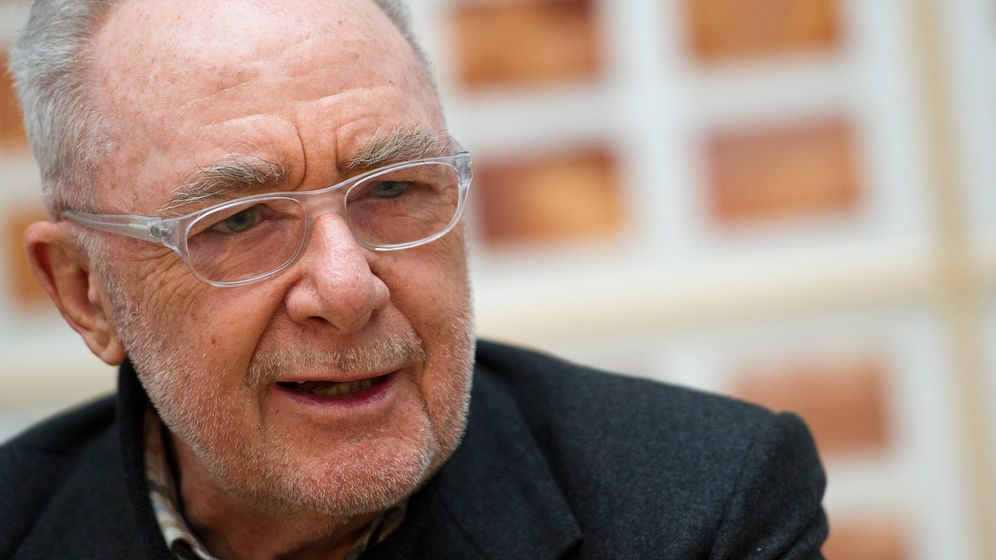 There are certainly painters more eccentric than Gerhard Richter. In fact, he probably numbers among the least eccentric painters in the world. While working, he wears his sleeves crisply rolled up. He applies his paint very deliberately, and he concentrates on the canvas in a keenly focused manner. Indeed, while painting, he looks more like a self-composed surgeon than an artist striving for self-realization.

Of course, Richter has never really needed to cultivate an image as a genius. His art speaks for itself. He is the superstar of German painting, venerated around the world, and his works sell for millions. Richter is particularly well-known for the 15 black-and-white works in his "October 18, 1977" series, in which he depicts four members of the Red Army Faction (RAF), the far-left group that terrorized Germany with assassinations and bomb attacks beginning in the 1970s. The series includes images of three of the members after they were found dead in their cells in Stuttgart's Stammheim Prison on the date that gives the cycle its name. At the same time, Richter is just as well known for a work of a completely different nature: the colorful, cheerful portrait of his daughter Betty.

The elegantly dressed artist has a reputation for being media-shy and somewhat inscrutable. This is the art of his self-presentation -- and the secret to his success: He uses his inscrutability to keep the outside world at bay. Doing so prevents him from being pigeonholed and allows him to keep exploring the whole gamut of styles.

Richter celebrated his 80th birthday on Thursday, Feb. 9. A number of museums are marking this milestone by hosting Richter exhibitions. After spending a few months at London's Tate Modern gallery, the retrospective "Gerhard Richter: Panorama" will now be opening on Sunday, Feb. 12, at Berlin's New National Gallery, where it will remain until May before heading off to Paris's Centre Pompidou. The retrospective includes 140 paintings and sculptures that provide an overview of the impressive range of his works. Among the items on display are non-representational pieces from his early phase, some photorealistic works and a number of large abstract color charts.

Sunday will also see the opening of the exhibition "Gerhard Richter - Editions 1965-2011" in the Me Collectors Room Berlin, a private exhibition space in Berlin's Mitte district. The exhibition comprises roughly 150 works, ranging from graphic prints and artists' books to photographic editions. The latter include the well-known "Ema (Nude on a Staircase)" from 1966.

Meanwhile, the Gerhard Richter Archive in Dresden, where the artist was born, is organizing an exhibition called "Gerhard Richter. Atlas" at the Kunsthalle im Lipsiusbau Museum. The show contains items from Richter's so-called "Atlas," a collection of over 15,000 photographs, newspaper cuttings, sketches and other images that the painter used for inspiration, grouped together on panels.

The painted version of "Ema" is also a prominent part of the "Panorama" retrospective. The image comes from Richter's early photorealistic phase and is based on a photograph of his wife. The painting resembles a photograph taken out of focus because of Richter's trademark blur. The technique lends the image a surreal element and hints at Richter's talent for making the invisible visible: The blurrier the image, the more there is to see in it.

Richter's method of working is inspired by the photorealism movement that emerged from Pop Art. There is his gray series of images of candles, clouds and the Swiss Alps, which are altered reproductions of newspaper photos. His "48 Portraits" series, which was shown in the German pavilion at the 1972 Venice Biennale, was based on the images of famous men in a dictionary. However, the most impressive example of the way that he mixes abstract and figurative painting is his "Vermalungen" ("Mispaintings" or "Inpaintings") series from the 1960s. By gently blurring or sometimes aggressively smearing an image, he creates more reality on the canvas than in the source photo. It automatically stimulates the viewer's imagination, with the result that he or she sees even more.

Since the 1970s, Richter has also painted abstract color charts. "My paintings are smarter than me," he says, in reference to the somewhat unplanned manner in which they arise. With a large rubber squeegee, he applies up to 30 layers of paint on the canvas only to scrape them back off, causing the paint layers to pile up on the canvas like cresting waves. Though he acknowledges its original perfection, Richter says that paint is the starting point, the raw material with which he fashions his works.

Richter's technique is one of constantly testing new things. He wants to maximize the possibilities for using the canvas. He comes up with new perspectives and subjects that leave the viewer flabbergasted. Such is the case with his glass and mirror works, in which one views oneself while momentarily becoming the subject of the painting itself.

Richter describes his works as "commonplace paintings." But he does so knowing full well that the art world passionately disagrees with this modest understatement. Still, despite his age and success, one shouldn't worry that he might lose artistic verve. Indeed, Richter is too curious about the possibilities of painting to ever slow down.