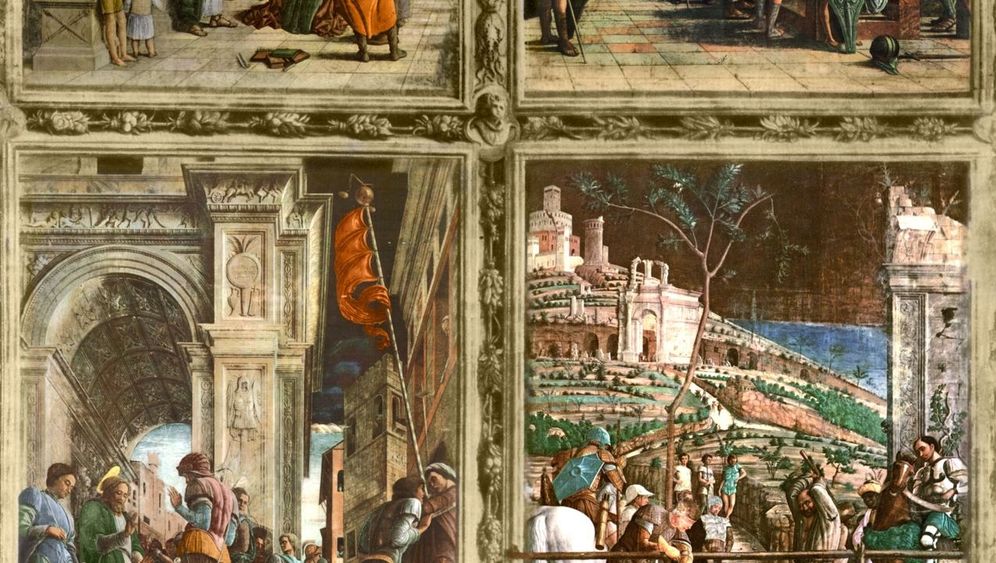 It was an attack with fatal consequences. In 1944 the Allies were fighting German troops in Italy. Worried about the destruction of irreplaceable artworks, officials there issued the Americans a list of buildings to protect. Among them was the Eremitani Church in Padua, home to frescos by Andrea Mantegna (1431-1506) and others.

The colorful fresco inside the church had fascinated many visitors, among them German writer Johann Wolfgang von Goethe. "In the church of Eremitani I saw some astonishing paintings by Mantegna, one of the old masters," he gushes in his "Italian Journey" diary. "What a sharp, assured actuality they have!"

Despite the efforts of Padua officials, however, the fresco was destroyed by an aerial bombing that was meant to target a nearby German barracks on March 11, 1944.

But now a mathematician has made it possible for visitors to marvel at the frescoe -- at least parts of it -- once again in the reconstructed church. Using some 88,000 pieces of the fresco collected from the church ruins, Massimo Fornasier and his colleagues have used computers to restore parts of Mategna's masterpiece.

But just how did they manage to piece together the puzzle of fragments, some of which were no bigger than a €2-coin? For decades, they had been stored in dozens of crates at a Rome archive. In 1992, they were cleaned, photographed and, to the extent possible, sorted. It was the digital photos of the broken pieces that became the key to their reconstruction in the end.

Restaurateurs had a massive task ahead. They catalogued each piece, the average size of which was five to six square centimeters. The total area of the combined pieces came out to 77 square meters, less than one-tenth of the original fresco. The rest of the fresco was irrecoverable after the bombing. It was clear the entire work could not be restored. But mathematician Massimo Fornasier, who now works as professor at Munich's Technical University, developed something that the art historians and restaurateurs lacked -- an algorithm that helps locate the proper placing for each fragment.

"We could have gone about it naively, and simply tried everything out systematically," Fornasier said, explaining that this approach would have meant placing each fragment in every spot on the fresco, then rotating them. But these calculations would have been both costly and time consuming, taking months.

Fornasier's team searched for a method of matching the fragments more quickly, settling on a process mathematicians call "Circular Harmonic Decomposition." The software they developed specifically for the project left out the intricate rotation of each fragment, but still delivered a list of possible positions for them, complete with a probability rating for the chances of conformity. Most of the time the first match was correct, though the team naturally reviewed the computer's results.

Ultimately, Fornasier's team managed what many had thought impossible: They found the original position of almost every piece of shattered plaster that was large enough to be identified. Then they were put back on the church wall. The project, begun in 2000, gained little media attention after its completion in 2006, despite the dramatic advances it showed in the use of mathematical processes in art restoration.

"Such mathematical processes have until know been hardly applicable to the humanities," Hans Georg Bock, mathematics professor at Heidelberg University, told SPIEGEL ONLINE. His university engaged in a similar project to restore shredded papyrus documents, but it was less difficult than the Padua fresco. "We were able to use the grain of the material and the writing," he added.

Another similar project was undertaken by researchers at the Fraunhofer Institute in Berlin to reassemble documents shredded by the feared East German secret police, the Stasi.

To give visitors to the medieval church in Padua some impression of what the original fresco looked like, some of the missing parts were painted in black and white on the wall between the restored fragments, which maintain their color. The result is an image sprinkled through with color on about 10 percent of the original fresco area. But the restoration hasn't pleased everyone. Critics at the influential Italian daily Corriere della Sera lambasted it as what they described as a fake reconstruction.

Virtually, at least, the researchers restored the fresco to its original color using the fragments as a reference. Taken between 1900 and 1920, the black and white reference photos used in the project were of no use for that aspect of the project. "We used a thermodynamic process to estimate the original colors," Fornasier said.

It may be on a computer screen, but now art lovers can finally catch a glimpse at what once made Goethe gush and what the Italian officials had been so keen to protect during the Second World War.