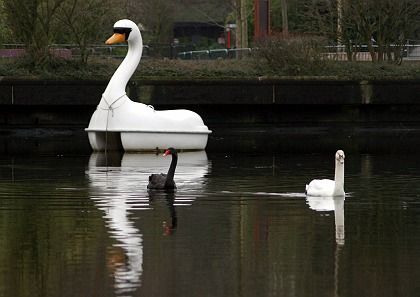 A fowl love triangle: Petra, Paul and a surplus-to-requirements boat.

Nothing is quite so cathartic as discarding the mementos of a bygone romance. But what if the offending objects are not photos and mix tapes, but a giant, swan-shaped pedal boat?

A zoo in the western German city of Münster helped its most famous part-time resident address that issue last Thursday, when it gave away the plastic pedal boat formerly adored by Petra, a female black swan.

Petra found a new flame in December, a real-life swan that shares the pond in the Münster Zoo where she had spent the last two winters beside her beloved plastic vessel. Because she's so enamoured with Paul, as a local paper dubbed the white mute swan, zoo officials decided they could now get rid of the clunky pedal boat.

"Clearly, a lifeless plastic partner no longer plays a role in the life of the tragic swan," the zoo told German news agency DPA.

The rejected craft was sent to a nearby boat rental service, where it will be launched this Friday, a national holiday in Germany, for the beginning of the warm weather season.

Petra gained national fame in 2006 after falling beak-over-wing for the swan-shaped pedal boat she met in a Münster lake. She faithfully followed the boat all summer, and as cold weather drew near, local officials grew worried that Petra might try to stay with her inanimate companion rather than migrate to a warmer climate. So they moved Petra and the boat to a pond at the Münster zoo, and let them nest together in a nearby shack.

The procedure became protocol in 2007, as Petra returned to winter at the zoo after a summer beside her boat on Lake Aasee. But Petra became enamoured with Paul, and soon abandoned the paddle boat and even the heated enclosure the zoo had prepared for her to share with it.

It is unclear whether Petra, who is still at the zoo, has noticed that the boat is gone.