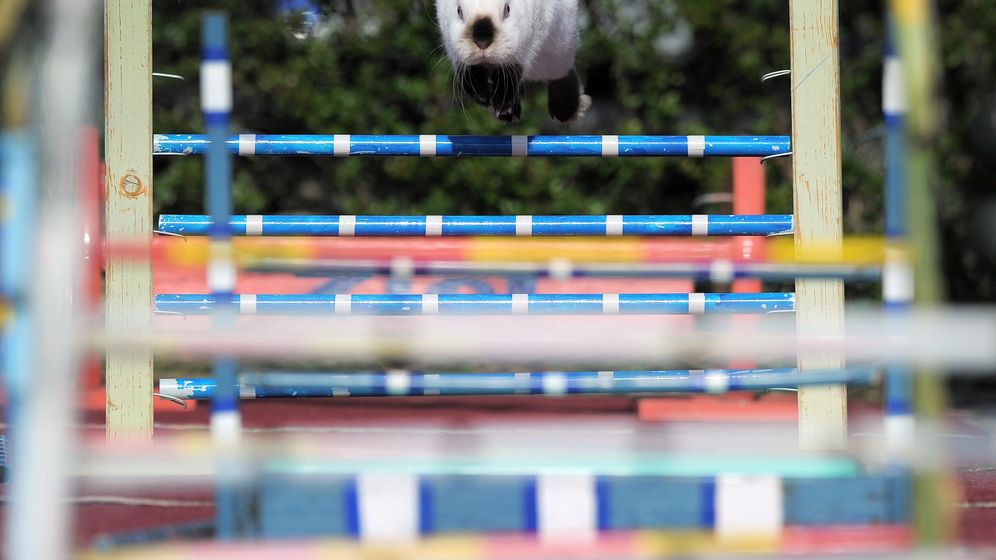 The Easter Bunny has it easy. All he has to do is cart around a bunch of eggs and hide them on Easter morning. The rest of the year? Vacation.

Snoopy, on the other hand, has to work hard for his carrots. The black-and-white bunny from the German city of Jena is the star of the local Kaninhop club -- and he makes his living by leaping over all manner of barricades, jumps and rails. A few times each year, he competes against rabbits from across Germany. With a little luck, he might even make it to the European championships in Switzerland this autumn.

"Snoopy can jump 60 centimeters (about 2 feet) high," says a proud Claudia Fehlen, the 23-year-old founder of the Jena bunny hopping club. "And he has done well in tournaments. He came in second once, and third another time."

That rabbits like to hop, of course, is hardly a secret. Kaninhop, though, involves bunnies barrelling their way through courses consisting of several small jumps of varying height and breadth -- not unlike horse jumping. And it is a hobby which has spent the last few decades slowly spreading around the world from its origins in Sweden in the early 1980s. In addition to several countries in Europe, the pasttime has also become popular in the United States and Canada -- and there are even chapters in Japan.

Competition is, while not exactly fierce, certainly spirited. The more jumps a bunny clears, the better its score. There is also a time element, though rules tend to vary country-by-country.

"As long as you train them, they really like to do it," Fehlen, who has several rabbits involved in Kaninhop, says. "You have to teach them to jump over the hurdles, but at some point they get it."

In addition to the courses, there are also skill events such as long-jump and high-jump. The "world records" are impressive. According to the Swedish site kaninhoppning.se, the world height record is 99.5 centimeters while the best distance is fully three meters.

Fehlen herself got started four years ago after learning about Kaninhop via the Internet. She practiced with her bunnies in the garden before starting her club in 2009. Now, there are 13 members who gather once a week in the eastern German university city for training.

Not everyone is enthralled by the idea of setting up obstacle courses for pet rabbits. A private animal rights initiative in Germany known as Sweetrabbits has criticized the fact that the bunnies which compete in Kaninhop are placed on leashes. The group has even alleged that recalcitrant rabbits are actually pulled over the hurdles with the leashes. Similar groups elsewhere have also criticized the hobby.

Fehlen, though, rejects such criticism. Training, after all, takes place without leashes and they aren't forced over the jumps, or even to participate. "They can just sit and watch," she says. "We don't force them to do anything."

Plus, she adds, there is a very practical reason for the leashes. "We use them in tournaments for safety," she said. "Just think of what would happen if a male were to break free. We want to avoid uncontrolled reproduction. It has happened before."