SPIEGEL ONLINE: Brüno, why do you work as a journalist? Many people don't think of it as a very honorable profession.

Brüno: How can they think that! Thru Funkyzeit, Brüno has alvays done a lot for charity. In Austria each year on St. Josef's Day ve pay for one hundred vorthless beggars to get zeir teeth vhitened und ve're currently raising money to send Sammy Casalli -- ze stylist of Der Pussycat Dolls, to an African village to give one lucky girl a super sexy makeover!

SPIEGEL ONLINE: You're from Austria. Would you mind doing this interview in German?

Brüno: Ich am speaking German. Vhat are you speaking? Vas is wrong vith your accent? Are you mocking me? German is ein wery unwieldy language und ich have plenty of wery important things to say abaus politics und celebrities und other crazy stuff und nicht much time to say it in, so ich will go fast und ich might break ze geschwindigkeitsbegrenzung (speed limit).

SPIEGEL ONLINE: Do you feel comfortable traveling around the world with a heavy German accent? A lot of people like to make fun of German accents -- especially British comedians.

Brüno: Who cares vhat ze English zhink, vhat have zey ever given ze vorld? Ein few scheise plays und some crappy sports they can't even play themselves. Und as for zeir dress sense! Zey look like zey have just been released from prison after thirty years und have picked up someone else's clothes.

SPIEGEL ONLINE: What is your most distinct Austrian-German feature?

Brüno: Ich am not really ein typical Austrian. Ich have avoided following ze Austrian dream, you know -- get a job, find a dungeon, und raise a family in it. Perhaps the most German thing about me is that I'm very efficient und thorough. For instance, Ich can't leave ze haus until I've plucked every hair from mein kugelsack every morning.

SPIEGEL ONLINE: Another entertainer from Austria, Arnold Schwarzenegger, is the governor of California. Are you interested in a career in politics at all?

Brüno: Ich know zis is a sensitive topic in Germany but ze last time an Austrian got involved in politics it resulted in ein horrific var, which resulted in ze annihilation of all major European fashion shows for six years. Ich vill leave ze politischer to Arnie. It vould be awkward for me to go into politics because ve dated in ze early 80's for seven minutes. Ich met him backstage at the Mr. Universe contest in 1983. He was competing for the very last time and was just overweight for his division. He needed to lose seven grams in five minutes -- Brüno was only too happy to help out.

SPIEGEL ONLINE: The fashion industry is having a hard time during the global economic downturn. Do you have any advice as to how designers and their customers could overcome this crisis?

Brüno: Times are hard, but if you shop around und are prepared to vear some things twice before throwing zem avay, it is still possible to look good on a clothing budget of about $20,000.00 a veek. Ich mean, obwiously you vill need a bit more zan zat if you are planning on leaving ze house. In ze fashion vorld, ich suggest advertisers und labels shop around. I mean, vhy don't model agencies recruit from Darfur? For 1% of ze cost of Naomi Campbell u get a genuine Afrikanisher who's twice as skinny, mit half ze attitude.

SPIEGEL ONLINE: The fashion industry takes itself very seriously. So why did you fall in love with this industry in the first place? 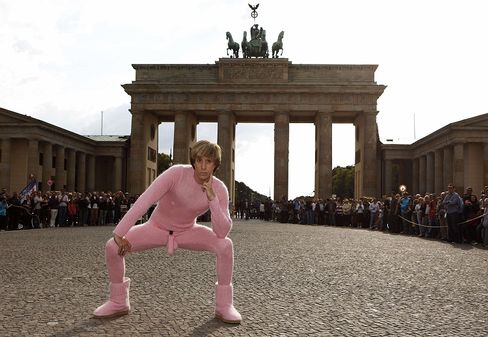 Brüno tried to interview Arnold Schwarzenegger about same-sex marriage, but the former action star made a quick getaway in his car.

Brüno: Fashion is ze only industry where you can be who you want to be, und no-one vill judge you. No vait, zat is black market plastic surgery. Ich vas alvays in love vith fashion -- in ze first Ultrasound picture ever taken of me in mein mutter's womb, you can clearly see zat I'd taken ze umbilical cord und wrapped it round my waste with a knot at ze side, like ein sash. Und most babies first vords are 'mama' or 'dada' -- Brüno's vere, 'I'm gay -- get uber it'. Mein mother vas quite upset -- mainly because as a baby I refused to let her breastfeed me until she'd had a tit job.

SPIEGEL ONLINE: Do you have to be gay to understand fashion?

SPIEGEL ONLINE: As a fashion expert, why is it that so many fashion designers -- Karl Lagerfeld and others -- look and behave like fools?

Brüno: Do not be so hard on Karl, he is actually ein really sweet guy. Ich bumped into him ze other veek in Milan und he said "Boy!" (he alvays pretends to forget mein name, it is like ein big joke) "your clothes make me sick!" Vhat ein compliment -- mein outfit helped Karl Lagerfeld lose weight!

SPIEGEL ONLINE: You caused a lot of trouble at the Fashion Week in Milan last year.

Brüno: Ja, zere vas trouble in Milan. But ich am used to trouble. One time ich vas kicked out of Club Apartheid for spitting at Heidi Klum -- she spilled my seaweed smoothie. How ironisch zat I should be thrown aus of a club called Apartheid - Ich alvays thought that apartheid stood for equality, unity and love for all mankind -- no matter who zey are. Vell apparently I vas wrong.

SPIEGEL ONLINE: How did you manage to get in?

Brüno: Ich can get into any fashion shows, ich have ein visual ticket zat gets me in anywhere -- mein beautiful face. It vas wery easy. People alvays want me at zere shows und clubs. At Club Hiroshima in Salzburg ich am always on ze guest list as 'Brüno minus 2'. Brüno comes in, two people are removed.

SPIEGEL ONLINE: As a "fashion polizist" what do you think of the following celebrities: Heidi Klum, Angela Merkel, Barack and Michelle Obama and Borat, a famous reporter from Kazakhstan?

Brüno: Ich hate Heidi Klum, she's always copying everything I do. I decide to wear angel wings, she wears angel wings -- I move to LA, she moves to LA -- I blow Seal backstage at ze Elle Style Awards, a week later, you do the mathematische. Angela Merkel can never be truly stylish because her surname makes me think of ein angry unvaxed vaginen. As for Obama, it gives me great hope zat, after years of struggle, someone can at last get to ze Whitehouse, despite being incredibly hot. It's slightly disappointing that he needed zat beard, Michelle, to help him -- but vone shtep at a time. Ich saw Borat, to be honest, ich found him to be an offensive stereotype of a foreigner. Borat dresses very badly. He only ever vears ze same suit, it must stink a blocked drain in ein mentalische hospital.

SPIEGEL ONLINE: Have you ever faced a situation where you would have preferred not to be Brüno?

Brüno: Ja ich would. Its so much pressure being me. Millions of people look to me for guidance. It's how Ghandi, Jesus or Timberlake must feel.

SPIEGEL ONLINE: One of the best movies about the power of fashion is "Confessions of a Shopaholic"? What's your opinion on this film?

The interview was conducted by Sacha Baron Cohen in character as Brüno, in an e-mail exchange with SPIEGEL's Martin Wolf.