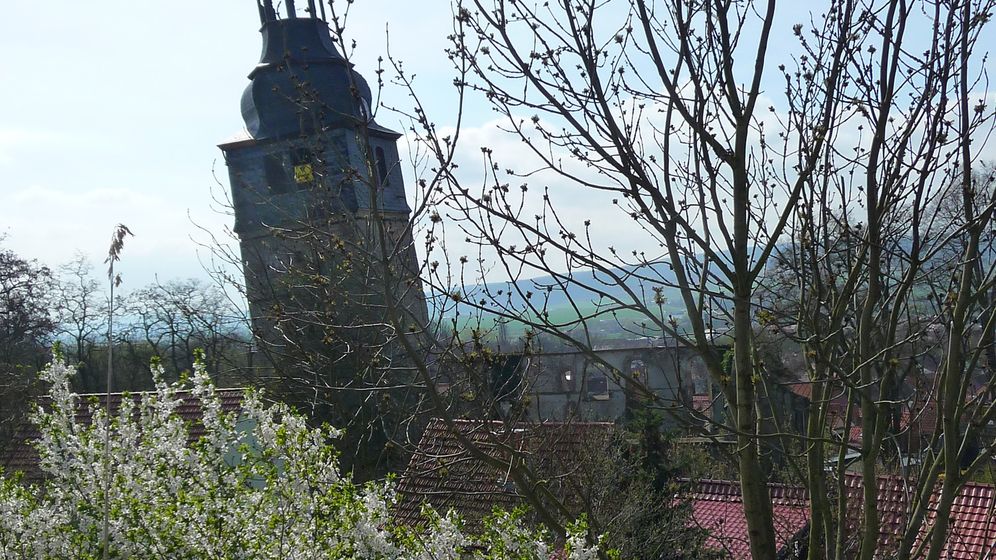 It looks so harmless. The Elisabeth spring winds its way quietly through the park in the center of Bad Frankenhausen, a spa town in the eastern German state of Thuringia. It meanders gently next to mini-golf courses and an empty public swimming pool. Despite its peaceful outward appearance, the spring may soon be responsible for toppling a 2,600-ton colossus. The Elisabeth spring is leaching the earth from beneath the town, and in some places the ground has become dangerously unstable. The most obvious sign of this instability is the steeple of the Church of Our Beloved Ladies by the Mountain.

As far back as 1640, historical documents reported that the church's steeple was slanting. Since then, the 56-meter-high (183 foot) structure has been further subsiding to the northeast. "The last time we measured it, the displacement at the top of the tower was 4.44 meters (14.5 feet) -- in other words, 4.8 degrees," says Tobias Scheffler, head of the surveying department at the Magdeburg-Stendal technical college. "Which means the tower is more crooked than the leaning tower of Pisa." The tourist attraction in the Tuscan city only has a slant of about 3.9 degrees to the southwest.

Together with colleagues at the Freiberg University of Techology's Mining Academy, Scheffler regularly measures the massive stone structure. To do this he has set up a network of around a dozen measuring points, which he uses to determine the degree to which the steeple is tilting. And each year, he and his colleagues determine that the tower is leaning by yet a few additional centimeters. "But it's not a uniform process," Scheffler explains, "it is dependent on what is happening underground."

The Ground in Bad Frankenhausen Just Opens Up

Rainy days can be particularly treacherous because the extra water also washes the plaster out of the ground. Most of all, though, it is the subterranean salt deposits beneath the city that are causing problems. They date back 250 million years to a time when an ocean slowly dried up here under the heat of the primordial sun. Salt layers meters high remained to be covered with sand, gravel and clay later on. Then, around 95 million years ago, the Kyffhäuser hills rose here. Bad Frankenhausen is located on the edge of the range. And where the hills rose, the ground formed cracks and water started to find its way into the deeply buried salt deposits.

Springs started to flow and they brought with them geological problems for the region -- including sinkholes, which occur when subterranean hollows collapse. "We have to deal with a massive amount of leaching," says geologist Frank Rey, a soils expert who has been researching the leaning church tower since the mid-1960s. According to Rey's calculations, the springs at Bad Frankenhausen carry away around 250 tons of salt each day. "I don't even want to think about the implications," the geologist quips.

Bärbel Köllen knows only too well what the porous underground means. The resolute city councilor heads an association that is trying to save the church. At the end of a long, linden tree-lined avenue she waits at the gates of the gothic church. At the moment nobody is actually allowed in, but today Köllen is making an exception.

An unusual sight awaits people who pass through the church's doors. One can look straight up into the cloudless sky and directly at the leaning tower, because the church has been without a roof since 1961. It was removed when it fell into disrepair and has never been replaced. Art treasures, the pulpit and the baptismal font are all long gone, and grass is growing in the nave. Earlier, concerts were given here as well as open-air services under a blue metal crucifix, but they are no longer permitted today. A yellow sign posted right next to the church bears warns: "Danger Area -- Danger of Collapse."

'Time Is Getting Short'

"Time is getting short," Köllen says. Nobody knows how much further the tower can actually lean before it tips over completely. Theoretically the building should be able to withstand a tilt of around six meters. So there should still be time to save it. But what happens if the foundations of the building suddenly give way? Or if the old walls simply collapse?

In the 1990s, several hundred thousand marks were spent stabilizing the tower, and another couple of hundred thousand euros are being spent this century. At first glance, one can see little of the results of this work. There are four steel cables -- each as thick as a human arm -- securing the tower at the moment, but these won't last forever.

A few pipes in the ground indicate where exploratory drilling has taken place. A new plan for saving the tower by a construction company based in Hanover is already months overdue. The company has planted a yellow and black flag proudly on top of the steeple and there is some building equipment parked at the site. But it still isn't clear exactly how the tower will eventually be stabilized. With cantilevers made out of reinforced concrete? Or maybe three metal supports? The around half a million euros still left over is insufficient to cover any of those.

Another possibility might be to fill the holes in the ground with concrete. But even this option has its attendant risks. Just how tangible that threat could be can be seen a few hundred meters down the hill, where the picturesque Kyffhäuser hot spring spa is located. Light comes in through a roof made out of light-colored wood as two dozen senior citizens paddle around in the water, which can be as warm as 35 degrees Celsius (95 degrees Fahrenheit). There are also two mothers with their children. Plastic plants are dotted here and there and on the very left, at the edge of the baths, is a red umbrella belonging to an ice cream seller. This touristy dream scene wouldn't be the same if the ground beneath the church was filled with concrete.

Source of Spa's Success is the Leaning Tower's Curse

"There is salt water in all the pools," explains the spa's boss, Angela Strojek. The Elisabeth spring feeds the pools with the necessary healing waters. In order to prevent it from being too aggressive on the skin or body, the spring water is diluted so that its saline concentration is just 3.5 percent. But the water is still rich enough in mineral content that it can be used to treat skin, joint and respiratory conditions. Indeed, Bad Frankenhausen is a nationally recognized spa that provides medical benefits.

After attempts were made to track the water's source using a green food dye, it became clear that the thermal baths' source was flowing just 25 meters beneath the church tower. Bad Frankenhausen Mayor Matthias Strejc says that if anything is done to endanger the spring, it could also jeopardize the town's official status as a medical spa resort.

The mayor has a problem though: Even if there was a renovation plan that would -- for example, just use concrete to fill in the upper ground levels -- there still isn't enough money available to complete it. "The state of Thuringia has said we won't be getting any more money," Strejc complains. The city could contribute another €150,000, but only if it can raise another €850,000 from other sources. At the moment that is not looking very likely. Now matter how hard they tried, it would be difficult for the church tower association to sell that many pieces of cake at charity benefits.

As long as plans for the church's future remain unclear, efforts to market it as a tourist attraction will be limited. Still, the "Leaning Tower of Bad Frankenhausen" could make for an interesting attraction -- even if a church in the village of Suurhusen in East Frisia (along Germany's North Sea coast) has trumped it by securing the Guinness Book of World Records title for the most tilted tower in the world, with its steeple leaning at 5.2 degrees.

Time is of the essence. If no rescue plan is forthcoming soon, the city's building authority could order a controlled demolition. At least the rest of the city, with a few exceptions, is standing on somewhat safer ground. "There is no acute danger that threatens the ground anywhere where people are residing," Stejc explains.

Some locals would actually prefer to see the building get torn down. As one says, life without the leaning tower would be safer. But others are proud of this symbol of their town. On the gables of a physiotherapist's practice in the Neumarkt area, the church has been drawn in Baroque finery. "We won't give up," a pugnacious Köllen says.

But only few minutes drive outside of town, one can see just how treacherous the church tower's unseen, watery adversary can be. Last November, a giant hole appeared in the so-called Diamentenen Aue, or diamond meadows, between Bad Frankenhausen and the neighboring town of Rottleben.

The ground here is just as porous as the earth beneath the leaning church tower. Not far from the street itself, part of the field recently subsided, giving way to a 12-meter-deep sinkhole. You can still see the crater -- with vertical walls and a diameter of more than 20 meters -- today, and it is barely cordoned off.

When it happened, the sinkhole collapsed instantly and without warning.