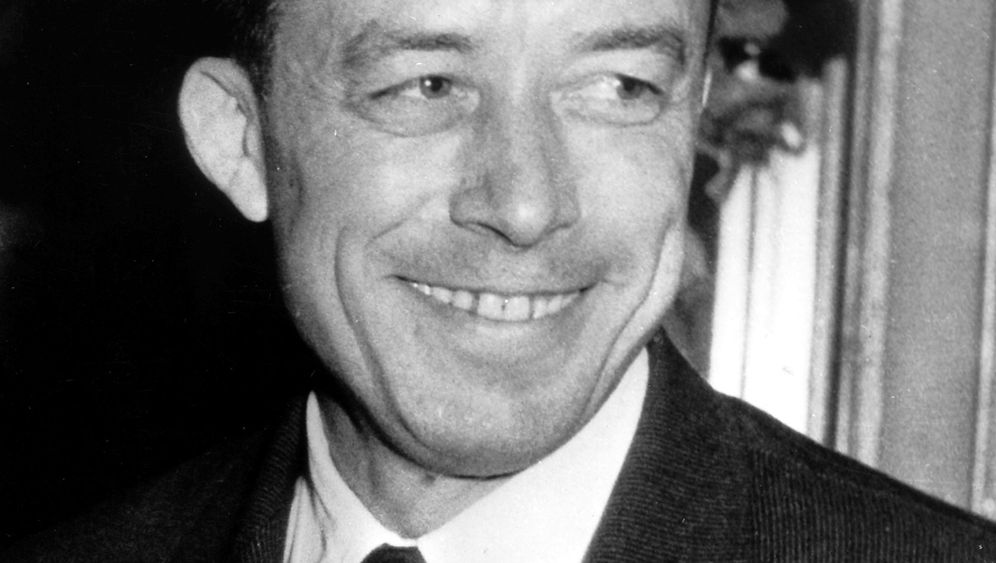 What is a famous man? Albert Camus wrote in his diary in 1946 that it was "someone whose first name doesn't matter." That certainly applies to Camus, who would have celebrated his 100th birthday on Nov. 7, and it can also be said of his great adversary Jean-Paul Sartre, who was eight years older than him, yet outlived him by 20 years.

Camus and Sartre were the intellectual stars of Paris during the postwar years: the existentialists, the Mandarins and the literary vanguard. They became iconic figures of the ideological conflicts of the second half of the 20th century. Their rivalry shaped intellectual debates in France and around the world.

Camus and Sartre's falling-out in the summer of 1952, which was played out in full view of the public, was a signal, a political watershed. The rupture, in the midst of the Cold War, split the camps. For decades, people would say: Sartre or Camus? Should we hope for a better world in the distant future at the price of accepting state terror? The revolutionary mass politics espoused by Sartre in the name of Marxism would seem to contain this tradeoff. Or should we refuse to sacrifice people for an ideal, as Camus' humanist principles required?

Camus and Sartre basically stood in each other's way right from the beginning. They were both storytellers, playwrights and essayists, literature and theater critics, philosophers and editors in chief. They had the same publisher. They both were awarded the Nobel Prize for literature. Camus felt overwhelming gratitude when he accepted his award in 1957. Sartre loftily declined the designation in 1964 - making sure to underscore that he was not insulted "because Camus had received it before me," as he said at the time.

The Company of Women

They were long seen as friends and allies. But Camus could not hide that he felt a growing sense of distance from the clique of Parisian intellectuals surrounding Sartre and his companion, Simone de Beauvoir. No matter how much he debated with the others, and spent long nights drinking, dancing and seducing, he remained the wistful loner.

Sartre was envious of the idolized and good-looking French Algerian, the "street urchin from Algiers," as he later called him. Sartre saw himself as a child of the French bourgeoisie -- and he strove to break its bonds as demonstratively as possible. By contrast, Camus was proud of his humble origins and never denied his roots.

The two ambitious men met personally for the first time in the midst of the war, in occupied Paris during the summer of 1943. Camus introduced himself on the occasion of the premiere of Sartre's play "The Flies." At the time, a small group of artists and philosophers met regularly in private homes and in the cafés of Saint-Germain-des-Prés in the heart of Paris. But rivalries soon surfaced, long before the public was privy to any intellectual competition. The conflict, no surprise, often had to do with women.

Sartre once asked himself if he didn't seek out women's company "to free myself from the burden of my ugliness." In early 1944, he wrote a letter to his lifelong companion de Beauvoir, informing her of his victory over ladies' man Camus. It had to do with a certain Tania, whose sister put in a good word for him: "What are you thinking, running after Camus? What do you want from him?" he'd had the sister tell her. He, Sartre, was so much better, she'd said, and such a nice man.

The tone was still friendly, at least for the time being. When Sartre traveled to the United States in 1945 and spoke about "new literature in France," he presented it as the "result of the resistance movement and the war," adding that "its best representative is 30-year-old Albert Camus."

In the spring of 1944, Camus became the head of the clandestinely printed newspaper Combat, and even after France was liberated by the Allies and the publication was legalized, he remained its editor-in-chief for many years. His lead articles were the talk of the town in Paris, and his reputation as a journalist in the French resistance helped him gain fame and recognition.

Sartre, who founded the periodical Les Temps Modernes (Modern Times) in 1945, sought to win over Camus to further his notion of socially responsible writing, or littérature engagée. In the underground, the resistance had learned that the freedom of the word had to be defended, Sartre noted, and now it was time for writers to become "completely committed" to political issues in their works.

And Camus was outraged in 1946 when Sartre rejected his moral concerns about the Soviet Union by arguing that while the deportation of several million people in the USSR was more serious than the lynching of "a single Negro," the lynching resulted from a historical situation that had lasted much longer than the Soviet Union.

A quarrel erupted, but it was initially limited to a relatively small group of intellectuals. Attempts to justify sacrificing people for a higher ideal were anathema to Camus. On one occasion, he slammed the door behind him when he left a private meeting.

Camus used literature as a means of defending his own position. In his novel "The Plague," published in 1947, he wrote: "But I was told that these few deaths were inevitable for the building up of a new world in which murder would cease to be. That was true up to a point, and maybe I'm not capable of standing fast where that order of truths is concerned." This is bitter irony and reveals a growing sense of acrimony between Camus and Sartre.

By now, Camus had reached the height of his fame. "The Plague" sold hundreds of thousands of copies and was a worldwide success. What's more, his essay "The Myth of Sisyphus," published in 1942, remained a widely read and internationally debated work during the postwar years.

As a writer, Camus, the boy from Algeria who studied philosophy at the University of Algiers, had outdone his rival Sartre, the elite student from the Ecole Normale Supérieure.

With Camus' philosophical masterpiece "The Rebel," a book-length essay published in the fall of 1951 that maps out a humane future for mankind, the writer once again presented himself as a theorist. But he didn't anticipate the bitter opposition of the Parisian intellectual scene surrounding Sartre.

There was still enough mutual respect for an advanced printing of a chapter ("Nietzsche and Nihilism") in Les Temps Modernes, but what followed was utter silence. Camus was waiting for a follow-up, and the editorial team was well aware of that. After a while, Sartre assigned a late critique of the work. A young staff member, 29 years old, was given the job. This was no friendly gesture, particularly since the reviewer was out to score points. He tore Camus to pieces.

The thin-skinned Camus, who was certainly no stranger to polemics, was deeply offended -- and he made the mistake of sending a long rejoinder. What followed was a tragic dissolution of what had once been a friendship. Camus, who was a member of the Communist Party for a period in his younger days, vehemently rejected the insinuation that he had become a right-winger, just because he was applauded from that side of the political spectrum and refused to call himself a Marxist.

His rebuttal was to ask what position his adversaries intended to take on Soviet Communism and Stalin's crimes. What good did it do "to theoretically liberate the individual" when one allows "man to be subjugated under certain conditions"?

Sartre felt challenged. His response, which was printed in the same issue, was merciless. It is insidious and malicious, yet also a magnificent masterpiece of personal polemics. This repudiation from the hallowed halls of politics and philosophy aimed to injure: Sartre wanted to squash Camus.

Already in the first sentence, Sartre severs all ties: "Dear Camus, our friendship was not an easy one, but I shall miss it." This is a mockery in view of the allegations and viciousness that follow, culminating in the ironic questioning of Camus the theorist: "What if your book simply shows your philosophical incompetence?" Then he jabbed: "And if your reasoning is inaccurate? And if your thoughts are vague and banal?"

Sartre gives himself away. "Yes, Camus, like you, I find these camps inadmissible, but equally inadmissible is the use that the 'so-called bourgeois press' makes of them every day." Just as inadmissible? The gulags and coverage of them in the press? This demanded a response. Camus wrote a rejoinder, but he left it in a drawer.

Camus no longer wanted to play along. He was paralyzed by "this sudden eruption of long repressed hatred," as he later wrote to his wife. He retreated from the battlefield. "Upstarts of the revolutionary spirit, nouveau riche and Pharisees of justice," he wrote in his diary of the intellectual scene, adding: "There is deception, denigration and the denunciation by one's brother."

When Camus received the Nobel Prize years later, he appeared relaxed in his response to a question about his relationship to Sartre at the press conference in Stockholm: "The relationship is outstanding, monsieur, because the best relationships are those in which we do not see one other." In interviews and speeches he underscored once again that he always believed a writer could not evade "the tragedies of his time."

"We, the writers of the 20th century, will never be alone again," he said in Sweden. "On the contrary, we must know that we cannot escape the common misery, and that our only justification, if there is one, is that we -- to the extent that we are capable of doing so -- speak for those who cannot."

Viewed from today's perspective, it's easy to see that history has proved Camus right. But until the day of his death, he felt that he was a beaten man who was despised by the main leftist currents in Europe. Sartre, who was not particularly bothered by the new wave of show trials in the Eastern bloc, emerged from the battle the champion -- and, years after Camus' death, became the icon of the student protests of 1968.

Sartre basked in his popularity, marched at demonstrations, spoke to striking workers and allowed himself to be arrested. He defended the Chinese Cultural Revolution, showed sympathy for dictators, like Castro and Kim Il Sung, and for the acts of terrorism committed by the German Red Army Faction (RAF).

In an interview with SPIEGEL in 1973, Sartre said: There are revolutionary forces that he finds "interesting, such as the Baader-Meinhof group." But he said that they probably appeared "too early." In December 1974, he visited Andreas Baader at the prison in Stammheim.

It's possible that Sartre might have spared himself certain aberrations if his beloved adversary had still been present as a critically admonishing counterpart.

When Camus, 46, died in a car crash in January 1960, Sartre wrote a stunning tribute. "For all those who loved him, there is an unbearable absurdity in that death," he said. Now, Camus was suddenly indispensable: "Whatever he did or decided subsequently, Camus never would have ceased to be one of the chief forces of our cultural activity or to represent in his way the history of France and of this century."

Fifteen years later, and five years before his death, Sartre, 70, was asked again in an interview for Les Temps Modernes about his relationship to Camus. His answer: Camus was "probably my last good friend."