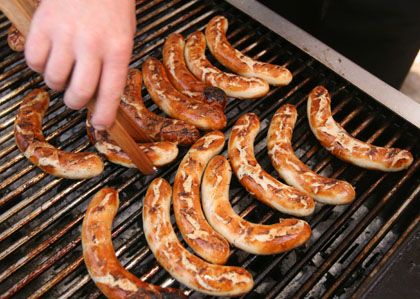 Petrol is for motor vehicles, not sausages.

Two men trying to barbecue on their balcony on Saturday evening ignored some elementary rules on sausage cooking, police said.

The men, enjoying the sunny spring weather with their wives, couldn't get the coal to light with their lighter liquid so the 37-year-old host decided to pour a glass of petrol on it instead.

That did the trick. "The resulting darting flame made him drop the glass of petrol. That in turn startled his 28-year-old friend who dropped the petrol canister, which contained between three and five liters, onto the floor," police in the southwestern German city of Kaiserslautern said in a statement.

The burning liquid ran off the balcony onto the host's car which burst into flames. The fire then engulfed his wife's car next to it as well another car parked on the other side.

"The fire was put out by the fire brigade. The total damage amounted to around €30,000 ($46,000). Whether the people involved will ever barbecue again in their lives is unclear," police said in the statement.