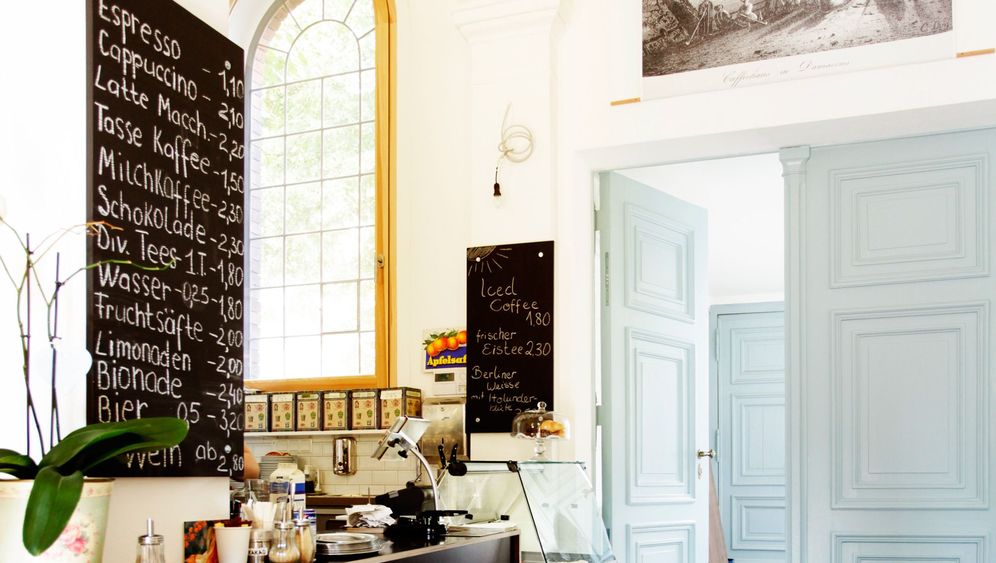 "But no dead people were laid out here, right?" The two elderly ladies standing at the cake counter wanted to know exactly what happened here. "Oh yes, corpses were laid out right here," replied the waitress, Johanna Helmberger, suppressing a smile.

Many visitors to Café Strauss in the the Kreuzberg district of Berlin ask her that. It doesn't lessen the ladies' enthusiasm. "It's great! We'll come again," said one while paying.

Helmberger, 29, has a full house. Groups of pensioners, a middle-aged couple, two women with babies and a young man with a laptop. It's a cold, rainy November day and the café, located inside the walls of a cemetery in the Kreuzberg district of Berlin, offers a view of wet headstones and family tombs. It doesn't sound cheerful. But the guests are chatting away contentedly.

Cemetery cafés are becoming increasingly popular, not just for people seeking solace and the comfort of coffee and cake after visiting a relative's grave. Tourists visit them too, as well as people out for a walk. There are modern ones like Café Strauss, and ones that host music performances and art exhibitions, like Café Fritz in Hamburg or the Atrium Café in Bristol in western England.

And near Vienna's famous Zentralfriedhof cemetery, the Schloss Concordia café serves Schnitzels in an ambience every bit as solemn as its immediate surroundings.

Connecting the Living and the Dead

The Strauss has the austerity of a morgue combined with the austere elegance of a church, with white walls, square pillars and high arched windows. The managers, Olga and Martin Strauss, opened their café on the Friedrichwerderscher Friedhof cemetery in May. They carefully restored the room and gave it dark wooden chairs and brass coffee jugs. It has the same menu as any ordinary café, with tea and coffee specialities, an assortment of cakes and sandwiches. The only difference is its proximity to a lot of dead people.

"There were some people -- very few -- who were concerned their relatives wouldn't be able to rest in peace," said Martin Strauss. But the café has proved to be so popular that some visitors are already asking for grave lots that can be seen from its terrace.

The café "creates a wonderful connection between the world of the living and the dead. It helps," one guest wrote in the visitor's book. The clientele includes the cemetery gardner, workmen who maintain headstones and the local priest.

"One always thinks of those who've died," says Bernd Bossman, a 53-year-old actor who set up the first cemetery café in Berlin, the Finovo, in 2006. "But one should also spare a thought for those who look after the cemetery and visit it." Visitors need to eat and drink, visit the bathroom but above all, they need to communicate, he said.

A Jumble of Different Styles

The tables in Bossman's café on the St Matthäus cemetery in the Berlin district of Schöneberg are laid with hand-embroidered tablecloths, knickknacks crowd the window sills and the furniture is a jumble of different styles.

"It was all donated by visitors. Things they no longer need or that were left by people who died," said Bossmann. Sometimes guests find themselves drinking coffee from a cup that used to belong to their late grandmother. Famous graves here include those of the Brothers Grimm.

Authorities see cafés as a way to attract more visitors to cemeteries. But they have rules to ensure that dignity of the sites is preserved. They mustn't advertise their presence in the street outside the cemetery, and the opening hours must be the same as those of the cemetery. There are plans for two more cafés at cemeteries in Berlin, including at the Dorotheenstädtischer Friedhof, a famous graveyard in central Berlin where the writer Heinrich Mann and the playwright Bertolt Brecht are buried.

There are also plans for a café in Munich. Even though one could call it a trends, the cafés will never attract party crowds. "People who shun the theme of death won't like it here," says Bossmann.