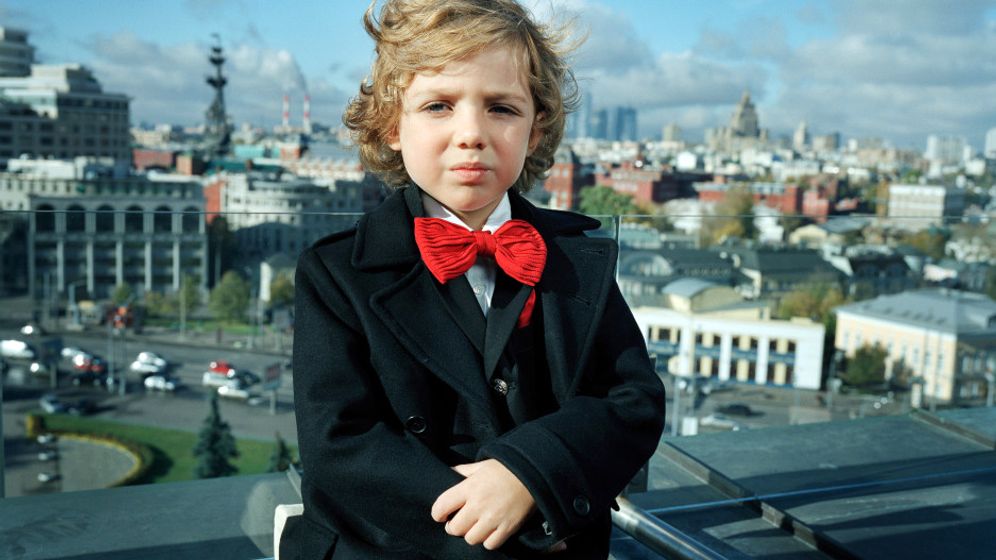 Photo Gallery: The Children of the Russian Rich

SPIEGEL ONLINE: Ms. Skladmann, your photography book "Little Adults," a collection of your photographs if the children of the Russian elite, comes out in July. How did you gain access to this normally hidden world?

Skladmann: Two years ago, I got to know a little girl. Nastia was eight years old at the time and she became a kind of muse and a door opener. She would call me up and I would take photographs of her, sometimes in her parents' English teahouse, sometimes in the Moroccan bath. She also invited her half brother to the shootings, and later I got to know her friends.

SPIEGEL ONLINE: How did the parents react to your presence?

Skladmann: I was very young when I began the project. The parents saw me as being on a similar level to their children. Many seemed to see me less as a professional photographer and more as a student. One of the conditions of the photo-shoots was that I not publish the last names.

SPIEGEL ONLINE: Your images often depict the children as being surrounded by a bizarre form of luxury. One of them, Lisa, is seen in the middle of a crystal palace, where she also plays football. Another, Jakob, is holding a Kalashnikov with a picture of ballerinas behind him. Did the children pose themselves?

Skladmann: The portraits are staged, but in the children's natural surroundings. Prior to taking the photographs, I interviewed the children briefly in an attempt to find out what their dreams were, what they wanted and how I could show that. Vladimir, for example, explained that he wanted to become an archeologist. I then showed him some pictures from a museum. Later, he decided that he'd rather be Spider Man. In the end, I photographed him on the stage of his grandfather's theater.

SPIEGEL ONLINE: How many children did you photograph?

Skladmann: It is interesting that German journalists primarily ask about the children of the rich oligarchs. In reality, I didn't just take pictures of children of the super-rich, but also children of the Russian elite. Their parents are successful restaurateurs, but also actors and members of the Moscow intelligentsia. It is the first generation that was born into the prosperity of new Russia.

SPIEGEL ONLINE: None of the children in your book are smiling. Is childhood missing from your pictures of children?

Skladmann: I wouldn't say that. But they live in a secluded world. Some leave that world, to go to a public ballet school, for example. Their parents are attempting to make up for the Soviet times -- they only want the best for their children. They receive private language lessons, they go swimming or play tennis. The lives of these children are very planned and regimented. That forces them to grow up quicker.

SPIEGEL ONLINE: How does that become apparent?

Skladmann: Yana, for example, is nine years old and already speaks perfect English. When I wanted to photograph her, her parents were not at home. But Yana called in the servants and also told both her Russian nanny and her British nanny what to do. I really had to battle with her for authority. Prior to the shooting, she had laid out the clothing she wanted to wear. She knows 100 percent what she wants and I am eager to find out what she will become. The photo that we chose for publication was one that I took after she had become tired of the shooting and wanted to relax.

SPIEGEL ONLINE: You followed some of the children for several years. Did the cosmos of the Moscow elite change during that time?

Skladmann: It is a world that tries to find itself anew each day. It changes every year. Styles change on an almost daily basis, always dependent on what influences have managed to reach Moscow. People travel much more than they used to and parents orient themselves increasingly toward the West. Many children take French courses outside of school, others go to boarding schools in the West.

SPIEGEL ONLINE: Were you ever able to feel the pressure they are under to follow in the footsteps of their parents?

Skladmann: No, they are much too young for that. They are merely under pressure to get good grades in school, just like children everywhere.

10 Bilder Photo Gallery: The Children of the Russian Rich