Berlin is a city that has marketed itself on its edgy alternative image, but in reality the German capital is increasingly becoming like many other European cities. One of the hallmarks of its vibrant alternative culture had been the city's many former squats. But on Tuesday another one of these self-styled "house projects," or experiments in alternative living, bit the dust.

On a mild November afternoon around 600 police officers descended upon the alternative house project at Brunnenstrasse 183, clearing out a total of 21 people from the dilapidated five-story house in central Berlin. The expected outbreak of violence by left-wing extremists didn't happen. The closest it came to a showdown was when a few of the occupants climbed onto the roof and waved Anti-Fascist flags. 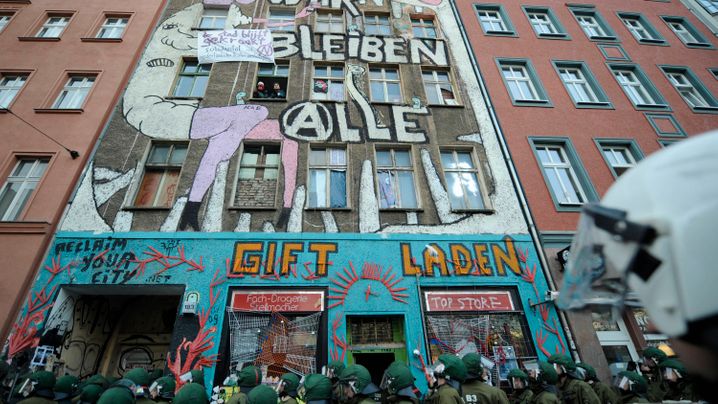 The police were taking no chances when they arrived at the scene at around 3 p.m. and immediately blocked off the busy street. After escorting the occupants out of the building they broke all the windows to stop people coming back to re-occupy the building in the mid-winter and placed floodlights in front of the house. Police President Dieter Glietsch defended the huge operation. Speaking on Berlin radio on Tuesday he said: "Our experience has taught us that we can avoid problems if we present a sufficiently strong force."

The clearance on Tuesday was the finale of a star-crossed story that goes back decades. The house, in the former East Berlin district of Mitte, had stood empty immediately after the fall of the Wall. Then a group of young people emulated many others and moved in to set up an experiment in communal living. They established a bar and the well-known Umsonstladen ("For Nothing Shop"), where locals could donate things they didn't want and pick up stuff for free. The house was like so many other similar projects, part political, part utopian, part the convenience of free accommodation.

However, many of the former occupants are long gone, having moved on to other house projects or to their own apartments. And more are said to have moved out in recent months once it became clear that the building's days were numbered. All the legal efforts of the occupants to hold on to it had failed after it was sold to a private owner in 2006.

For years the so-called "squatters" had in fact been paying rent, first to the local housing authority and then to the owners. But then house was sold to a real estate firm and the real problems began. That firm went bust and the house was put up for auction.

The occupants decided to try to buy the house themselves, but when the date came for the auction in 2006 it emerged that it had already been sold to Manfred Kronawitter, a doctor based in the Bavarian town of Passau. The doctor had sought to find some kind of compromise, saying he would be willing to give up the house if the city provided him with a similar property in the area. However, that never happened and the eviction order was issued. On Tuesday, another of the city's infamous squats disappeared.

The hey-day of Berlin's squatting scene is long past. There had already been a long tradition of squatting in the edgy Kreuzberg area of West Berlin and once the Wall came down, many of these squatters migrated to East Berlin to take advantage of the plentiful empty spaces there. However, a huge eviction took place as early as November 1990. The massive operation saw squatters from a group of houses on Mainzerstrasse build barricades and engage in running battles with riot police. The uproar that followed led the newly reunited city to reassess the way it dealt with the "occupied houses" (Besetzerhäuser) and this in turn led to a partial legalization of squats in both East and West Berlin.

Slowly but surely, many of the illegal residents came to agreements with either the city or private owners of the buildings, and began to pay rent and utility bills. For the city authorities the squatters were a way of keeping the buildings "alive" by preventing them from becoming derelict. However, a conservative-led city government in the late 1990s pushed through the eviction of a number of house projects.

Nevertheless, there are still a number of different "squats" dotted around the former East, particularly in Friedrichshain, but also Mitte and Prenzlauer Berg. Most are marked by an attempt at a kind of communal living. For example, some have shared kitchens and residents are expected to eat and cook together at least once a week. Most houses have weekly meetings and those who would like to move in are first vetted.

However, the house projects have usually been more than just a place to live an alternative lifestyle -- the residents have established clubs and bars such as in Supamolly and Schokoladen, cinemas, like at K77 on the trendy Kastanianallee and galleries and performance spaces such as in Tacheles, a former department store near the busy Friedrichstrasse.

Many of the projects are at risk of eviction. However, others are now owner-occupied. For example, the house on Grünberger Strasse 73 in Friedrichshain, which boasts a vegan "VoKü" (Volksküche or people's kitchen) at the weekends, was bought by the residents in 2004.

Yet these remaining squats differ in many ways from their predecessors of the 1980s in West Berlin. "There was a strong attempt by those squatters to do community work, to get involved locally," explains Simon Teune, a research fellow at the Social Science Research Center in Berlin, who specializes in protest and social movements.

Few of the remaining former squats in Berlin make an effort to replicate this. There "is less open sympathy in the wider community for them," Teune explains. However, there are exceptions. For example in Hamburg, a group of artists recently squatted an area in the city center to prevent it being sold off to investors. "This got a lot of support in the cultural scene there," Teune points out.

Yet in Berlin the once-thriving scene is long past its prime. "The spaces are getting fewer and fewer. There is less political will to come to some kind of accommodation with the squatters." Teune says that this has lot to do with the city's changing self image.

"Before, it was part of the city's image that those with alternative lifestyles had a place here." Artists, political activists, and those avoiding military service, something that was possible in the former West Berlin, were all drawn to the city for this reason.

The decision to move the capital from Bonn and the subsequent decision by many companies to establish offices has seen this self-image changed significantly, Teune argues. "The city has got a lot blander."