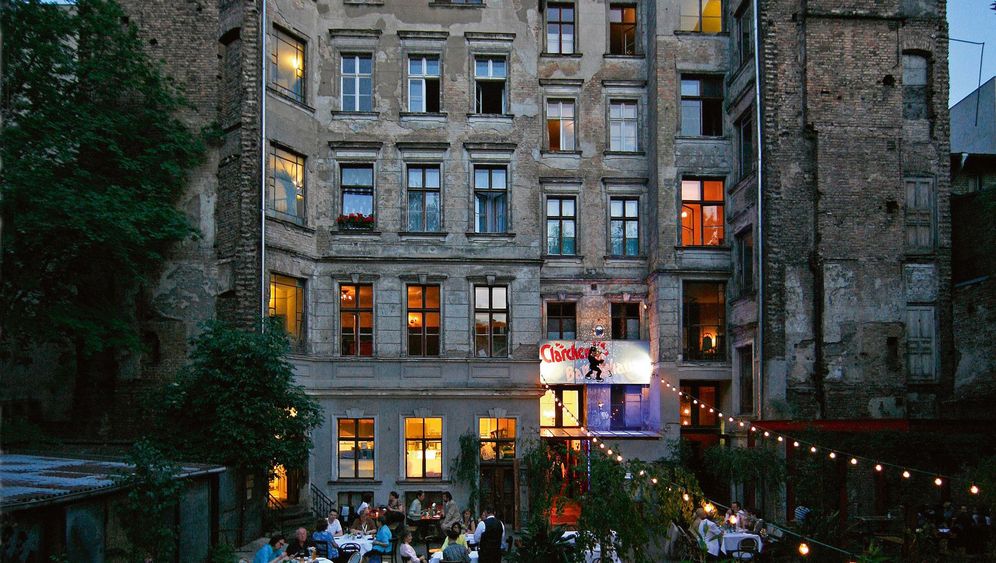 There's always a bit of a traffic jam at the entrance of Clärchens Ballhaus. That's because once people enter Berlin's most beloved dance hall, they're often astonished by what they see.

Past the coat check, manned by the same mustachioed gentleman for 45 years, they find a living time capsule. Dark wood paneling covers walls flanked by candlelit tables and antique bars, and at the center of it all, worn by decades of shimmying and shaking, is the dance floor. If the doors are open, there are almost always people on it.

Young, old, gay, straight, locals, tourists, good dancers and bad -- there is something about Clärchen's that makes just about everyone feel at home, drawing in people who might otherwise never meet. Perhaps it's this inclusive spirit that has kept it afloat through the upheavals of the last century. After surviving two World Wars, life behind the Berlin Wall and the momentous changes seen by the German capital since reunification, on Friday Clärchen's celebrates its 100th anniversary.

"It's a place that exists outside of time that is accessible to all," says Marion Kiesow, whose book on the dance hall's turbulent history was published this spring. From the furniture and decoration to the customs, fashions and dances favored by generations of patrons, it's a "museum for everyday culture," she says.

Built in 1895, the once-grand building has been through a lot. But despite its battered appearance, it maintains a certain shabby dignity, much of which could be attributed to its namesake. On Sept. 13, 1913, businessman Fritz Bühler founded the dance hall with his wife Clara, better known by her diminutive nickname "Clärchen," calling it Bühlers Ballhaus. "From the beginning, Clara was wearing the pants around here," Kiesow says. One of the first women in Berlin to get a driver's license, the shepherd's daughter from the country was "resourceful and capable."

With World War I already on the horizon, these qualities would get her family and the dance hall through hard times to come. Clara was a tough businesswoman, and Kiesow writes that "the ballroom was her life," though she didn't particularly enjoy dancing herself. She ran it with "Prussian discipline," but was fair to employees. Even after her stepdaughter Elfriede Wolff took over management following the death of Clärchen's second husband in 1967, she was known to keep watch with a "soldier's bearing" from a table in the corner.

During their peak, there were some 900 dancing establishments in Berlin, then already known for its nightlife, though just a few have survived. With such fierce competition, Clärchen's dance hall on Auguststrasse in the city center had to find creative ways to attract customers. After the war ended in 1918, "Aunt Clärchen," as many called her, held events for widows, who danced with each other because men were scarce. Meanwhile, the opulent upstairs ballroom was rented out for outlawed sword fights that often left the floor covered in blood.

Then came the boom of the 1920s, when the war-weary populace was in the mood for fun, and the foxtrot and jazz were all the rage. In 1929, Fritz Bühler died, leaving Clärchen herself a widow, and by the mid-1930's her name was hanging above the old Bühlers Ballhaus sign outside. In 1932, she married her second husband, Arthur Habermann.

The rise of the Nazi Party brought restrictions to the kind of music and events allowed at places like Clärchen's. Not long after the dance hall celebrated its 25th anniversary in 1938, Clara came face to face with paramilitary forces in the midst of carrying out the Kristallnacht attacks on Jews. According to Kiesow, she stopped them from destroying a storefront in the building by telling them that she owned the building, and the Jewish renter owed her money. Later, Clara is said to have regularly brought food to the Jewish widow of a former barman who hid from the Nazis in a nearby apartment.

The author, who says she fell in love with the ballroom after first coming to dance, conducted many interviews and sifted through public records and private papers found in soggy crates in the cellar of the building. "This building holds onto its secrets," she says. "I searched extensively to tell its story. I heard countless life stories, and all of these stories crossed paths in this dance hall at some point … A lot of emotions have passed through this hall. It brings people back again and again."

'It's Where I Met My Beloved'

One of these people is Lona Jakob. At a spry 91 years old, she is the oldest regular guest at Clärchens Ballhaus. It's where the former ballerina met her late husband in the 1940s, and where she returned late in life after his death to rediscover her love of dancing. Now, she dresses up in sequins and heels (despite breaking her leg not long ago) to come dancing here with friends and her daughter every Sunday. And now, as then, she always waits to be asked to dance.

"The second time my future husband asked me to dance, he sang to me all the lyrics to a new song that played. It became our song … and they played it today and I was so happy," she says, eyes shining. "I love it here because it's where I met my beloved."

Not long after Jakob first visited Clärchen's, Nazi dancing bans began, and the ballroom closed its doors again in 1942. German troops later used it as a command center, leaving stacks of maps that Clara would later repurpose for calculating bills and covering tables when linens were hard to come by. In February 1945, the front part of the building and part of the mirrored upper ballroom were destroyed by an Allied bombing raid, and Clara temporarily blinded herself fighting the flames.

Nevertheless, after Russian troops used the dance hall as a stable for a time, it reopened in July 1945, less than three months after German forces surrendered to the Allies. Once again, women found themselves dancing with women in what remained of the bombed-out building.

Clärchen's was located in the Soviet-occupied sector which became communist East Berlin. The war rubble from the front building wasn't removed until 1965 and the dance hall gradually went into decline, gaining a rather seedy reputation for prostitution and black market dealing. That attracted spies from the feared East German secret police, the Stasi.

"The dance hall had a bad reputation during the Communist era," Kiesow says. "But that didn't start until after Clara's death in 1971. She never would have tolerated it, though it also probably had to do with the new culture of the 1970s."

A Backdrop for Life

The decline continued until 2005, when Christian Schulz and David Regehr took on the dance hall's management, restoring it to its current popularity. "It was totally lifeless," Schulz says. But the duo, who both have a background in theater, still recognized something special in the building and its history. "We see it as backdrop for life. For eating, drinking, dancing, falling in love, celebrating, listening to music -- all of the beautiful things in life," he says.

Now, the ballroom offers dancing lessons, hosts concerts and events, and serves food in a lush beer garden built where the rubble of the destroyed front building once lay. On Friday and Saturday nights especially, the sweaty dance floor is packed with a euphoric cross-generation crowd until dawn.

There is no shortage of superlatives when people describe the significance of Clärchens Ballhaus to them. It's an "oasis" where people can be whoever they want, says Schulz. "Many generations have come in and out of this place. There are traces of it everywhere," he says. "It's rooted in the city's culture and keeps telling its story like a fairy tale."

Kiesow says it embodies the "essence of Berlin" and is a "microcosm" of history.

But at her wise old age, perhaps Lona Jakob, who says she's lived her life based on emotional instinct, puts it best. "Clärchen's just makes people happy," she says before heading back to the dance floor.