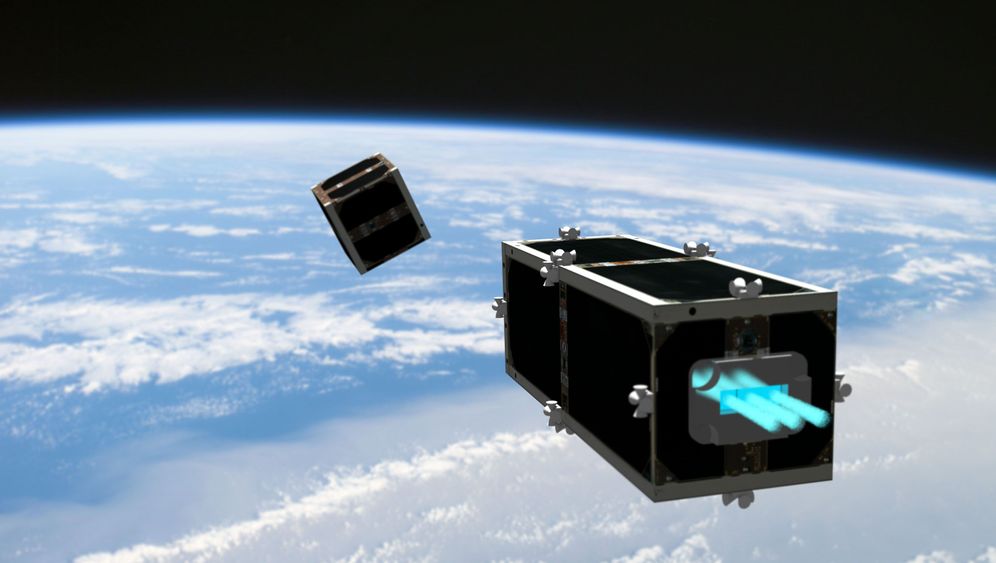 Donald Kessler's vision was a rather ominous one. Twenty years ago, the NASA consultant envisioned a scenario in which space junk blocked humans from traveling in space. The risk of colliding with such heavenly detritus, he argued, would one day make it too dangerous for astronauts. He warned that the number of hazardous objects could multiply by breaking apart, hopelessly trapping mankind on Earth.

Tens of thousands of little pieces of space junk are already orbiting the planet. But now a project from a nation known for orderliness and cleanliness aims to prevent Kessler's nightmare scenario from becoming reality. On Wednesday, researchers at the Swiss Space Center, based at the École Polytechnique Fédérale de Lausanne (EPFL), presented their plans for "CleanSpace One." They envisage a launch of their clean-up mission within the next three to five years, with the aim of taking out a recently-discarded satellite. If it proves successful, further space cleanup jobs could follow.

The Deadly Dance of Satellites

The EPFL researchers intend to test their technology on one of the country's flagship projects in space. "We have our eyes set on a clear target," Swiss Space Center head Volker Gass told SPIEGEL ONLINE. "We initially want to start with one of the two satellites that Swiss universities launched in 2009 and 2010."

The two mini orbiters known as "Swiss Cube 1" and "TISat 1," which are cubes with 10-centimeter (four-inch) sides, belong to the class of so-called picosatellites. Universities like to use these low-cost flying devices to give their students real-world experience in using satellites. For example, universities in Würzburg, Aachen and Berlin have their respective satellites "Uwe," "Compass" and "BeeSat" orbiting the planet at distances between 600 and 700 kilometers (370-430 miles).

But, at a certain point, these satellites either die or outlive their usefulness. Of course, they could just be left alone in their eternal orbits. But not everyone thinks that's the correct choice. "Universities across the world have to clean up their junk, too," Gass says. And "CleanSpace One," he says, should help them do it.

The proposed cosmic disposal service will be only slightly larger than the flying objects it targets for destruction. While traveling at 28,000 kilometers per hour (17,400 mph), it will approach and catch its target using a technique reminiscent of the one that sea anemones use to catch their prey. "It sticks out its feelers and pulls its prey to its chest at the right moment," Gass explains. Once that is done, the dance becomes deadly: The conjoined satellites race toward Earth together and burn up upon re-entry into the atmosphere.

What's more, since it will probably only measure 10 by 10 by 30 centimeters, getting "CleanSpace One" into space will be relatively inexpensive. "There are so many ways to launch small satellites," Gass says. "For example, the new European 'Vega' rockets would be a good possibility, especially since the project was supported by Switzerland." But he also thinks that an Indian rocket could do the job.

Space junk is naturally of concern to space-travel heavyweights. For example, the German Aerospace Center (DLR) has drawn up plans for a "Deos" satellite that could also dispose of larger counterparts. But it's anybody's guess whether the orbiter will ever make the leap from the drawing board into space.

Currently, space junk is usually just watched. US Strategic Command, the Department of Defense command whose mission includes space operations and missile defense, keeps a constantly growing list of all the disused objects in orbit. And the Europeans intend to build up their own radar capabilities for that purpose. Just a few days ago, the DLR reported a successful testing of a high-powered laser system that might even be able to detect space objects that are only a few fingers wide. Despite their miniature size, even these objects can prove dangerous to satellites and the International Space Station (ISS).

"It has become essential to be aware of the existence of this debris and the risks that are run by its proliferation," says Swiss astronaut Claude Nicollier.

High Time to Clean Up Space

One of the most attractive aspects of the "CleanSpace One" project is that it will reportedly be downright cheap. Initial estimates put the costs for both its production and launch at 10 million Swiss francs (€8.3 million/$10.8 million).

If the "CleanSpace One" ever really makes it off the ground, the project would arrive at the right time. Just a few months ago -- or roughly 20 years after his first warning -- Donald Kessler started signaling the alarm again. As the head writer on a recent report by the National Research Council (NRC), he warned that the amount of junk in space has reached a "tipping point."

The report warned that there are already so many small pieces of space debris that they are in constant risk of slamming into each other and splintering even further.

When it comes to man's mess in space, Kessler says, "we've lost control of the environment."