Barely a week goes by in Germany without a news story about a human encounter with wild boars -- joggers getting chased up trees, boars smashing their way into living rooms and tearing up the furniture, even whole hordes of the shaggy beasts rampaging through village streets. Last year, two police officers were so scared of a marauding boar that they leapt onto a low balcony and opened fire on it with their service revolvers. They missed.

It's not the boars' fault. The species of pig may look fearsome with their big heads, short legs and tusks that can grow to 20 centimeters (eight inches). But they are naturally shy animals and only become aggressive when they feel trapped or threatened. Confrontations with humans have become commonplace because the wild boar population is exploding across Europe as a result of human activity -- global warming and radical changes in agricultural land use. 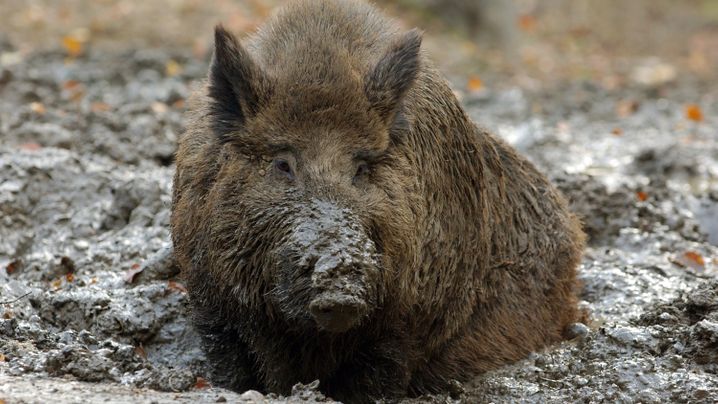 In Germany, hunters shot a record 450,000 boars in the 2008/2009 season, which runs year-round beginning on April 1, according to figures from the German Hunting Federation (DJV). That was up by a third from the previous season and gives the best available indication of the population. The total number of boars roaming the forests, suburbs and maize fields of Germany is now estimated at between 2 million and 2.5 million.

It's the same story in France, where 500,000 boars were shot last year. In Poland, it was 200,000, and their numbers have also been increasing in Austria, Switzerland, the Netherlands and the whole of eastern Europe, Torsten Reinwald, a biologist and expert on wild boars at the DJV, told SPIEGEL ONLINE. And boars are also thriving in Asia and the Americas.

"Wild boars are the clear winners of climate change and of the change in nature caused by humans," said Reinwald. "But it's wrong to say there's a plague of them. We have 4 million hares in Germany, and they're still on the endangered species list."

Gorging on Maize and Acorns

Warmer winters in recent years have reduced the death rate of older boars and of young ones born late in the year, and the rise in carbon dioxide levels has intensified the sunlight and led trees to produce more acorns and chestnuts -- a high-energy delicacy for boars, whose reproduction naturally increases with the amount of available food.

"A sow can produce a litter of up to eight piglets per year," Reinwald said. "And because their reproduction depends on weight rather than age, we're seeing boars of just nine months -- mere teenagers -- producing young."

Boars also have a penchant for maize and rapeseed, now being grown in vast quantities for biofuel. In Germany, the switch from traditional small fields with varied crops to gigantic swaths of agricultural land devoted just to one crop has provided wild boars with veritable hypermarkets in which they can gorge themselves after the winter, Reinwald said.

In the eastern state of Brandenburg, there are maize fields eight square kilometers (almost 2,000 acres) in size. "You can't spot wild boars in there," Reinwald said. "They have shelter, water and food."

A total of 27 percent of Germany's surface area is devoted to cultivating just three crops -- wheat, rapeseed and maize. Add to that all the woodland, which covers more than a fifth of the country, and you have a vast area in which boars can frolic and flourish.

They roam in close-knit, well-organized groups, also known as sounders, of around 20, and they are led by sows. Boars have been known to grow to a weight in excess of 200 kilograms (440 pounds), although the average adult weight is between 50 and 90 kilograms.

It's not surprising that they are doing so well. They eat anything from discarded pizzas and doner kebabs to maize and acorns, and they're highly adaptable. Despite their weight, they are agile and can reach speeds of up to 50 kilometers per hour (31 mph) over short distances. They are also excellent swimmers and are renowned among hunters for their intelligence.

One sign of their brainpower is the tactic they adopt when devouring maize. When they enter the fields, they leave the outer edges of the field intact, presumably to hide what they're doing, hunters say.

Their ability to learn also shows how clever they are. "They have a well-organized social structure, and if the lead sow senses danger, they all follow her. They know the routes used by hunters, and when they hear the sound of car doors slamming, they immediately retreat to the edges of the hunting area and hide in reeds until the danger has passed," said Reinwald. "They know, 'if we go there, we're safe.'"

It's not that they can read the signs. But they have a keen instinct and they learn from observation.

Roaming boars cause some 25,000 traffic accidents in Germany per year, but that's just a fraction of the 200,000 crashes involving deer, Reinwald adds. The damage to crops and the danger they pose to herds of domestic pigs -- such as transmitting swine fever -- are bigger problems.

The invasion of cities is also causing concern. Berlin has a wild boar population estimated at between 8,000 and 10,000. They are frequently spotted digging up gardens or trotting along train tracks and quiet streets. "People make it worse by feeding them," Reinwald said. "In Berlin, buses avoid some stops because boars hang around there begging, just because someone decided to put out maize for them."

When cornered, they show fierce courage, especially if they're protecting their young. In fact, boars have been known to smash their way through electric fences in a blaze of sparks. "That may also be due to short-sightedness, though," Reinwald admitted.

In Texas, which has similar problems, officials plan to use poisons and chemicals against them. But Reinwald says hunting is the only effective way to reduce their numbers: "Poisons and contraceptives will only do more damage to the environment, and they don't work."

Dear to the German Heart

Germany's 350,000 registered hunters have their hands -- and gun magazines -- full trying to cull the boar population. Group hunts with beaters and dogs and 30 or 40 hunters are most effective, but it still takes an average of 16-18 man-hours to kill one wild boar.

Moonlit, snowy nights are best, when the dark outlines of the beasts are easily visible against the bright ground and bare trees. Machine guns would probably reduce the man-hours involved, but they are banned from German forests.

Besides, despite all the marauding and hunting, wild boars are dear to the nation's heart. Their adaptability and intelligence inspire a great degree of awe; but, above all, it's their close association with the German forest -- so deeply rooted in the Teutonic psyche -- that gives them a special status here. "Wild boars belong here; it's a symbolic animal for Germany," Reinwald said.

And, of course, they make good sausages, too -- another thing dear to the German heart. "Their meat is considered a delicacy," Reinwald said. "But with the increase in hunting, the price of wild boar meat has dropped. In eastern Germany, you can get a kilo for less than a euro ($1.50)."