The scene is dimly lit and the viewer cannot clearly see the man and woman who are obviously engaging in sexual activity. Finally, the face of the man comes into view. It's none other than Adolf Hitler. A slogan appears: "AIDS is a mass murderer."

The new campaign, an initiative by Regenbogen ("Rainbow"), a German charity that aims to educate the public about HIV/AIDS prevention, uses famous mass murderers from history -- including Hitler, Josef Stalin and Saddam Hussein -- to highlight issues around HIV/AIDS. They developed a series of posters and videos together with the Hamburg-based advertising agency Das Comitee. Even before their official launch, the new materials were available online and have already come in for hefty criticism -- not to mention a high rate of clicks.

In the UK and US, there have been many comments made about the tastelessness of the ad campaign. "Of course there are many HIV organizations that run their own campaigns," a spokeswoman for the National AIDS Trust, which co-ordinates World Aids Day in Britain, told the Daily Telegraph newspaper in the UK. "However, I think the advert is incredibly stigmatizing to people living with HIV who already face much stigma and discrimination due to ignorance about the virus." 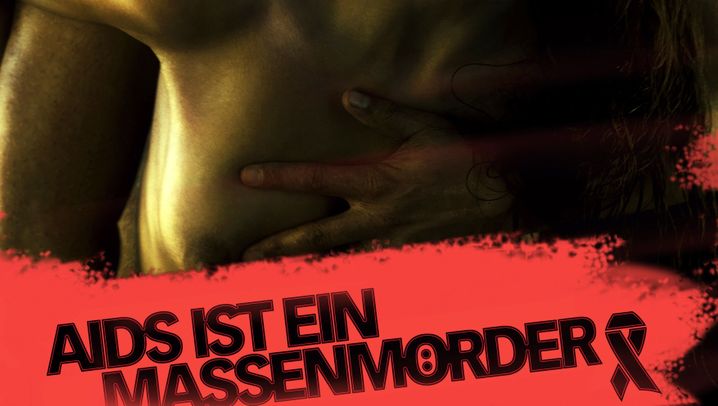 The organization is concerned that this kind of campaign will discourage people from being tested for the disease because they may feel as though they themselves are "mass murderers." Additionally the videos have been criticized for not giving any real information about how to prevent the disease.

However, the producers of the campaign don't understand what all the fuss is about. They see the fact that the campaign has attracted this sort of attention and that the videos are being watched thousands of times on YouTube as a sign that their plan is working.

On the campaign's Web site they reason that: "Up until now 28 million people have died. And every day there are 5,000 new cases. Which is why AIDS is one of the most effective mass murderers in history."

"We wanted to give the virus a face, not the victims of the virus," Dirk Silz of Das Comitee explained to SPIEGEL ONLINE. "We expected that the campaign might overstate the case somewhat -- we wanted it to attract attention." Silz felt that previous campaigns by a government agency featuring vegetables with the slogan "Don't Give Aids A Chance," did not have the same effect.

Silz rejects accusations that the video is not explicit enough when it comes to instructing people to take preventative measures. "There is the advice 'Protect Yourself!' Anyone who doesn't know that condoms can protect against AIDS is still living in the Stone Age."

Silz describes the video campaign as a "radical step." However, the use of Hitler in HIV/AIDS information campaigns is nothing new. The Munich-based organization Aidshilfe had a campaign at the beginning of the year with the unmistakable slogan "The Penis as Dictator."

Jan Schwertner, press officer for Regenbogen, has taken pains to emphasize that "we are not the first who have linked the topics of AIDS and dictators." In other words, the approach is not original, but it was clear that the campaign was calculated to shock and could be expected to outrage some people.

"We are working with the shock effect. The sensory overload through the media means that many things fall under the radar," Schwertner told SPIEGEL ONLINE, in reference to the "vegetable" campaign. "The strategies for HIV/AIDS prevention have to be reassessed," he said, adding that young people in particular have reacted positively to the new campaign.

For the point of view of Regenbogen, the campaign has been a success. As the old saying goes, there is no such thing as bad publicity.

Schwertner is quick to point out that no one who works for the association feels discriminated by the campaign. It is the illness and not those who are HIV positive that is being depicted as a mass murderer, he says.

Regenbogen feels it knows what is behind the objections from abroad. Most likely the British organizations fear that they will lose donations because the publicity surrounding the campaign could see money flowing into the German association's coffers instead of into that of the British AIDS Trust.

So are the British just jealous of their Hitler campaign? "AIDS is an illness and not politics," says Schwertner.