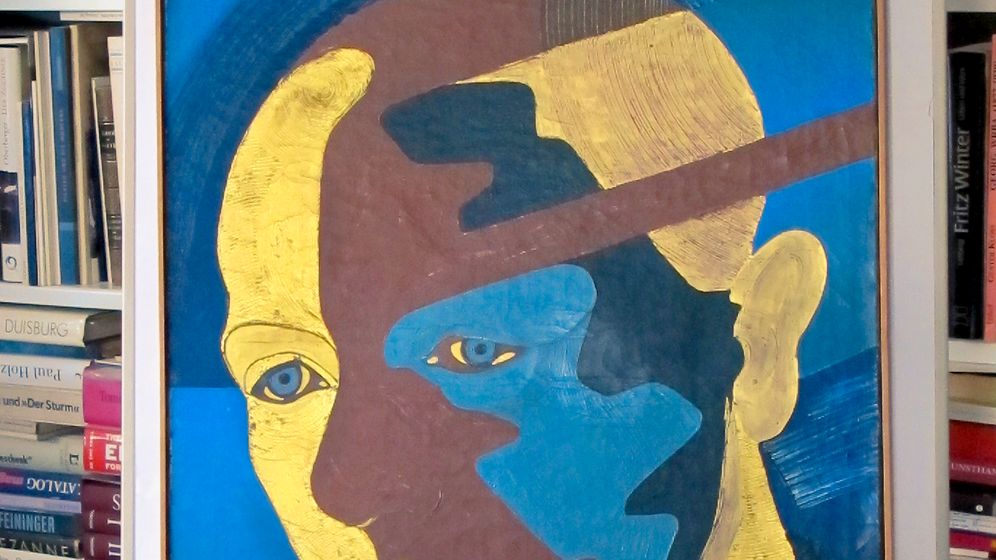 The establishment known simply as "Das Café," in the western German city of Krefeld, celebrated an anniversary a few weeks ago. The city's bohemian community, its artists, hedonists and students -- and those aspiring to join them -- have been getting drunk there for the last 30 years. Photos of popular guests adorn the walls. A prankster has written the word "Wanted" on the portrait of one former regular.

It is a photo of Otto Schulte-Kellinghaus, one of the bar's original guests, who once dreamed of becoming the Andy Warhol of the Lower Rhine region. He is now in detention awaiting trial at a prison in Cologne's Ossendorf district. He has been charged with commercial and organized fraud.

This is the fourth arrest in one of the biggest art forgery scandals in postwar Germany. Also imprisoned in Cologne-Ossendorf are Wolfgang Beltracchi, another former regular at "Das Café" in Krefeld, and his wife Helene. Her sister Jeanette was arrested and then released on bail in November.

Investigators suspect that Schulte-Kellinghaus, Beltracchi and the two women have sold at least 44 apparently forged paintings since the mid-1990s. The accused attributed almost all of the paintings to artists from the first half of the 20th century, including Heinrich Campendonk, Max Pechstein, Fernard Léger, Max Ernst and several others. Most of the works were sold with the story that they were part of the art collection of Cologne businessman Werner Jägers, who was the grandfather of the two suspected sisters. Jägers was said to have bought the works from the renowned art dealer Alfred Flechtheim and hidden them on his estate in the Eifel Mountains of western Germany during the Nazi years.

The investigators accuse Schulte-Kellinghaus of having placed 14 of the 44 presumably forged paintings on the market, many of them via galleries in France. They included works by Max Ernst that were apparently so expertly forged that even Werner Spies, an art historian and Ernst expert, declared seven of them to be authentic. And the story Schulte-Kellinghaus used to market the paintings is remarkably similar to Beltracchi's story. He claimed that the paintings, which were supposedly lost, were from the collection of his grandfather, the master tailor Knops from Krefeld.

The Beltracchi's attorneys are not commenting on the charges at the moment. Rainer Pohlen, Schulte-Kellinghaus's attorney, has likewise remained silent.

But the scandal has already caused turmoil in the world of auctioneers, gallery owners and art historians. The trade in works by the classic artists of the 20th century was considered a lucrative business, especially after the end of the boom for contemporary art. The works are scarce, prices are rising and values seem to be stable. All that's missing is an adequate supply of new works. It is certainly possible that, when it came to works with unclear origins, people involved in the trade were not always interested in the whole truth.

Until now, investigators believed that the accused had been active since 1995. But SPIEGEL has learned that Beltracchi's career as a presumed master forger began much earlier -- in the 1980s. Based on files from former investigations and statements of his acquaintances, it appears that Beltracchi provided at least 15 additional paintings, starting in 1985 -- bringing the number of suspicious works up to 59. Beltracchi's attorney refused to comment on this development too. The documents also show that Beltracchi could have been caught in 1996, when the Berlin State Office of Criminal Investigation was on his trail. But the agents were unable to catch him.

In Search of Paintings

Wolfgang Beltracchi was born Wolfgang Fischer in 1951, later taking the name of his wife Helene. He grew up in the small city of Geilenkirchen near Aachen in western Germany. His farther worked as an art restorer and church muralist until business became so erratic that he was forced to paint houses to make ends meet. His son Wolfgang was also a very talented painter. After finishing school, he completed an aptitude examination and, in 1969, was accepted at the Aachen School of Design, where he apparently acquired basic training in the Graphics and Illustration Department.

Although three of Fischer's acrylic paintings were featured in the Grand Art Exhibition in Munich in 1978, the young painter was only moderately successful working under his own name. At the time, he wore John Lennon glasses and drove a Harley-Davidson. At an antique show, Fischer met a wealthy Düsseldorf real estate agent and, in 1981, the two men founded an art marketing company, Kürten & Fischer fine arts GmbH.

While the businessman contributed the capital, Fischer scoured the art and antique markets of Europe, constantly in search of attractively priced paintings. His preference at the time was for the old Flemish masters. Fischer went to auctions in Brussels, Paris and Cologne, traveled to the famous Dorotheum auction house in Vienna, and to London, where he acquired, for his company, two paintings at Sotheby's in October 1981, one by Jan Tengnagel and the other by David Teniers, paying 4,795 British pounds for both.

Former associates recall that Fischer also brought along canvases and frames that he could use in his art restoration. They also say that he sometimes touched up the paintings he had purchased, using two rooms that had been converted into studios in the attic of a house on Kapellenstrasse in Aachen.

In July 1982, less than 12 months after establishing the company, Fischer and his partner parted ways. According to the minutes of a shareholders' meeting, the real estate agent said: "Substantial losses were incurred as a result of the purchases of paintings at auction." A short time later, the financier, who held a majority of shares in the company, terminated Fischer without notice. He accused Fischer of having "recklessly sold off paintings at rock-bottom prices," of "grossly neglecting his duties as a managing director" and of not properly accounting for the paintings.

A Flood of New Paintings

A few months later, the real estate mogul's house was broken into. Apparently the burglars, who were never identified, had a key to the house and knew that its owner was on vacation in the south of France at the time. They cut several paintings by old masters out of their frames and also stole a painting that Fischer had bought for the company -- a work supposedly painted by the Flemish artist Pieter Brueghel the Younger.

The burglarized real estate agent saw his supposed Brueghel more than four months later, in the classified ad section of the magazine Weltkunst, where it was being used in an advertisement for an auction in Lower Saxony. The real estate agent notified the police, who managed to recover some of the paintings from the burglary, including the supposed Brueghel, which in reality was probably a forgery from the 19th century. Investigators determined that an antique dealer in Aachen had submitted the paintings for the auction. He had only one arm and was known in the city as "Goldfinger," because he drove a Mercedes with a gold-plated bumper, while the bumper on his wife's car was only silver-plated. Sufficient evidence for a trial never turned up.

Fischer was still leading a shady existence at the time. The police later discovered that in August 1984, Fischer and his girlfriend Regina moved into an apartment on Hofstrasse in Krefeld, where they kept a low profile. In the wake of his failed business venture in the field of Flemish painting, Fischer was apparently in financial difficulty.

An old friend introduced him to a Berlin antique dealer named Marc W., also from Aachen, who could not be reached for comment last week. One of Marc W.'s business associates told the Berlin police that Fischer delivered at least 15 paintings between 1985 and 1988, including works supposedly by Georges Valmier, Tamara de Lempicka, Ernst Wilhelm Nay and Victor Servranckx.

According to the business associate, the first work Fischer delivered was an oil painting titled "Erigones and Maera," supposedly painted in 1930 by Johannes Molzahn, an Expressionist who fled from the Nazis and emigrated to the United States.

But the search for a buyer proved to be difficult. Molzahn had died in 1965 and had fallen into obscurity. Marc W. hired a young student in Berlin to help him find potential buyers for the painting. The student was Clemens Toussaint, a well-known art detective today who works on restitution cases worth millions, and who insists that he had not suspected that the Molzahn painting was a fake. Marc W. eventually sold the work in November 1985 to a collector from Kassel in central Germany, for 27,500 deutschmarks, in cash. "The painting was legally imported into France from Poland. I purchased it from the previous Polish owner," Marc W. wrote on the purchase agreement.

Meanwhile, other supposed Molzahns were being magically produced on canvases in Krefeld. Fischer would spend his evenings with Otto Schulte-Kellinghaus at the café on Tannenstrasse, sometimes introducing his friend as "Count Otto," another art lover.

Business was booming. In 1987, Marc W. sold two new "Molzahns," the "Portrait of Oskar Schlemmer" (1930) and the work "Energy Relaxed" (1919). The latter was sold for 80,000 deutschmarks to a Berlin gallery owner and was soon exhibited as part of a show of German Expressionist art in museums in Los Angeles, Düsseldorf and the eastern German city of Halle.

In the fall of 1987, W. sold the Schlemmer portrait to Molzahn's widow Loretto, and had the purchase price -- 60,000 deutschmarks -- transferred to an account with Berliner Sparkasse. The painting was exhibited at the Lehmbruck Museum in the western city of Duisburg in the summer of 1988, as part of a show called "The Paintings of Johannes Molzahn."

A fourth "Molzahn" from the Fischer source was sold in the late 1980s. The painting, called "Linear Color Compositions," went for 15,000 deutschmarks. But apparently a dispute erupted over commissions between Fischer and his Berlin partners. They severed their ties to Fischer in 1988 or 1989, according to police records.

After that, a heroin-addicted draftsman supplied the Berlin dealers with forged Molzahns and other supposed originals.

The fraud wasn't uncovered until 1995, when the Kassel collector who had bought "Erigones and Maera" hired the Munich-based Doerner Institute to complete a scientific analysis of several supposed Molzahn paintings. The analysis revealed that three paintings were fakes, and all three had been supplied by Fischer. When analyzing the painting "Linear Color Composition," allegedly painted in 1920, the experts discovered pigments that hadn't been available until 1957.

The defrauded collector and Molzahn's widow filed a criminal complaint with the Berlin State Office of Criminal Investigation. In 1998, art dealer Marc W., a business associate and the draftsman were given suspended sentences.

Fischer, however, who had married Helene Beltracchi in the interim and had taken her surname, had disappeared. In July 1996, when the police made inquiries at his last reported address in Oberhausen, near Krefeld, the landlord said that the painter had left a few months earlier to travel around the world in his camper. The landlord said he had no idea where Fischer was or when he was coming back. Even had they found him, the investigators could have made little headway -- the fraud from the 1980s would already have fallen under the statute of limitations.

Otto Schulte-Kellinghaus, the Krefeld Warhol admirer, was also not very helpful. When the police questioned him in 1996, all "Count Otto" could tell them was that he was not aware that Fischer had had connections to the art world or was dealing in paintings.