The German nutcracker -- the bearded, wood-carved soldier who stands to attention in households around the world at Christmas waiting to bite the shells off walnuts -- faces growing competition from cheap Chinese copies that are threatening eastern Germany's centuries-old woodcraft tradition, the industry's leader has warned.

The nutcracker was invented in the Erzgebirge or Ore Mountains, a range of hills along Germany's border with the Czech Republic, in the 19th century. Tucked in the wooded valleys of this sparsely populated, scenic region, craftsmen and women assemble ornaments under the Erzgebirge brand name that has become synonymous with German Christmas. 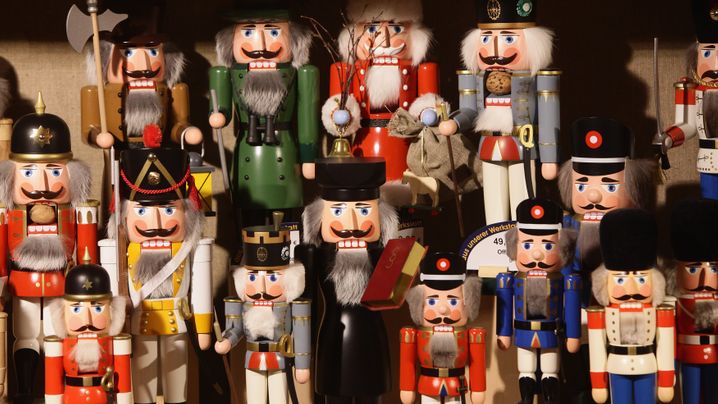 They also invented the Räuchermann or Smoking Man, a wooden figure that emits smoke through his mouth or through a pipe from incense candles placed on a metal plate in his stomach. And the Christmas pyramid, a carousel containing angels, choirboys or nativity figures sent into slow, hypnotic rotation by the heat from candles that drive wooden rotor blades.

Few other manufacturers in Germany dare to compete with the delicately carved and painted Erzgebirge products. But Chinese-made replicas have been appearing on Christmas market stalls in recent years at a fraction of the price, and they're getting so good that the untrained eye can't tell the difference. Dieter Uhlmann can, however. He's the chairman of the Association of Erzgebirge Craftspeople and Toy Manufacturers.

"Often you'll find Chinese nutcrackers can't actually crack nuts, they'll fall apart if you try," Uhlmann told SPIEGEL ONLINE. "I know most people just use nutcrackers for decoration but they should be able to do their job. It's hard to tell the difference between Erzgebirge and Chinese-made with smaller products, but it's quite easy with the bigger, more complex ones because they don't work as well."

At a Christmas market along West Berlin's Kurfürstendamm boulevard this week, one stall was selling imported pyramids for around €30 -- about a quarter of the price of an Erzgebirge pyramid. The figures were a little more crudely carved and painted and were covered in an unappealing shiny varnish -- but at a distance of a few meters, it was hard to tell the difference.

Uhlmann said imported replicas are squeezing sales of Erzgebirge products which have been falling gradually since 2002 and are set to reach some €50 million ($73 million) this year. The industry consists of some 300 small firms, many of them family-run or one-person workshops.

Business has also been hit by the global economic crisis and the strength of the euro, which has led to a sharp drop in exports to the United States and Canada, the biggest foreign market for Erzgebirge crafts, said Uhlmann. Japan is the second-biggest export market, followed by European countries.

"We're trying to persuade customers to make sure that they're buying the right thing. If they don't take a proper look, they'll buy something made in China and think they got a bargain made in the Erzgebirge," said Uhlmann. It's not the first traditional German product to be copied -- Bavarian Lederhosen leather breeches are also being manufactured cheaply abroad, to the consternation of Alpine folk purists.

Uhlmann's association has tried to counter the problem by printing stickers that say "Original Instead of Plagiarized" for outlets such as retail stores and Christmas market stalls. It has also launched a marketing campaign called "The Art of Living," supported with public funds from the eastern state of Saxony, to enhance the profile of the region's woodcrafts. The tradition is so deeply entrenched that the job of wooden toymaker is a registered profession in Germany, and the Erzgebirge is full of officially qualified Master Wooden Toymakers.

Manufacturers are also trying to modernize their products to attract interest among the younger generations. "Smoking men sitting at computers have been appearing on the shelves and I'm sure we'll have a smoking man listening to an Ipod soon," said Uhlmann.

One particularly topical product out this year, the "Economic Crisis Smoking Man," consists of a man drowning in a barrel of water.

And one Berlin Christmas market stall selling genuine Erzgebirge products this week featured a new type of smoking man in the shape of an Arab sheikh holding a pot of coffee spouting smoke.

"We're noticing more and more that people are buying the Chinese stuff," said the salesman. "You can't blame them with this economy. It is cheaper. But it's just not as good."

The Erzgebirge woodcraft tradition dates back to the 17th century when farmers and miners working in the region's silver, tin, bismuth and cobalt mines supplemented their income by making wooden toys and tools. As the mines gradually closed, the sideline became more important, and the 19th century saw the move towards seasonal ornaments like the nutcracker, smoking man, pyramid and carved angels and choirboys.

Christmas is obviously the peak sales people but many businesses work all year round building up their stocks and designing new products, said Uhlmann. "Foreign tourists coming to Germany are a big customer group because they buy these products all year round. Unfortunately, the crisis has kept many tourists away this year," he said.

The industry had no trouble surviving East Germany's communist rule even though the authorities frowned on religion and religious symbols to such an extent that they referred to the Erzgebirge Christmas angels as "winged year-end figures." But the products were a valuable source of hard currency, and virtually the entire Erzgebirge output was exported to West Germany.

Uhlmann declined to give a forecast for business this year but said profits in the sector were generally under pressure from rising costs and falling sales. Chinese imports are here to stay, he said. "There's no point fighting things that can't be fought. We've just got to raise our profile and highlight our strengths." 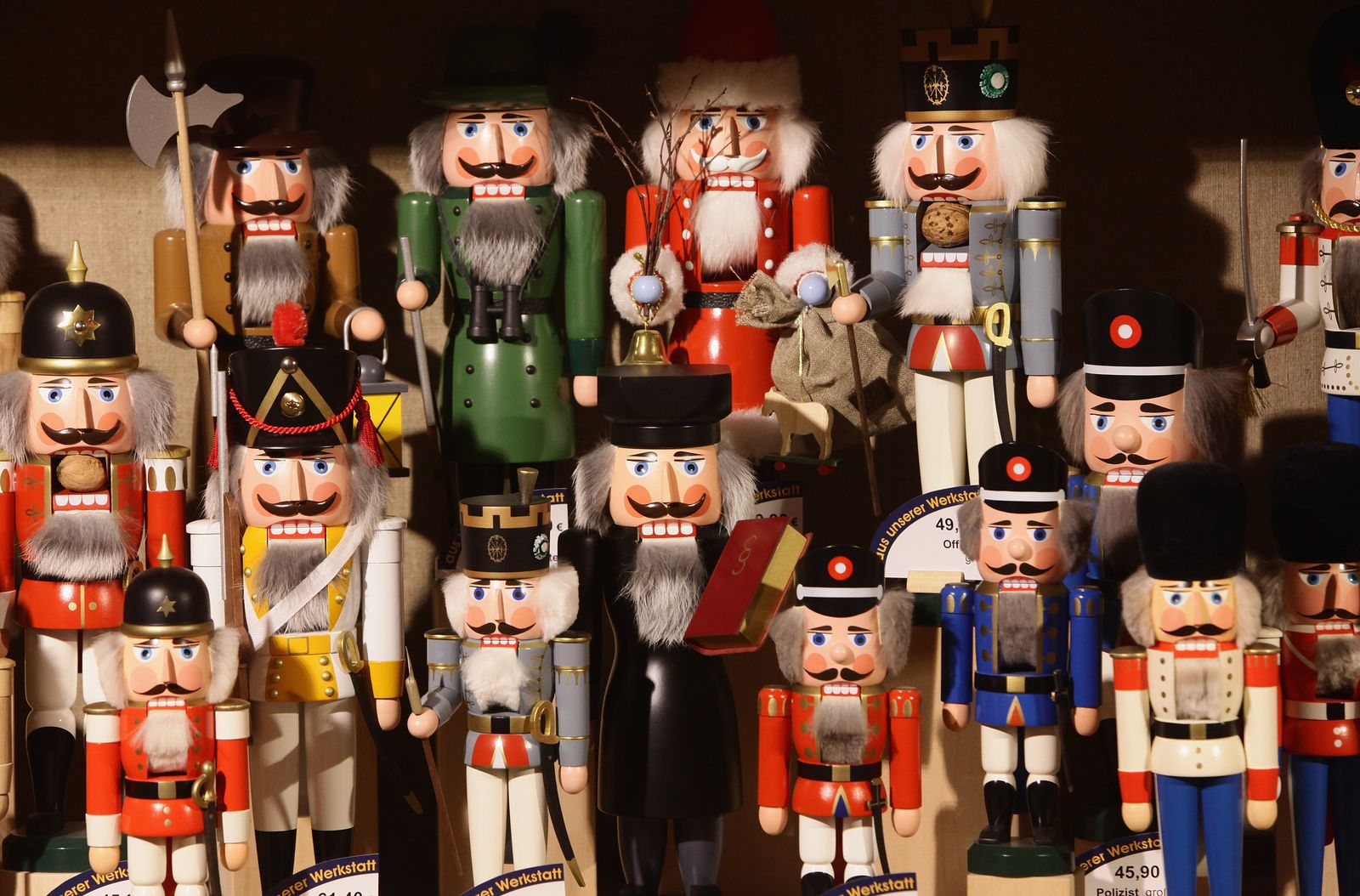 Under threat -- German-made nutcrackers at a factory in the eastern village of Seiffen, where many of the crafts are made.

The German nutcracker -- the bearded, wood-carved soldier who stands to attention in households around the world at Christmas ready to bite the shells off walnuts -- faces growing competition from cheap Chinese copies that are threatening eastern Germany's centuries-old woodcraft tradition, the industry's leader has warned. 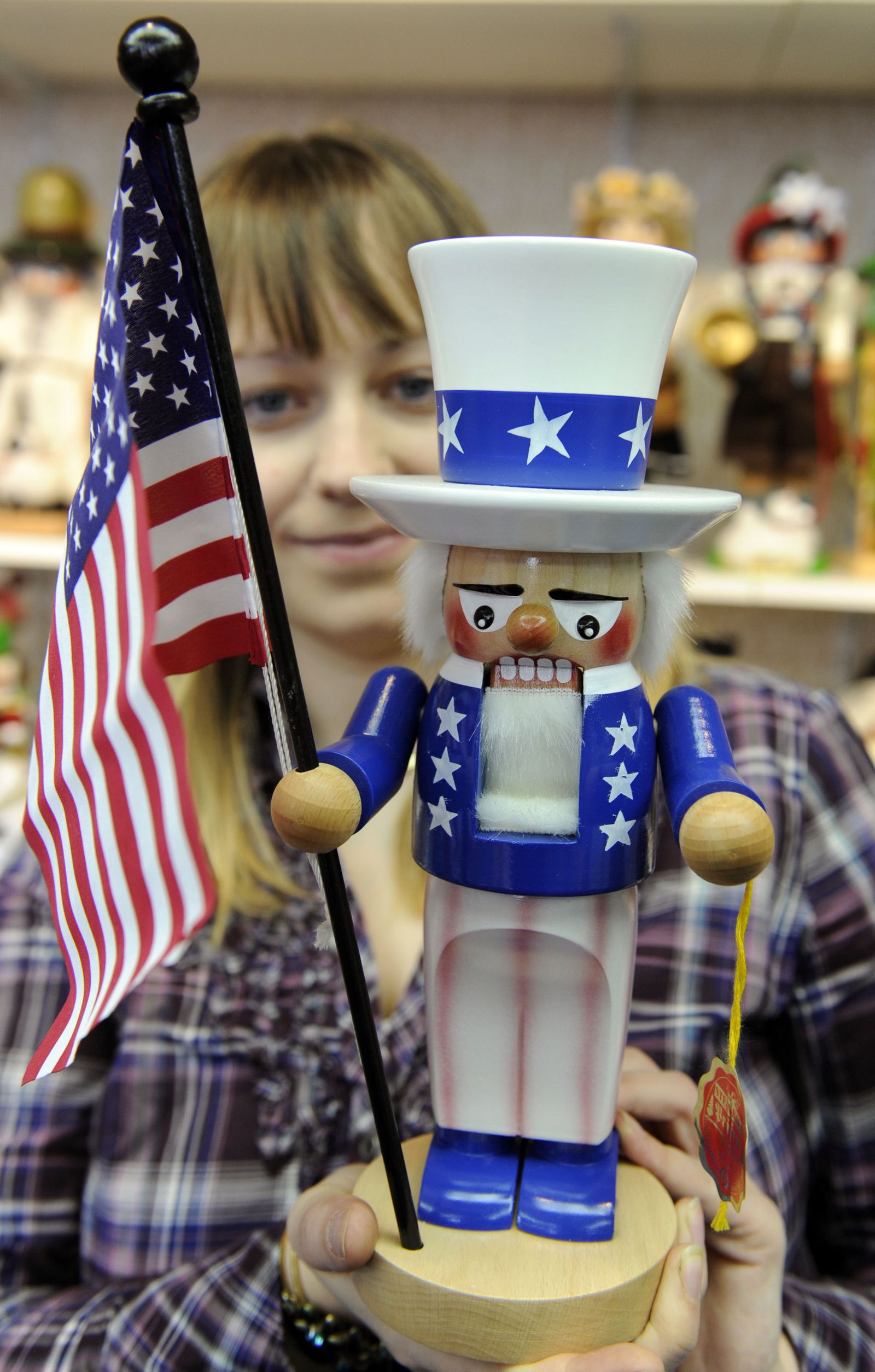 An "Uncle Sam" nutcracker made by Steinbach, one of around 300 wood-carving businesses in the Erzgebirge region. The US is the biggest foreign market for Erzgebirge products, but sales there have been hit by the economic crisis and the strength of the euro.