The tallest flat screen display in modern-day seafaring will tower to a height of 17 meters stretching for seven floors from top-to-bottom, all visible to passengers from glass elevators as they travel between decks. The mega-display will often show travelers exactly what they can see out the windows or from the deck: The natural beauty of the Arctic and the Antarctic.

The Norwegian cruise line Hurtigruten has focused its efforts on well-educated, environmentally aware explorers who are interested in the polar regions. And the company's new flagship, an explorer cruise ship with an ice-strengthened hull and room for over 500 passengers, is designed to take the next step toward the goal of sustainable ocean cruises. Its most significant technical innovation isn't the giant screen. Rather, it is the vast collection of battery packs shelved in two dark stowage areas below deck.

When the Roald Amundsen launches on June 27, it will become the first hybrid-powered cruise ship in the world, propelled by both electric motors and internal combustion engines -- not unlike the Toyota Prius and other such automobiles. The technology is designed to make the ship more fuel efficient, with Hurtigruten claiming it will cut fuel consumption by 20 percent.

"We are the greenest cruise company in the world," says Hurtigruten spokesman Rune Thomas Ege, though he quickly adds that he isn't actually fond of the term "cruise line." The company opened its doors in the late 19th century as a postal ship line and still reserves cabins on its coastal routes for public transportation services, with help from Norwegian government subsidies.

Within the growing market, which Hurtigruten calls "Explorer Voyages," the Norwegian line has become the global leader. Instead of dance clubs and ropes courses, there are lecture halls onboard where scholars inform guests of the severe challenges facing the ecosystems that the naturalist cruise-ship passengers are carefully traversing.

The ships carry no plastic cups, but they are full of environmentally correct advice. If passengers determine that they can do without having their cabin cleaned, they can hang a card on their door handle reading "Green Stay." It saves on detergent, energy and money, which Hurtigruten then donates to a good cause.

"We are part of a very polluting industry," says Ege. "But we are the only ones to welcome stricter emission rules." The example he points to is heavy fuel oil, which releases sulfur gases and other contaminants. Hurtigruten hasn't used the fuel for the last 10 years, even in places where it is permitted. Ege says that the line uses expensive marine diesel instead, resulting in annual extra costs of 15 million euros per year.

While that may be exemplary, the Norwegian company isn't the only cruise line that has committed itself to improving sustainability. Carnival, one of the largest cruise ship corporations in the world, has already gone even further with the 2018 launching of the AIDAnova, the first cruise ship powered by liquified natural gas. Ten additional such ships are to follow by 2025.

Methane, the primary component of natural gas, is the most climate friendly of all fossil fuels because it contains much less carbon than crude oil, out of which gasoline and diesel is made. The result is a much lower level of harmful emissions when it is burned. Even without catalytic converters and filters, the amount of carbon particulate matter and nitrogen oxide produced by natural gas-powered ships is hardly measurable. And there is no sulfur at all.

But these ships are expensive. Carnival executive Jens Kohlmann estimates that an additional 25 million euros are added to construction costs, amounting to roughly 3 percent of the price of a new cruise ship. "Most of the additional costs come from the tank," he says. The gigantic methane containers, where the fuel is kept cold and liquid, takes up far more space than a diesel tank containing the same amount of energy.

Kohlmann is responsible for testing and introducing modern propulsion technologies at Carnival Maritime. The Costa Concordia disaster off Giglio Island in January 2012 was a low point for the company and focusing on more sustainable technologies offered an opportunity to establish a new identity. The disposal of the wreck turned into an environmental operation of almost bizarre thoroughness. It ended up costing fully 1.5 billion euros, around three times the cost of replacing the sunken vessel.

Kohlmann has been allocating a growing budget to green technologies. Among the research projects was the use of waste heat from the cooling and exhaust systems to save energy. Here, too, says Kohlmann, natural gas and marine diesel, which is largely free of sulfur, are useful. "Clean fuels make it possible to further cool exhaust without corrosive damage," he says.

Kohlmann is also interested in the hybrid technology that Hurtigruten has now introduced. He hopes that within three years, a Carnival ship will be outfitted with the system for testing purposes. Nevertheless, he is skeptical of Hurtigruten's claim of 20 percent greater fuel efficiency. "A ship doesn't drive like a car," he says. Generating energy through braking, a key element of hybrid systems in automobiles, isn't an option at sea, he points out.

The engineers from Hurtigruten hope that the greatest savings will come through "peak shaving." Ships often need a sudden surge of energy -- while maneuvering, for example, or when energy-intensive systems are switched on. In such instances, conventional ships have to start an additional motor or generator, only to turn it off again a short time later. The process drives up fuel consumption in addition to wear and tear.

The compensatory power from the battery packs can eliminate the need to switch motors on and off. Even in ports that have no or insufficient power supplies, the onboard batteries will be able to provide the ship with emissions- and noise-free energy overnight. Hurtigruten plans to call the mode "Silent Night."

But during the loud days and nights on the high seas, at times when the ship is continually motoring along, the E-propulsion system won't have much to do and won't be able to move the ship forward on its own. The Roald Amundsen will be able to store 1.2 megawatt hours of energy, with the battery stowage areas large enough to accommodate five times that amount. But even then, it wouldn't even be enough to propel the ship 50 kilometers.

A 100-percent electric cruise ship is an illusion. As such, Hurtigruten is focusing its efforts on natural gas and already has plans to retrofit six ships with a methane hybrid propulsion at a cost of 800 million euros. To make room for the larger tanks, the company is planning to eliminate automobile storage space, which comes with its own environmental benefits.

The company is also looking into replacing fossil fuels altogether. Methane, after all, can be relatively easily produced from biomass and organic waste. In mid-May, Hurtigruten announced the signing of a contract with the Norwegian biogas producer Biokraft. In the future, a share of its fuel needs will come from synthetic natural gas made from fish waste and other organic residuals. "Our ships will literally be powered by nature," says Hurtigruten CEO Daniel Skjeldam.

Still, only that part of the Hurtigruten fleet that serves the traditional coastal routes will use the biogas. Natural gas-powered ships require fueling stations that can pump liquified natural gas, and that infrastructure is only now being slowly established in Europe. Trips to Antarctica of the kind the Roald Amundsen will make cannot yet be made with natural-gas propulsion.

Which means the flagship of the Hurtigruten fleet will continue to burn diesel -- once it is launched, that is. Delivery of the hybrid cruise ship from the Kleven shipyard will come one year late, if all goes well. Booked cruises have already been cancelled and tickets refunded. Making matters worse, Hurtigruten can't even claim damages from the delayed delivery since it owns the shipyard itself.

"The timeline was very ambitious," says Kleven CEO Olav Nakken. More than anything, the company in the small town of Ulsteinvik near Alesund was a bit out of practice. For more than a decade, it has focused primarily on building specialty vessels -- for example those used to support oil platforms. Mastering the complexities of a modern passenger ship is a significant challenge.

And by the standards of Hurtigruten, the Roald Amundsen is quite sumptuous. It may not have all the amenities of the gigantic floating resort hotels run by other lines, but it does include luxury suites with their own whirlpool baths.

Part of the Problem

An almost identical sister ship, named after the Arctic explorer Fridtjof Nansen, is already under construction and launch is planned for next year. Kai Albrigtsen of Hurtigruten proudly and expertly leads us on a tour through the incomplete ship. By the time it is finished, fully 700 kilometers of cable will have been laid. It also includes a crane system that can lower dinghies wherever passengers might want to take a closer look at the nature the Arctic and Antarctic has on offer. The fleet of tenders is slightly reminiscent of the squadron of rubber dinghies used by Greenpeace -- and Albrigtsen says they are sometimes used for similar purposes. He says that previous trips have seen passengers spend hours picking up plastic waste from the beaches.

The 55-year-old has had an extraordinary career at Hurtigruten. He first joined the company in 1980 to help out in the kitchen. This year, though, he will take the helm of the Roald Amundsen as captain. Open and friendly, he is happy to answer all questions posed to him, including the more sensitive ones.

Such as: How much fuel does a ship like this use?

On average, the captain says, it burns 86 liters of marine diesel per nautical mile. That translates to around 4,600 liters per 100 kilometers, or around 9 liters per passenger at full occupancy. In other words: No matter how much plastic the environmentally friendly tourists might collect as they sail through the melting polar paradises, they still must confront the fact that they are actually part of the problem. 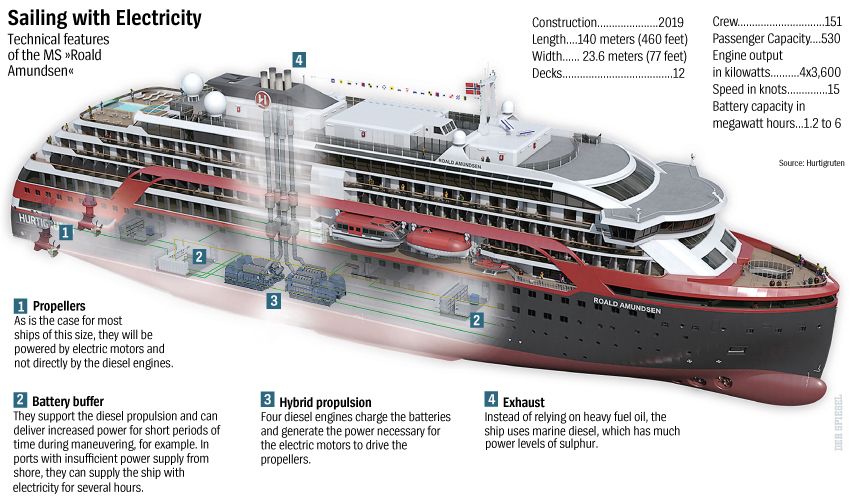