At ten in the morning, anticipation was running high. "Knut come out! Knut come out!", a group of children chanted impatiently.

Hundreds of Knut fans had made their way to Berlin Zoo on Friday morning to witness the polar bear cub's first public appearance. Children, journalists and normal zoo visitors alike were gripped by excitement as Berlin's favourite bear finally emerged in the outdoor bear enclosure.

Gabriel called Knut a political symbol in the climate change debate: "Hardly any animal symbolizes the consequences of climate change as clearly as the polar bear," he said. "No ice, no polar bear."

Gabriel, who has recently became Knut's "godfather," said that the little cub would be the mascot of the United Nations' Convention on Biological Diversity conference in Bonn in May 2008. 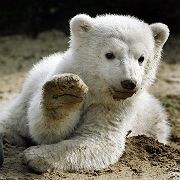 Cute Knut on Friday greeted the world which has been eagerly awaiting his first public appearance.

Despite the hordes of visitors, photographers, and camera crews, Knut the polar bear showed some real cool. Unfazed by all the attention, he leisurely explored the outside enclosure, running across the grass area, climbing up the rocks and dipping his paws into the water.

He also openly showed his affection for Thomas Dörflein. Just like a son with his father, Knut followed his carer around everywhere he went. Every now and then the two smooched or cuddled up together. Knut, who was born in December, has been raised on a bottle by Dörflein after the cub was rejected by his mother Tosca.

The close relationship between the two had been subject to criticism from animal rights activists, who claimed that Knut was being too "human," but that negative attitude seemed to have evaporated on Friday morning.

"Knut is incredibly cute," nine-year-old Christopher told SPIEGEL ONLINE, "I particularly like his white fur because it's so fluffy." His friend Selen, also aged nine, agreed and added: "But his face is really cute, too!" Selen was so taken by Knut that she even bought one of the Knut teddy bears which were on sale at the zoo.

But will they still love cute Knut as much when he's older? "To be honest, I don't think so," Selen said, "but I'll forever remember him for the way he is now."

The children also had ideas about how to stop Knut from becoming too human: the zoo should teach him some real animal behaviour.

Nine year-old Pascal suggested filling the outdoor lake with fish so Knut can hunt them, just like in the wild. Anton, 10, had an ever better idea. "They should throw chicken into the enclosure," he said, adding "but not raw chicken, cooked chicken."

One who knows Knut's tastes and preferences well is Berlin Zoo veterinarian Andreas Ochs. He described the famous polar bear as being extraordinarily easy to care for: "Knut accepted the bottle from the very beginning on, which is highly unusual," he told SPIEGEL ONLINE.

Little Knut does have the occasional temper tantrum, though. "Knut can get very angry, for example when he's hungry and his bottle is blocked. He'll start screaming and biting those around him," Ochs explained. "After all, Knut is not a teddy bear -- he is a polar bear."