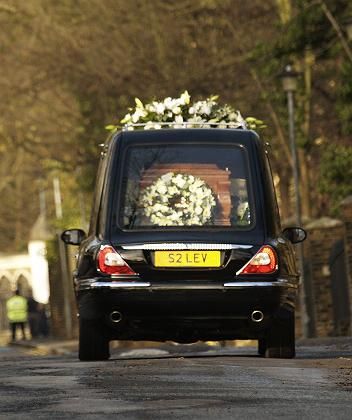 Coming soon to a television near you.

Cooking shows are a dime a dozen on television these days. Home improvement shows hit the big time in the 1990s. Property shows are huge in Britain. Relationships and weddings have likewise become popular prime-time fodder. But the one event that faces every human on Earth has never had its own television channel.

Starting this autumn in Germany, EosTV -- a 24-hour-a-day, seven-days-a-week television channel devoted exclusively to aging, dying and mourning -- will hit the airwaves. Viewers will be served up documentaries about cemeteries, shows about changing funeral culture, and helpful tips about finding a retirement home or nursing care. Should you be looking to install a stair lift in your home, EosTV will be the place to find information about that too. Death and dying, in other words, right in your living room.

"Over 800,000 people died in Germany last year," Wolf Tilmann Schneider, the channel's founder, told SPIEGEL ONLINE. "Multiply that by four and you have the rough number of people directly affected by those deaths. There are also 2.1 million people in Germany needing care in their old age. There are millions of people confronting the issues of getting older and dying."

The show pairs television veteran Schneider with Germany's funeral home association and seeks to take advantage of the country's changing demographics. In 2006, Germany saw almost 150,000 more deaths than births, a continuation of a trend that has seen the country's population age dramatically in recent decades.

In addition, says Kerstin Gernig, spokeswoman for the National Association of Funeral Homes, there has also been a recent shift in the way people approach death and burial. More people are taking advantage of anonymous burials, for example. Forest cemeteries are likewise becoming more popular, as are Internet graveyards. And the church no longer plays such a large role in the death industry.

"We want to take a look at the changing nature of mourning and death in the Internet, pictures and movies," Gernig told SPIEGEL ONLINE in reference to the new death channel.

The channel, which will cost less than €10 million to launch, would also like to be a part of that trend. For years, Germany's funeral homes have noted a rise in the number of elderly people and their descendents looking to work with professional writers to document their lives and those of loved ones.

Working with the funeral home association -- which represents some 85 percent of German undertakers -- Schneider is hoping to provide families a video outlet for their mourning as well. Families can buy 30 second slots to create televised obituaries. For a €2,400 fee, the spot will be aired 10 times on the death channel and will also be provided as video on the company's Web site and those of funeral homes.

"We are all the same. We all have the same life cycle and we all live and die," says Schneider. "That's where the idea came from that -- just like an obituary one places with a newspaper -- I wanted to give people the opportunity to do that on television."

Most of the programming, however, will be taken up by informational shows for the elderly. Those moving into their later years can watch the channel to inform themselves about life insurance, funeral insurance, home nursing services, and which companies are the best at installing stair lifts.

Program directors are even hoping to do shows on Germans' seeming unwillingness to donate their organs. The shows, Schneider hopes, will be sponsored by companies selling products to those entering their golden years.

And of course, there will be entertainment programming. Schneider can barely contain himself when he talks about his own interest in cemeteries. "I realized recently," he says breathlessly, "that I really like going to the cemetery. And I've noticed that in Germany and in Europe people go to cemeteries not just to mourn, but also to enjoy the peace."

His idea? Documentaries on European cemeteries. What happens to bodies in Germany after their allotted cemetery time -- as a rule, dead Germans stay in the ground for no longer than a generation -- has expired? What about that beautiful graveyard in Paris? And then there's the cemetery in Berlin that was divided by the Berlin Wall. The list of potential topics, so says Schneider, is endless.

So too, he is hoping, is the target group. After all, he points out, hundreds of thousands of people die in Germany each year. And it's not just a German phenomenon. Indeed, before the first show has even been broadcast, EosTV -- named for Eos, the Greek goddess of the dawn -- is already planning to expand.

Schneider has begun the search for partners across Europe and in the United States. The response, he reports, has been quite lively.