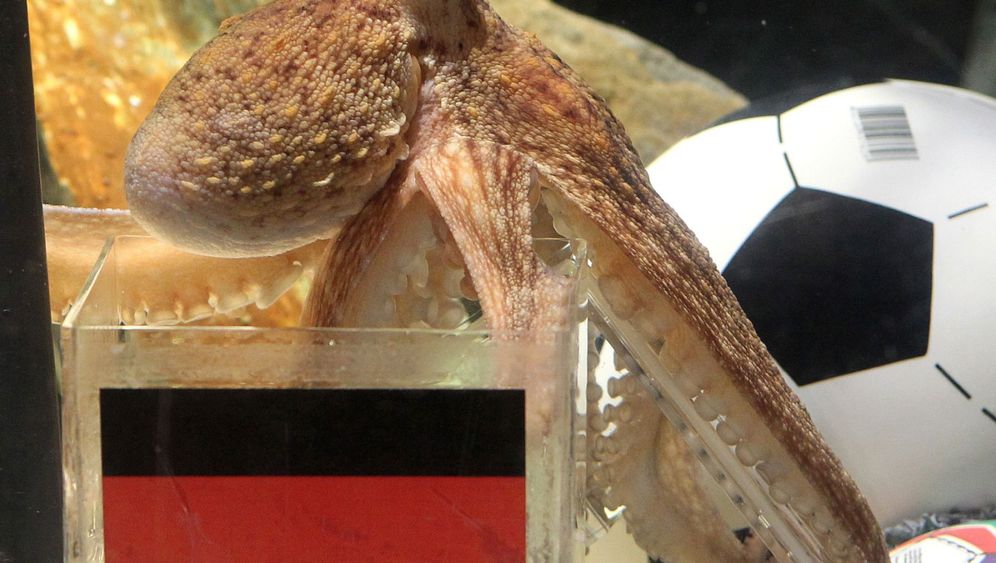 Paul the Octopus, who gained worldwide fame this year by correctly forecasting the outcome of eight World Cup soccer matches including the final, has died peacefully of natural causes, the Sea Life Aquarium in Oberhausen said on Tuesday.

"Management and staff of the Oberhausen Sea Life Aquarium were devastated when Paul was found dead this morning," the aquarium said in a statement.

It said it would erect a memorial to the little brown octopus whose astounding predictive powers turned him into the true star of the tournament, eclipsing the likes of Lionel Messi, Wayne Rooney, Thomas Müller and Andres Iniesta. Spain, which won the tournament, embraced "Pulpo Paul" as a hero.

During the World Cup in South Africa in June and July, TV channels around the world provided live coverage of Paul's forecasts, made by picking a tasty mussel from one of two transparent boxes emblazoned with the national flags of the two opposing teams.

There was a one in 256 chance that he would get all eight predictions right. Paul's success rate confounded mathematicians, angered bookmakers and spooked hundreds of millions of football fans around the world.

'He Died Peacefully of Natural Causes'

"Paul delighted people from all continents with his seven consecutive correct predictions for the matches of the German national team and for the final," said the aquarium's general manager, Stefan Porwoll. "He was dear to all our hearts and we will sorely miss him. He died peacefully in the night of natural causes. It is a comforting thought that he had a good life with us with the best possible care delivered by a committed team."

Some Germans, disappointed by Paul's unfavorable predictions towards their own national team, had joked that they wanted to fry him up as calamari. Sea Life officials on Tuesday that Paul's remains are currently being stored in a freezer and that he would be cremated in the coming days.

"In honor of Paul and in view of the worldwide interest, a memorial will be put up to him in our exhibition," said the aquarium, which is clearly adept at milking his fame. "We will show his most beautiful and moving moments on a screen. And we will also display the presents we received from all over the world, along with the two glass boxes. We will also show Paul's urn."

The fame of the creature variously dubbed "Psychic Paul," "El Pulpo Paul" and "Paul le Poulpe" grew with every correct forecast. When Spain won the final, ecstatic fans in Madrid were seen waving octopus banners. The small town of Carballino in northern Spain offered a €30,000 "transfer fee" because it wants to make Paul a mascot of its food festival, a disturbing notion.

In the nations whose teams were knocked out of the tournament early on, Paul's predictions added a little much-needed tension to matches they no longer had a stake in. "He was right again!" was a common post-match exclamation in bars and newspaper headlines around the world. Paul even provided England fans with some desperately needed pride because he is believed to have been born in the southern English town of Weymouth in early 2008, before he moved to Oberhausen.

But Paul's uncanny accuracy wasn't the only reason for his fame. The lack of excitement in many of the matches also played a part. Every World Cup needs its heroes, and South Africa 2010 came up short in this respect. Many of the stars that had been predicted to dominate the tournament, such as Rooney and Messi, failed to shine.

Germany sparkled with two stunning victories over England and Argentina, but those matches were the exception in a string of clashes marred by poor and unimaginative passing, some appalling referee errors and, in the case of Sunday's final, by relentless fouling. Not to mention the drone of Vuvuzelas.

So Paul offered a welcome distraction. His success rate enabled him to brush aside competition from other animals chosen to rival his predictive powers during the tournament, for example a chimpanzee called "Pino" in an Estonian zoo, a parakeet called Mani in Singapore, or a crocodile called Harry in Australia.

Attempts to find a scientific explanation for Paul's choices have come to nothing. A Russian biologist, Vyacheslav Bisikov, suggested that he might have been attracted to boxes that displayed flags made up of stripes. But that doesn't explain how he distinguished between two boxes with striped flags, such as Spain and the Netherlands. Besides, octopuses are believed to be color blind, which precludes the explanation that he picked the brightest flags.

Germany's leading octopus researcher, Volker Miske, said Paul may have been making his choices based on the size of the mussel in the box, or the ease with which the box could be opened, or traces of mussel flavor on the outside of the box. It is clear, however, that Paul was highly intelligent. Apart from being a soothsayer, he was an expert at unscrewing the lids off jars.

Before the World Cup, Paul's powers were already known in Germany because he had correctly predicted four out of Germany's five matches in the 2008 European Championship. But his clean sheet this year has made him immortal.

He helped to make the World Cup memorable. Just like everyone will remember the 2006 tournament in Germany for Zinedine Zidane's astounding head butt, and the 1986 one in Mexico for Maradona's "Hand of God" goal against England, South Africa will forever be associated with an octopus.

If he really was born in 2008, then Paul was nearing the end of his natural life. Octopuses only live three years on average and he was never going to be around for the next European Championship in 2012, let alone the World Cup in Brazil in 2014.

But here is some comfort for football fans. "Behind the scenes, a young Paul is already acclimatizing himself, he was meant to be trained by Paul the First in the coming weeks," aquarium officials said.

Fellow sea creatures will also benefit from his immortality in future. Oberhausen said it plans to donate some of its income from the sale of commercial rights relating to Paul -- he adorns a clothes brand and adverts for a supermarket chain, for example -- to help finance a rescue station for endangered turtles on the Greek island of Zakynthos.