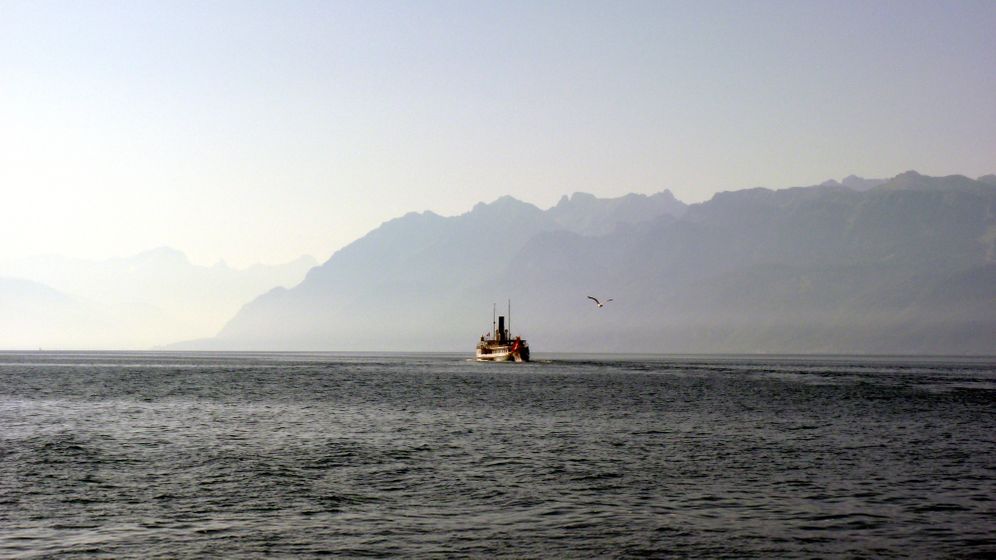 For a moment, the image looks familiar, like something from a television documentary or movie. But slowly it begins to feel different, more real. Suddenly, in the beam of the 1,200-watt spotlight, the steering wheel of a steamship that sank over a century ago emerges from the emerald darkness. At first, only rough outlines are visible through the thick Plexiglas porthole. But slowly the vessel comes into focus.

"The bottom sediment that's been kicked up has to settle back down first," says Nikolai Pietko. A blizzard of suspended particles floats through the cone of light as we glide over the wreck of the paddle steamer Rhone. Since a stormy night in Nov. 1883, the ship has been lying here on the bottom of Lake Geneva, in eternal darkness.

Pietko is the captain of the Mir 2, a submersible research vessel owned by the Russian Academy of Sciences. At the moment, the vessel is helping researchers explore the hidden depths of Switzerland's largest body of water. After launching from a floating platform, we are making our descent at 40 meters (131 feet) per minute with Pietko at the controls. With a sure hand on a joystick, he maneuvers the battery-operated vehicle like some kind of underwater helicopter, his eyes focused on the compass. Since GPS signals can't penetrate the waters to such depths, he has to rely on his nautical abilities.

Mir 2 and its twin, Mir 1, already have a number of other spectacular missions behind them, including dives beneath the ice of the North Pole and in the depths of Siberia's Lake Baikal. For this mission, the submarines took a 1,500-kilometer (932-mile) journey over land from the Baltic Sea port of Kaliningrad to Lake Geneva. They are currently being used on a project known as "elemo" ("explorations des eaux lémaniques," or "exploration of the water of Lake Geneva"), coordinated by scientists at the École Polytechnique Fédérale de Lausanne (EPFL).

Exploring the Mysteries of Lake Geneva

Today's dive takes us to the wreckage of the Rhone, which sank after a head-on collision with another ship, killing 14. What's left of that ill-fated night can be found between Lausanne, on the Swiss side of the lake, and Evian, on the French side, almost right at the deepest point of the lake. On the sonar display, the ship's remains create a landscape of yellow, blue and pink pixels. At around 300 meters, the water is a still-warm 5 degrees Celsius (41 degrees Fahrenheit).

The two identical Russian submersibles will be used to explore the lake until mid-August as part of more than a dozen individual research projects. These projects are primarily focused on basic research, and the investigation of the shipwreck is only a small part of why they are here. Indeed, even today, comparatively little is known about the 580-square-kilometer (224-square-mile) floor of Lake Geneva.

About a dozen international teams of scientists now want to change that. One task includes analyzing the pollution particles in the lake whose small size allows them to slip through the filters of the waste water treatment plants on the shoreline. What happens with these so-called "micro pollutants" -- including heavy metals and residuals from medications and cosmetics -- is important because, each day, the lake provides drinking water to more than half a million people. Scientists estimated that the waterworks pump some 80 million cubic meters (21 billion gallons) of water out of the huge reservoir each year. "The number is continuously rising," says the EPFL's Ulrich Lemmin, who is coordinating the scientific program for the submarines. "Lake Geneva is a very attractive area."

Measuring the amount of pollutants in the water is meant to help scientists better understand ecological processes within the lake. But the scientists aren't just collecting the data; they can also closely inspect it in the submarines and have the pilots steer them to places in the lake that provide excellent observation points. As Lemmin explains, it is very difficult to reach such places with smaller submersibles. Diving robots would simply carry out their assigned tasks, but the Russian submarines allow the scientists to conduct their measurements flexibly and alter them whenever necessary.

The project is being funded by Frederick Paulsen, CEO of Ferring Pharmaceuticals. His company's headquarters are located in the small town of Saint-Prex, right near the lake. The company's product line includes hormone medications -- in other words, some of the substances contributing to the water pollution that the scientists hope to analyze. Paulsen's other activities include being honorary consul for Russia in Lausanne, a position which has already helped him attract the Moscow-based Bolshoi Ballet to Switzerland. He is also familiar with and a fan of the submersibles and was one of the main sponsors of the Russian mission to the ocean floor beneath the North Pole in August 2007.

The adventurous executive was naturally on one of the submarines during that mission, and he has also accompanied one of the dives in Lake Geneva. It's difficult to determine exactly how much Paulsen is spending to nurture Russian-Swiss relations with the "elemo" project. But it is known that he is also paying the travel and accommodation expenses of the scientists involved in the project. And they're quite happy to be able to use the submarines.

Dangerous Canyons in the Depths

Mir 1 and Mir 2 are also supposed to explore the canyons of the Rhone River, which are probably the lake's biggest secrets. The river's waters flow into the lake on its northeastern side. Since it is cold and full of sediments from the Alps, it sinks to the bottom of the lake. After a journey that takes an average of almost 11 years, the waters flow back out of the lake at Geneva, at the southwestern corner of the lake, before continuing their journey to the Mediterranean.

Each year, the Rhone dumps five metric tons of sediment into the lake. As that sediment piles up at the bottom of the lake, it creates a mysterious underwater landscape. Though observers cannot see them from land, the bottom of the lake is full of gulches that can stretch for kilometres and be up to 50 meters deep. The walls of this spectacular labyrinth are believed to be extremely fragile. Indeed, the collapse of one of the walls is believed to have triggered a tsunami on the lake in 563. Legend has it that a wall of water raced across the lake then and destroyed the bridges of Geneva. Plans now call for the two Mir submarines to squeeze their way through these canyons.

The vessels, which are painted orange and white and weigh 18 metric tons each, are among the best submarines available in the world for deep-sea research. They were built in Finland in the 1980s for the USSR Academy of Sciences. There are only four other submarines of this type in the world that can reach depths of more than 3,000 meters (9,843 feet). Indeed, the shallow waters of Lake Geneva make it almost a walk in the park for the submarine pilots -- at least when it comes to depths.

Pietko smirks and enjoys a bit of tea from a plastic cup during a brief pause on the bottom of the lake. He says that he has gone on dives deeper than 5,000 meters, that he has visited the wreckage of the Titanic and seen so-called "black smokers," hydrothermal vents emitting clouds of black material found in the deepest parts of the ocean.

Though he has not grown bored of his job, the 54-year-old Moldova native will say that he's enjoying the relatively relaxed atmosphere of his current assignment. "We normally work 15, 16 hours long," he says. "It's easier here in the lake."

Our journey to the bottom of the lake and back takes about two and a half hours, including the time it takes to visit the wreckage of the Rhone. Though exciting, it's hard to imagine wanting to stay in the submarine for long. As the lake's water cools its hull, condensation starts to build up and run down its interior walls. Pietko is constantly having to wipe it up with a cloth. Likewise, the humidity hovers at around 95 percent. And, of course, things can get very tight inside with all the switches, cables and monitors.

The hull of the submarine is four centimeters (1.6 inches) thick and made out of tons of a special type of steel that is as necessary as it is bulky. Indeed, the hull must be able to withstand monstrous amounts of pressure. In Lake Geneva alone, the water pressure in the depths can reach roughly 30 times what is on the surface.

The two-meter-long (6.6-foot-long) "personnel sphere" can barely hold three people. Although Pietko is lanky, the lack of space doesn't seem to bother him too much. But it can take a lot of effort for long-legged passengers to get comfortable on the blue cushions of the submersible.

"Base. This is Mir 2," Pietko says into the radio. The answer is loud and full of echoes: The return path is clear. Pietko flips a switch to turn on one of the ballast water pumps. It starts to make a rhythmic noise as it starts. We are back on our way to the surface.