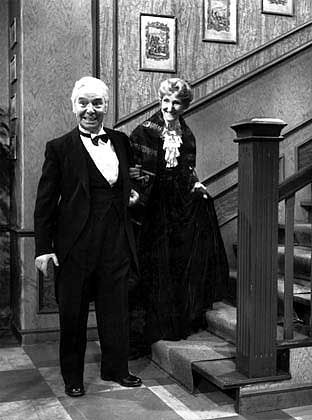 James and Miss Sophie in the cult New Year's classic "Dinner for One." Big in Germany, unknown in most of the rest of the world.

Most Germans love meeting people from other countries -- and, as a foreigner in Germany, the first few moments of a friendly encounter can feel less like a conversation and more like an interrogation. Once your hometown, average annual precipitation in said city, age and occupation are established in rapid-fire succession, though, it's time for the second tier of questions.

For English speaking visitors, the quiz goes as follows: Why are you Americans always shooting each other? How come so many people like Bush? Why do you English love the Queen so much? Can you explain Northern Ireland in 10 sentences or less?

Only after you've proven your reliability on the political front will Germans try to establish some common ground. And they're likely to start with what they view as an easy one: What do you think of "Dinner for One?"

"Dinner for who? you stammer.

You know -- dinner for one; James; Miss Sophie; same procedure as every year?" And then they break into an uncontrolled fit of the hysterical giggles.

The native English speaker is at this stage completely flummoxed -- what on earth is this crazy kraut going on about? Then between snickers and guffaws, your otherwise quite sober and serious new friend will start to explain the phenomenon. Every New Years Eve everybody -- yes really EVERYBODY -- in Germany watches a black and white short film, in English, about an aristocratic lady and her butler. And they are astonished that you have never heard of it. Given its astounding popularity in Germany, they assume that it must be a huge hit elsewhere in the world -- and they feel flattered to have been lucky enough to get in on the big British joke.

The Same Procedure as Every Year

It's a terrible blow to the average German's weltanschauung when they find out that most Americans, Brits, Irishmen, Scots, South Africans, Canadians and New Zealanders haven't a clue what "Dinner for One" is all about. Only the Australians, it seems, have been introduced to the pleasures of this particular bit of black-and-white television buffoonery.

So what exactly is Dinner for One and why does it have such a hold on the German imagination? The story is pretty basic. Miss Sophie is a dotty old lady celebrating her 90th birthday in what she likes to imagine is the presence of her old pals. The dinner guests, though, are all long dead so her obliging butler James fills in for each of them. Not only does he mimic their voices, but he also drinks each of their toasts in turn, getting steadily more smashed as the evening -- condensed to a little more than 10 minutes in the skit -- proceeds.

James, played by Freddie Frinton, is hardly the stiff-upper-lipped butler one might expect. Rather, he's a bit of an old codger and cavorts across the screen in convincing slapstick manner, increasingly slurring his words and fighting with a tendency to trip over a tiger skin rug. As each course -- and round of drinks -- commences, the butler queries: The same procedure as last year, Miss Sophie? To which the rejoinder is (as night follows day): The same procedure as EVERY year James."

Indeed, the punch line of the whole skit -- and delicate readers may want to stop here -- is that when the old dear heads off to bed, the manservant pops the same question. And is met with the same -- this time, of course, quite saucy -- reply. And the German viewers erupt into convulsions of laughter even though they've seen it a million times before. The sketch, of course, improves from repeated viewing, not unlike the "Rocky Horror Picture Show." And on New Years Eve, of course, everyone is already a bit pickled making it easy for the millions of German viewers to recite the lines right along with the characters, giggling all the while.

What many people in Germany dont realize is that the film has never -- not once -- been shown in either the UK or the US, though it has had a few showings on Australian cable TV. Yet it is a huge hit, if not a national treasure, in Germany, and has also tickled the fancies of Austrians, Scandinavians and Estonians. The attraction? Perhaps the skit simply fits into a kind of prejudice about the English upper class as being daft, drunk and debauched. Or maybe it allows those with only rudimentary English skills to join in the fun of that famous British humor.

The two "stars" of the film, Freddie Frinton and May Warden, were British entertainers who had been performing this sketch at seaside resorts for years. It was written in the 1920s and Frinton bought the rights in the 1950s. During one performance in Brighton in 1963, the German TV presenter Peter Frankenfeld happened to be in the audience. He liked it so much he invited them to perform on his show. It was such a roaring success that the sketch was then performed in front of a live audience in Hamburg and recorded by the local station NDR -- and it is this version that is shown on German screens to this day.

The tradition of showing the skit on New Years Eve took off in 1972 and it is shown repeatedly across most of the channels available making it virtually impossible to avoid. In fact the show has the Guinness Record for the most aired TV program in history. The Dinner for One mania know no bounds: There are drinking games involving the various tipples imbibed; some fans even go so far as to cook the meal that Miss Sophie is served; there are trivia books dedicated to the theme; and even TV quizzes.

So next time you are chatting with a German friend and they ask you about Dinner for One, you can assure them you know all about it. Why not then turn the tables and ask them all about that great Austrian classic that has proved such a hit in the English-speaking world: "The Sound of Music?" It will then be your turn. "What? You haven't heard of it? Based on the true story of the Von Trapp family singers, singing nuns, Nazi postmen, dresses made out of curtains. Surely you know the baroness, Maria, and the captain ...? You can even launch into your favorite version of "Edelweiss." Take it from us, your new German friends will be absolutely horrified!