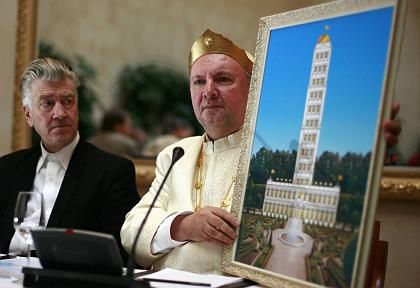 Arthouse director David Lynch and his guru Emanuel Schiffgens are in hot water over plans for a new "invincible university" that Lynch wants to build on Berlin's Teufelsberg.

A crowd of starry-eyed film students and meditation devotees filled an auditorium in Berlin Tuesday expecting to hear a lecture by David Lynch, the quirky but accomplished Hollywood director.

What they got, however, was a sales pitch for a New Age university that Lynch, the Oscar-nominated director of movies like "The Elephant Man" and "Mullholland Drive," wants to build on the Teufelsberg, Berlin's highest hilltop.

Lynch does not speak German and the man he chose to relay his vision, his German guru Emanuel Schiffgens, described the proposed university in terms sure to offend any German with any grasp of 20th century history.

Reaction from the audience was immediate -- and overwhelmingly negative. "That's what Hitler wanted!" shouted one man.

Schiffgens' response only made matters worse: "Yes, but unfortunately he didn't succeed."

Schiffgens might have been forgiven for his eccentricity -- he was wearing a flowing white robe and a gold crown, and described himself as the "raja" (king or prince) of Germany. But even in the peaceful context of Transcendental Meditation, an institution that promotes German "invincibility" is not likely to be welcomed in a nation where the horrors of Nazi rule are deeply ingrained in the collective consciousness.

Protests from the audience became loud enough that Lynch eventually approached the microphone himself. "I dont know what he (Schiffgens) said, but I think I understand that he used a word from the Third Reich, and let's just look at it this way, its a new world now," said Lynch.

Lynch is working to found a series of "invincible universities" across Europe. The institutions would integrate traditional courses in subjects like science and the humanities with the philosophy of Transcendental Meditation, a meditation technique pioneered in the 1950s by the Indian guru Maharishi Mahesh Yogi. Plans for such institutions are underway in Bulgaria, Estonia, Finland, and Scotland. The Scottish project is being co-sponsored by the 1960s folk music icon Donovan.

Teufelsberg (Devil's Mountain) is a hill in western Berlin made of rubble removed from the city after air raids in World War II. During the Cold War, the American military used it as an observation post to spy on East Germany with audio equipment. The David Lynch Foundation has entered an agreement with the city to purchase the property for an undisclosed sum, a transaction that should be completed by February of 2008.

In the wake of the flubbed presentation, the daily Berliner Zeitung reported Friday that Lynch's university is under attack from the Protestant church and local politicians.

But Lynch clearly believes in his plans. "Somehow tonight this beautiful gift has gotten perverted," he said at the forum. "Let's march boldly toward a bright and shining future."