It's just a simple iPhone application. But it has proven enough to trigger a raging debate in Italy. After all, the app happens to offer the full text of over 100 speeches by the country's Fascist dictator Benito Mussolini.

After having been released on Jan. 21, the application, known as iMussolini, has rocketed to the second-place spot -- behind a wallpaper application -- on the Italian version of iTunes.

"This is really a flabbergasting phenomenon," wrote one commentator Wednesday on the online version of the daily La Reppublica, "especially when you consider the fact that the iPhone has gained cult status for the Facebook and Web 2.0 generation. These aren't nostalgic old people and historians of the fascist era but kids and young adults that spend time and money on the Internet and get their information from it."

The application was created by Luigi Marino, a 25-year-old programmer from Naples. "It's a delicate page in our history that should never be forgotten," Marino told Bloomberg News, adding that he was "stunned by the success" of the application, which now gets more than 1,000 downloads a day at 79 euro cents ($1.11) a pop.

Marino is careful to point out that he did not intend for his creation to be used as a tool for glorifying Mussolini, who ruled as Italy's "Duce" (leader) from 1922 until his death in 1945. But, he adds: "It's not like you can't find the materials I used online, at the newsstand or in the library." To drive home the point, on Marino's advertisement for the application, he writes: "I would like to make it clear that this history-related application does not celebrate fascism."

But whatever Marino's intentions might have been, the application has taken on a life of its own. Users on the Web site Iphoneitalia.com, a blog dedicated to discussing related Apple products and applications, have written effusive comments such as "Sainthood now!" "Thanks for making an application on one of the greatest statesman in our history" and "Whoever doesn't like this application can always go live in China." Those that oppose the application respond with comments like "I'm going to puke," "This is just unadulterated masturbation for fascist egos" and "Are we insane? Collecting the speeches of a dictator who ruined Italy?"

Marino is not thrilled about such pro-Mussolini comments, many of which can also be found in the comments section attached to the application's iTunes store page. On his advertisement for the application, he asks "all users to avoid making inappropriate comments that glorify fascism and advocate crimes" and urges people to "avoid turning a history-related application into an opportunity for useless ideological clashes that are completely out of place."

He adds that he has asked Apple to remove such remarks from the comments page, but that it has yet to act. The Corriera della Sera newspaper notes that the Italian version of Apple's application store says that comments are blocked using an automatic keyword-identification system, adding that "obviously none of the words used on the iMussolini program are on the black list."

For now, though, Marino can be happy that he gets 70 percent of sales revenues. "In the meantime, I'd like to make some improvements to iMussolini suggested by users," Marino told La Repubblica, "and I'm thinking of making similar applications. But to avoid any scandals, perhaps they will be about people like Gandhi." 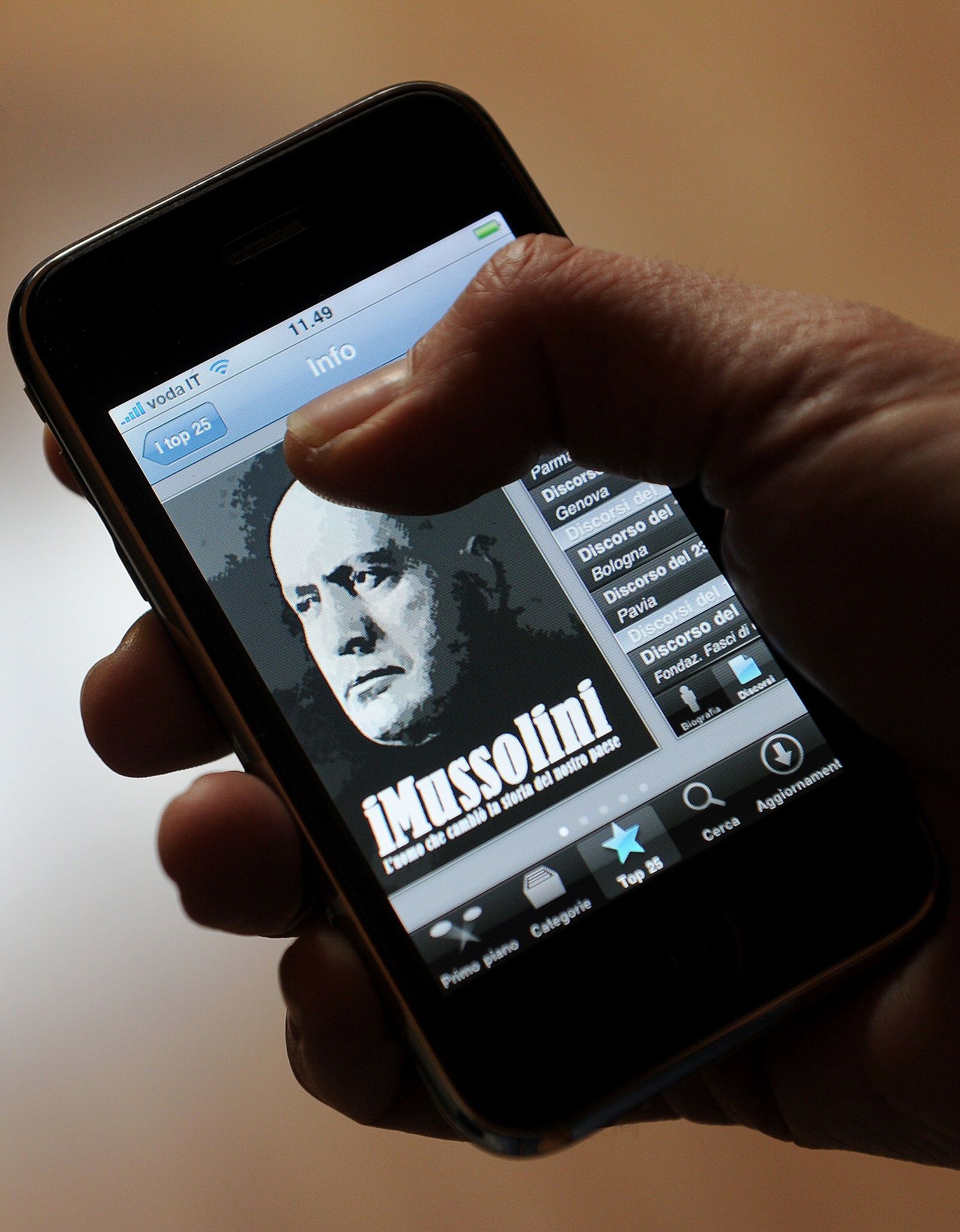 The iMussolini app has become a top seller in Italy.