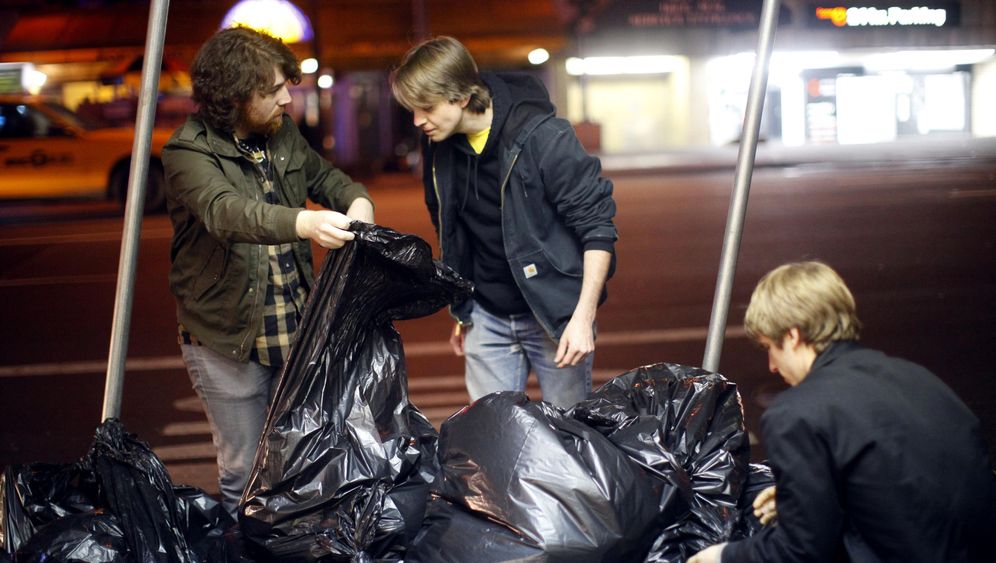 It's shortly after midnight on a Saturday in Mainz and a good time to swing by the local Rewe supermarket for a look.

Carring a backpack, Alex (whose name has been changed for the article), a 24-year-old biology student, is on his way to the store. The night is cold and the stars are shining.

Alex is a dumpster diver: Someone who doesn't walk through the front entrance to the supermarket, but whose patch of turf is out back where the trash cans are kept. Their hauls can include salad with wilted leaves, dried-out bread or cookies in damaged packages -- everything that shoppers inside the supermarket would no longer buy.

Alex has belonged to the German dumpster-diving scene for the past two years. Their numbers have continued to rise, especially in college towns like Mainz, Cologne and Hamburg. The food hunters comb through the trash bins of supermarkets nearly every night. Alex's hunts have become as regular as trips to the library over the course of his university studies. He knows the supermarkets like the local Edeka, Plus or Penny well, or rather their backyards.

Against the Throwaway Society

Is he hard up for cash? "No," says Alex. He earns money as a tutor, and his savings on groceries are only a positive side effect. Alex is someone with strong convictions: He "dives" to set an example in opposition to the throwaway society, the hasty disposal of staple food, and the "madness" that something perfectly useful lands so quickly in the garbage.

Tonight, Alex travels to a Rewe supermarket in a drab suburb that he knows well from earlier visits. The store is illuminated around the clock like a casino with a bright sign that promise big winnings. Alex still has to overcome a couple of obstacles in order to reach Rewe's trash containers because German supermarkets lock their garbage bins as they could be liable if anyone like Alex becomes sick from eating products put into the trash.

Alex runs by the main entrance, which is clad in advertisements for oranges and sparkling wine. He then reaches a black iron gate. It is adorned with gold-colored ornaments and protected with a security lock. Alex is relaxed and takes a quick look around. He knows that what he's about to do is legally considered burglary. Even so, dumpster divers who've been caught have gotten off lightly, despite the fact that they could theoretically receive jail sentences.

'It's a Little Like Digging Through a Treasure Chest'

Alex skillfully swings open the gate and slides along a concrete wall, careful not to set off the motion-detection alarm. In short time, he's standing before nine giant dumpsters. The smell of sweet decay, rotten vegetables, and rancid fat and meat penetrate the senses. Don't let the stench deceive you, Alex says. "Each container has something that's still good."

Alex takes off his backpack, puts on his leather gloves and illuminates the first trash bin with a flashlight. "I think tonight will be successful," he mumbles leaning headfirst into the black bin. The biology student fishes out two packs of cooked ham, four packs of dumpling dough, seven packs of spread and some chives. Then, he turns to the other trash bins.

"It's a little like digging through a treasure chest," he says and then he finds some red peppers, tomatoes, cauliflower, lettuce, oranges, melons, Camembert cheese and a plate of appetizers. That night's errand to the Rewe trash bins has lasted little longer than a half an hour, and Alex's haul has give him enough for his next meal.

He's a bit proud of his work. His backpack, which has a capacity of 60 liters, is full, and its zipper can barely close. The night's yield is just "OK," Alex says. "On really good nights, I can find even more, and the selection has more variety."

Dumpster diving has been popular for the past 15 years in the United States, where 40 to 50 percent of all edible food ends up in the trash, according to the Worldwatch Institute, a Washington-based environmental research organization.

The amount of edible food that lands in the trash bins of German supermarkets each year isn't statistically recorded. But an Austrian study indicates that a single supermarket throws away roughly 50 kilograms (110 pounds) of food a day. For activists like Alex, the reasons for such waste are specious at best. "We're throwing away food only because there are excessive expiration-date regulations while at the same time many people have nothing to eat," he says. "In our society, only the best will do."

Small blemishes, variations in weight, shape, color or an overdue expiration date transform edible food into waste. It is often too expensive for stores to fix damaged labels and packaging or too time consuming to clean dirty products. So an entire pallet of strawberry yogurt is tossed into the trash just because a container of buttermilk was spilled over it -- a stroke of luck for dumpster divers.

Pay for Groceries? 'I Don't Do That Anymore'

It's not known how many in Germany feed themselvs with dumpster diving, but entries on a number of blogs -- where divers share their experiences about certain supermarkets and their security systems -- suggest that there are thousands.

Word has spread that often flawless, even delicious, groceries land atop the garbage pile -- many fruits and vegetables, for example, are at the top of supermarkets' throw-away list because of their short expiration dates. For those reasons, dumpster diving has become part of everyday life for Alex and his acquaintances. "Almost everyone I know does it," he says. Often they go out at night as a team and divide their loot.

It's been a long time since Alex has seen the insides of a supermarket. On a single night of diving, he can find enough to make ends meet for an entire week. Pay for groceries? "I don't do that anymore," he says.

For tomorrow's lunch there will be Asian-fried vegetables, Alex says on the way home. The overstuffed backpack hangs low on his back. And the day-after tomorrow? Alex shrugs his shoulders. He'll see what the contents of the next trash bin inspire.