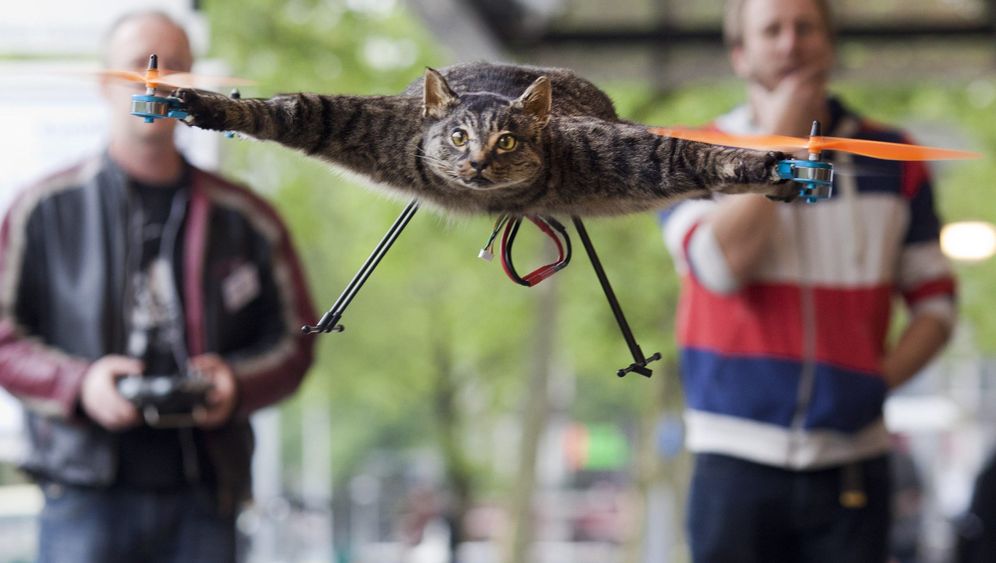 Dutch artist Bart Jansen has found an unusual way to pay his last respects to his pet cat Orville, who died after being hit by a car. He turned the feline into a helicopter, or a quadrocopter to be precise, with four rotors, each fitted to one outstretched paw. Now the dead tabby is flying around with a startled look on his face, provoking amusement and shock in equal measure.

"The Orvillecopter, half cat, half machine," Jansen wrote on his website. "Named after the famous aviator Orville Wright. He was killed by a car. After a period of mourning he received his propellers posthumously."

Jansen adds, rather defensively: "For the cat lovers: it's a tanned hide, just like the shoes you're wearing."

Jansen got help from model airplane pilot Arjen Beltman to mount the rotor blades in a way that ensures maximum flight stability on what surely must be the world's first feline helicopter. A plastic undercarriage allows dignified landings.

A video on Jansen's website shows Orville's first, rather unsteady test flight in March, during which he hovered a few inches from the ground to the sound of cheers and laughter from an unseen crown of onlookers. Since then, his flying has improved and he travels at considerable speed, emitting a loud buzz and steering with a fin attached to his tail.

"Soon to be flying with the birds. Oh, how he loved the birds," wrote Jansen, whose art project has become a Youtube hit.

The reaction has been predictably mixed, though. One viewer called JoergDD2DX commented: "Bart, you're just perverted, but no artist!" Hamdan370 writes: "This is sick. Lay the poor cat to rest." But Devilchris86 writes: "HAHAHA, I can't stop laughing! That's hilarious!"

Animal rights group People for the Ethical Treatment of Animals told msnbc.com: "It's a macabre way to honor a beloved family member."

Orville is currently being exhibited at an Amsterdam gallery as part of the KunstRAI art festival. Jansen plans to fit more powerful motors to his paws at a later stage.

Jansen's other works include the "Ku Klux Klock," which has a little hooded member of the Ku Klux Klan that pops out on the hour instead of a cuckoo bird.