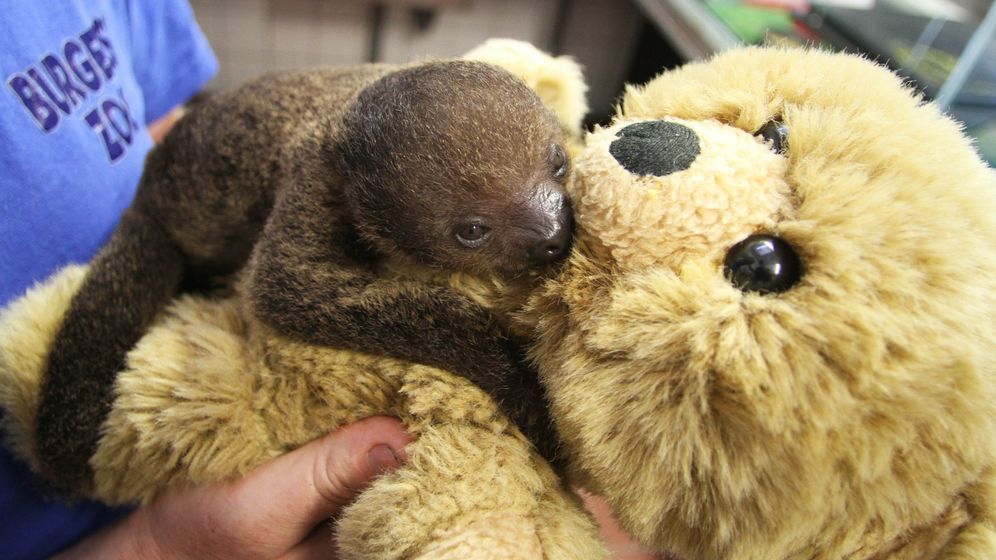 Soon after Sjakie was born on May 19, the baby sloth began making noises that indicated it was hungry. Zookeepers at the Burgers' Zoo in Arnhem, the Netherlands, quickly figured out that the mother wasn't producing enough milk, and that the baby would need to be fed with a syringe.

The only problem is that baby sloths cling to their mother's fur while feeding, so they needed a cuddly substitute.

"We tried to find something that resembled the fur of the mother," zoo biologist Wineke Schoo told SPIEGEL ONLINE on Thursday. "In the zoo, we have lots of shops with teddy bears, so we tried some."

Baby Sjakie, however, didn't care for any of them. But then the 2-year-old daughter of one of the zookeepers heard the story and offered up her own teddy bear.

The infant took to the unnamed bear and now grasps it while zookeepers feed her extra milk as well as pureed vegetables, such as carrots, fennel and zucchini.

The toddler "likes it very much that the sloth is using her bear," Schoo said.

Zookeepers got the idea after Sjakie's parents lost a baby in 2011, just a week after it was born. Even though the mother was "doing the right things," Schoo said, "it didn't go well."

They contacted zoos in Germany to find an answer and realized that Sjakie's mother, who is from a zoo in Zurich, may not be able to produce enough milk. A zoo in the western German city of Dortmund gave them the idea of using a teddy bear, sending pictures of the practice to the Dutch zoo. In 2008, the Frankfurt Zoological Garden also used the same technique to feed their new sloth baby, Oskar.

Since sloth baby Sjakie sometimes urinates on the stuffed animal, its handlers got it a second similar teddy they can put in the washing machine.

Sjakie's mother still takes care of her baby, too. The sloth "hangs with her mother, she is really relaxed," Schoo said.

Keepers still don't know, however, whether Sjakie is a male or a female. Schoo says that because sloths' genitals are inside their bodies, they will need a sonogram to determine its gender.

"But, for now, that is not important," Schoo said.