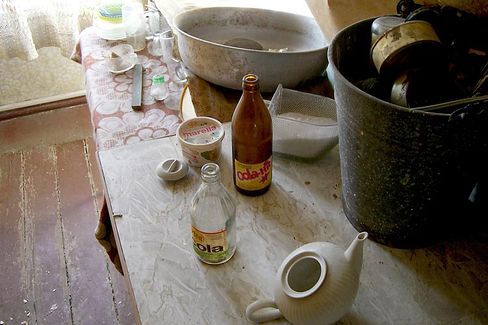 Empty bottles and dishes on the kitchen table: A long-abandoned apartment has given a glimpse into life in communist East Germany.

Almost 20 years after the fall fo the Berlin Wall an architect has come across an abandoned apartment in the eastern German city of Leipzig where time has stood still since the communist era.

It evidently hasn't been touched since early 1989, before the fall of the Berlin Wall, and the place is filled with East German furniture, fittings and grocery brands that give a glimpse of everyday life in the communist German Democratic Republic (GDR) 20 years ago.

Mark Aretz, an architect who renovates buildings in eastern Germany, inadvertently walked into history while he was refurbishing a building in the Leipzig district of Reudnitz last week. When he unlocked an apartment on the third floor it was as if he had stepped out of a time machine into the humdrum surroundings of the kind of apartment millions of East Germans once lived in.

A wall calendar showed August 1988, and the kitchen cupboard and drawers contained plastic crockery and aluminium cutlery along with food brands that would delight fans of GDR nostalgia these days: an empty bottle of "Vita" Cola, "Marella" margarine, "Juwel" cigarettes and a bottle of "Kristall" vodka.

"When we opened the door we felt like Howard Carter when he found the grave of Tutankhamen," Aretz told the Frankfurter Allgemeine Zeitung newspaper. "Everything was a mess but it was like a historic treasure trove, a portal into an age long gone."

There were shrivelled bread rolls in a plastic net bag of the type widely used in the GDR, a full ash tray, dirty plates and food remains in a pot on the two-flame gas hob.

The apartment has no toilet -- there's a public one on the landing -- and there's a zinc bath standing upright against the wall next to the wardrobe in the bedroom. Everything in the flat was made in East Germany apart from a West German bottle of Henkel deodorant -- someone must have brought that over from the West, the architect assumes.

Aretz said the occupant appears to have left in a hurry at some point during the months of confusion that preceded the fall of the Berlin Wall in November 1989, and that documents and letters showed he was a 24-year-old-man who had been in trouble with the authorities.

The most recent document was dated May 1989 -- a police search warrant for a caravan. There was also a stamped and addressed postcard written by the occupant, but he had never sent it.

Aretz and his team of builders have refurbished more than 150 buildings with more than a thousand apartments in eastern Germany since 1990, but he said it was rare to find a place so completely untouched. However, it is not the first unusual discovery he has made. He once found the corpse of an old man amid bundles of editions of the local Leipziger Volkszeitung newspaper dating back to 1938.