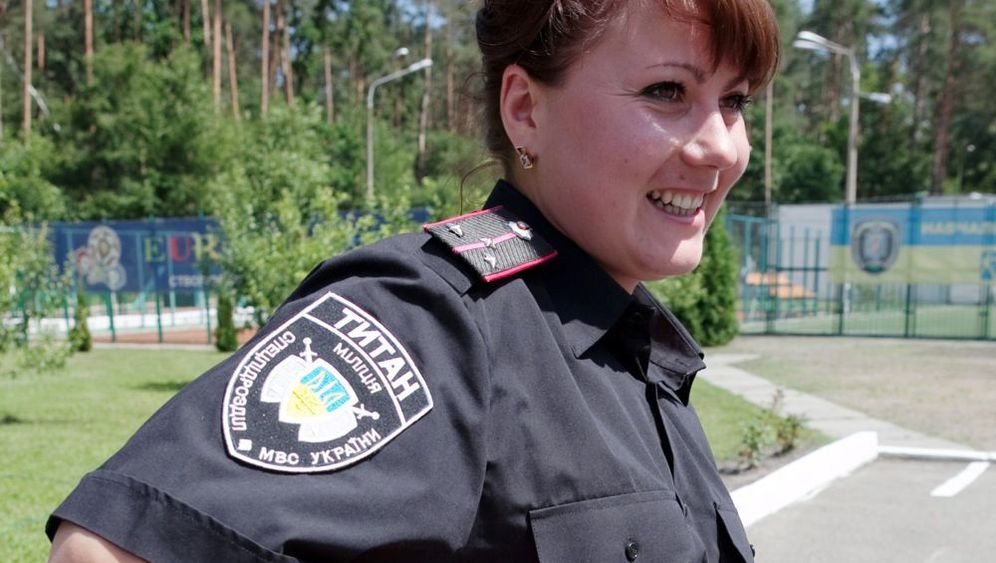 As the sunlight catches her carefully manicured fingernails, 25-year-old Katja perfects her disguise. She elegantly steps into high-heeled shoes, slips on a turquoise blouse and clips a string of pearls around her neck. She's also wearing a holster. In it she carries the standard Ukrainian police-issue firearm -- a black Fort-12 semi-automatic pistol.

Shots ring out over the training grounds northeast of Kiev, the Ukrainian capital. Here, surrounded by a forest, a special unit of the country's police force is being trained. But the members of the unit rarely serve in uniform. Instead, they are far more likely to wear pantsuits or miniskirts.

Women like Katja are trained by the "Titan" unit of the Ukrainian police to become bodyguards. They usually provide security for Ukrainian politicians and rich businesspeople, though they can't reveal exactly who they work for. But as the 2012 European Football Championship heads towards its climax, with the final in Kiev on Sunday, the bodyguards have found a new client base. They are protecting dignitaries from UEFA and foreign football stars.

Viktoria stands at the shooting range and fires shots until her magazine is empty. As the 24-year-old puts her Fort-12 pistol away under her jacket, she looks inconspicuous -- no different than the businesspeople that she usually protects.

After finishing school, Viktoria studied law at the Academy of the Interior Ministry. But instead of pursuing a job in the civil service, she decided to become a bodyguard. "Both my parents worked in the police force, and I wanted a similar job," she says.

"Women make better bodyguards," says Alexander Tsaplya, who has been training bodyguards for eight years. "They react faster." Men think about strategy when under attack, but women react on intuition, he says. Women are also better able to handle the stresses that come with the job. "Guarding a stranger every step of the way for 24 hours is mentally exhausting," he explains.

But who are the clients? According to Svetlana Vladimirovna, spokesperson for the Titan unit, some 70 percent are businessmen and their families. The rest are politicians, bureaucrats or foreign dignitaries.

Titan receives about 200 applications from women every year, but only seven make it through the selection process. The deciding factor is "solely based on mental strength," not on looks or muscle mass, says Tsaplya. A bodyguard has to be able to sense danger in advance, explains the trainer. And they must be able to function like machines in extreme situations.

Ludmilla, 28, demonstrates how she deals with assailants in a training session. As a screaming man lunges at her with a knife, Ludmilla grabs his arm, lifts him through the air, throws him to the ground and holds her pistol to his temple.

Before starting her training with Titan, Ludmilla was a Ukrainian language and literature teacher. She was lured into the bodyguard business because of the salary -- it's rare for a teacher to make more than €250 ($300) a month in Ukraine.

Between them, Katja, Ludmilla and Viktoria have protected their clients from multiple assassination attempts. But it's dangerous work. Two years ago, two of their male colleagues were killed when contract killers stormed an office building and assassinated the businessman they were guarding. "In this unit, they know they are risking their lives," Tsaplya says.

Katja has been married for three years. She says that her husband supports her career choice and that they dream about starting a family. According to the rules of Titan however, Katja would have to leave if she had more than one child. "Then the family has to take precedent," says spokeswoman Vladimirovna.