Eddy Sweeney, an intelligence officer, and Jonathan Mills, a radio frequency transmissions technician, were both stationed at United States Air Force bases in Germany when they came up with the idea to put together a publication for fellow gay service members.

What began as a conversation between two American soldiers based abroad became a magazine on LGBT life in the military that hit the shelves for the first time on Tuesday, timed to coincide with the repeal of "Don't Ask, Don't Tell" (DADT). It is also the day that their full names became public for the first time.

"OutServe Magazine has its origins in Germany," Sweeney told SPIEGEL ONLINE, explaining how an underground network for LGBT troops expanded to include a magazine complete with contributions from around the globe.

While Sweeney said he has long looked forward to the repeal of "Don't Ask, Don't Tell," something he called "surreal," he said it was the requirement to remain closeted that first led to his friendship with Mills.

The two met when Mills and his then boyfriend went out for drinks with friends in Kaiserslautern, Germany, home to the largest overseas military community. Mills, based at Spangdahlem Air Base, and Sweeney, based at Ramstein Air Base, began to notice something on the private Facebook group for OutServe, an organization for actively serving LGBT troops founded in July 2010. Many gay service members didn't not know their rights or understand the latest developments in the repeal of the DADT policy.

To address the misconceptions and bring personal stories to the discussions on policy, Mills and Sweeney discussed the idea of a bimonthly newsletter, but finally settled on a magazine so they would have room to feature more content. They teamed up with OutServe cofounders Josh Seefried and Ty Walrod on the project, and in March 2011, OutServe Magazine launched its first issue of 18 pages, available online.

"It took off," Sweeney said, and Mills added that advertisers and readers alike were eager to see more. The second issue, released in June for the first time in print, was called "The Identity Issue." It featured articles entitled "A Marine Company Commander Gets Personal" and "Repeal Watch."

Past publications limited the names of most editorial board members to initials, listing Executive Editor "J.M." and Managing Editor "E.S." -- but with the end of DADT on Tuesday, the editors could finally reveal their full names. "It has been difficult trying to coordinate the overall production," said Mills. "There are a lot of people we try to reach out to, and it is hard to do that if we can't be honest about who we are."

Since its launch, the OutServe network has grown to include 4,000 actively serving gay troops in 40 chapters, including one in Germany, another for the Service Academies, and one for deployed troops in Afghanistan and Iraq. The staff and editorial board of the magazine has expanded to include a design director, heads of distribution and advertising, and acclaimed author Nathaniel Frank, who wrote "Unfriendly Fire: How the Gay Ban Undermines the Military and Weakens America."

Along with the end of editorial anonymity comes a greater public presence for the publication. Starting Tuesday, the Army and Air Force Exchange Service will carry OutServe Magazine on select bases next to other military publications. It's a huge step forward not only for the military, but also for reaching potential readers.

"Previously, we were at the mercy of unit commanders saying 'we support this' and they would order copies," Mills said. "But having them at base exchanges allows people not assigned to these units who may not know about the magazine to pass by it on the shelves."

OutServe Magazine will add a new voice to the checkout stands on bases that have long offered publications such as Airman Magazine and Military Spouse Magazine.

"One of the things we noticed was that many of these magazines had themes and tones targeting a straight audience, like advice for families, or what to do when your spouse is deployed," Sweeney said. "We wanted to provide an avenue for our LGBT and straight counterparts to write things that would be of interest to our community and feature the issues we care about."

Out of the Shadows

In "The Repeal Issue," active duty US military members stationed around the world officially "come out" in a spread called "101 Faces of Courage." The feature includes the smiling faces of Staff Sergeant Jonathan Mills and Captain Edward Sweeney.

"After centuries of serving in the shadows, we are stepping forward and publicly expressing our commitment to our country and a commitment to our values of integrity, openness, and equality for everyone," the OutServe Magazine website reads, adding that the new issue features "pictures, bios and duty stations of the LGBT men and women who have finally been given a voice by their Nation."

"When 'Don't Ask, Don't Tell is officially dead, there will still be a lot of hesitation among service members to be honest about who they are and to say something," Mills said of the decision to have soldiers open up about their sexuality in the upcoming issue. "So we wanted to, one, say to Americans 'you elected members of congress who legislated our freedom, and here are our faces, thank you,' and two, encourage other LGBT members to step forward and be honest and know that they're not alone."

While OutServe Magazine is funded and operated independently, Sweeney said there has been coordination with and support from official channels within the Department of Defense.

"We've worked hand in hand with the repeal implementation team, and we've tried to work in tandem with the Pentagon," he said. "They've been very supportive, they've given us feedback, but it's up to us to decide on content."

The publication will appear in ten "strategic locations" on Tuesday, mainly at departure points for deployments. Hard copies will also be available in the Pentagon. But Sweeney hopes that circulation will eventually expand overseas.

"Being overseas fosters an environment where you become much closer with your peers, and those questions inevitably come up, like 'what did you do over the weekend,'" Sweeney said. "It becomes that much harder to be gay in the military."

Mills said that getting the magazines in bases abroad has been a challenge due to cost and the approval process, adding that "there is a lot we haven't been able to do because we've had to be anonymous." But both editors said that a major priority moving forward will be expanding distribution to bases abroad, and particularly in Germany, where they first found a voice for those who, until Tuesday, were silenced by "Don't Ask, Don't Tell." 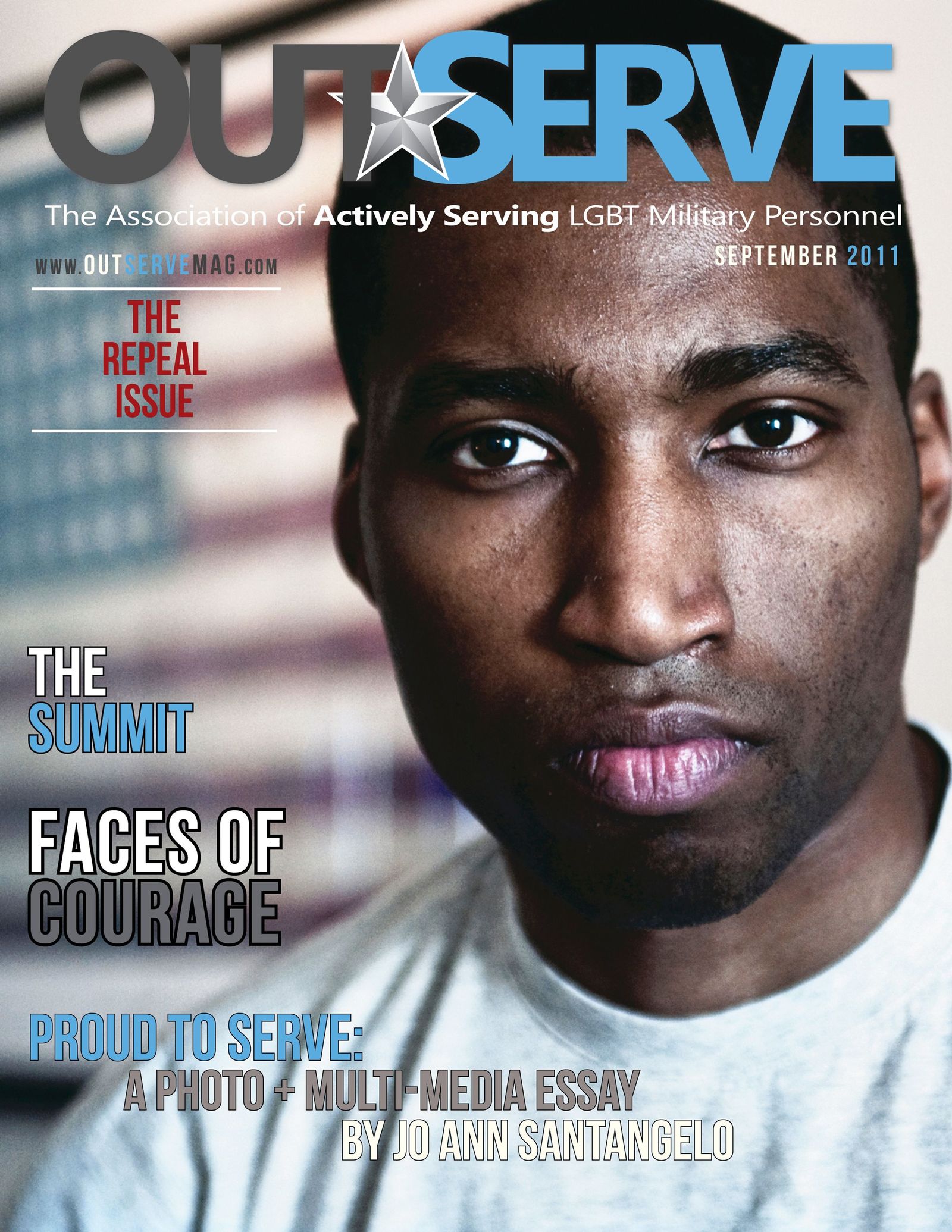 The US military's 'Don't Ask, Don't Tell' policy on homosexuality ended on Sept. 20.