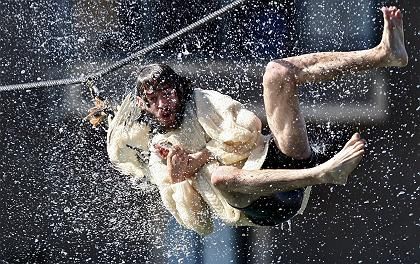 A man hangs from a goose"s neck during the "Antzar Eguna," the Day of the Goose, last September.

The Spaniards are doyens of weird fiestas but the annual "Day of the Goose" in the Basque coastal town of Lekeitio takes some beating, even by Spanish standards. It marks the high point of the week-long San Antolin festival which celebrates the patron saint of this pretty fishing village.

It works like this. A dead goose is suspended from a rope which is stretched across the harbor and held at both ends. A young man is rowed up to the bird, launches himself at it and holds on for dear life. Both ends of the rope are then pulled tight and slackened, which repeatedly propels the goose-decapitator and the bird into the air and then dunks them in the water.

To make the job harder, the goose is made slippery by covering it with grease. The idea is to twist or rip the goose's head off as quickly as possible while coping with the vigorous movement.

The competition involves a number of geese. Whoever gets the goose's head off most quickly wins, and if there's any dispute about the outcome, the teams hold a boat race to decide the winner.

The festival dates back over 350 years. These days -- and this may be some consolation to animal lovers -- the goose is killed before it is suspended.