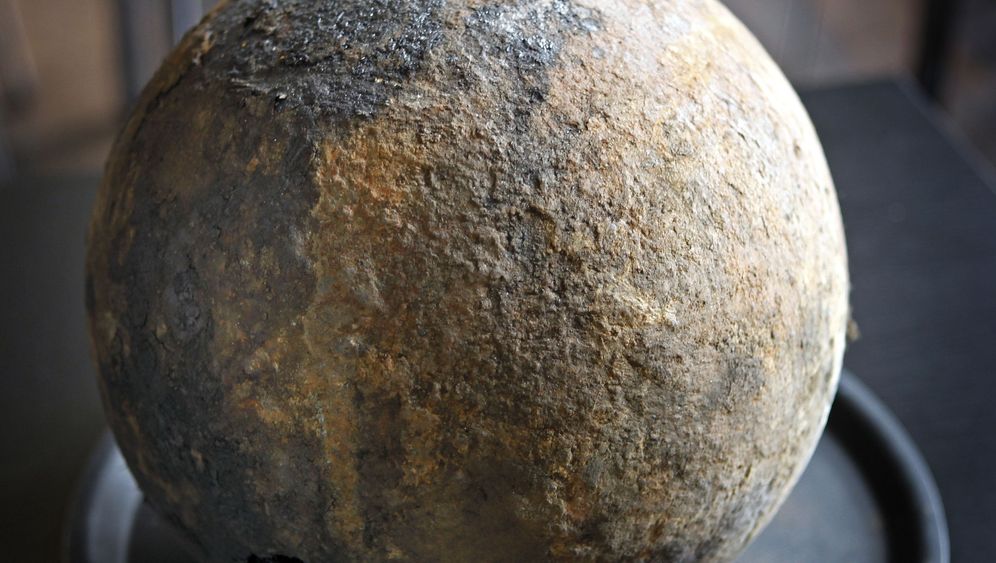 Photo Gallery: A Bomb from the Past

By dint of hard work and strict devotion to God, Christoph Bernhard von Galen (1606-1678) managed to attain the rank of prince-bishop. The man also liked to rub shoulders with generals and was fond of using gunpowder to lend authority to Jesus' words. His contemporaries nicknamed him "Bombing Bernd."

The freedom-loving Dutch, in particular, felt the wrath of this Catholic weapons-fanatic from Münster. In 1672, Galen sent heavy mortars rolling north, which his artillerymen filled with hollow iron shot weighing over 70 kilograms (154 pounds). These odd explosives shot high into the sky with a mighty boom. One fell into a moat, where it extinguished.

Nearly 350 years after that missed shot, the unexploded bomb has come to light again in the swampy soil of East Frisia, a coastal region in northwestern Germany. Archaeologists discovered it during excavations at the Dieler Schanze, a defensive fortifications site dating from 1580, near the town of Diele.

The object is larger than a medicine ball and cast from iron, with sides five centimeters (two inches) thick. "It still contains around seven kilograms (15 pounds) of gunpowder, and even the fuse is still there," explains archaeologist Andreas Hüser.

This find, the first of its type, is "more than significant," says Volker Schmidtchen, an ammunition specialist and author of several books on military history. An expert on the medieval fortress at Coburg in western Germany also describes the find as a "sensation."

Another shell, identical in its construction, surfaced at the Dieler Schanze last year. The excavators were so alarmed, they called in a team of explosives experts from a military technology station in nearby Meppen and kept their discovery a secret at first. Further testimony that soldiers once camped at this Frisian fortress is provided by broken tobacco pipes, boots and rusted hand grenades. Archaeologists have also found the remains of detonated bombs.

Hüser is certain these weapons belonged to Galen's arsenal. The prince-bishop once stormed the Diele fortress, attacking the rebellious Dutch with an army 25,000 strong. Sources say artillery shells rained down on the Dutch province of Groningen.

Some researchers could hardly believe the news of the explosive finds. Documents from 1326 do report the first instances of armies using gunpowder to sling stone cannonballs into the air -- the heaviest recorded projectile used for cracking fortifications weighed in at 697 kilograms (1,537 pounds). Soon after came experiments in filling the cannons' barrels with lead shot, red-hot iron balls or leather hides filled with shards and scrap metal.

But the history of artillery shells -- objects which exploded after reaching their targets with the help of a fuse -- was one marked less by glory and more by false starts, with many details lost to history.

It seems that around 1450, craftsmen began filling "hollow iron balls" with gunpowder for use as shot. Many times, the technique failed. The cannoneers first had to reach into the mortar's opening, light the bomb's fuse, then quickly fire the weapon. If their timing was off, the entire cannon would blow up in their faces before the projectile had left the barrel. They also often failed to correctly calculate the projectile's trajectory, a process done using quadrants. And sometimes the fuse went out in flight.

Military specialists of the time repeatedly "experimented in secret," Schmidtchen says. But the technology necessary for propelling bombs remained elusive and difficult to improve. During the American Civil War from 1861 to 1865, the two sides still shot each other using solid iron balls.

Bishop Galen, the Dr. Strangelove of Catholicism, may well have been ahead of his time. The shells now discovered have an opening containing a wooden stake, drilled down the middle and containing gunpowder that reaches as far as the explosive charge inside the cannonball. Attached to the outside of the ball is netting made of thick cords that all connect to the wooden fuse. "The cannonball was also coated with bitumen and wrapped in rough cloth," Hüser adds.

The researcher surmises this signifies that the metal ball self-ignited from the heat at the moment it was fired from the cannon and burned as it whizzed through the air.

"An appealing idea," Schmidtchen admits. Scientists have now turned to chemical analysis and X-ray images to unravel the puzzle of the fuse mechanism.

An old portrait of Galen, meanwhile, seems to support Hüser's theory. It shows the prince-bishop wearing a stern gaze and black church robes. Behind him is a sky full of fiery projectiles shooting through the air.

Those aren't stars of Bethlehem -- they're Galen's holy grenades.

3 Bilder Photo Gallery: A Bomb from the Past