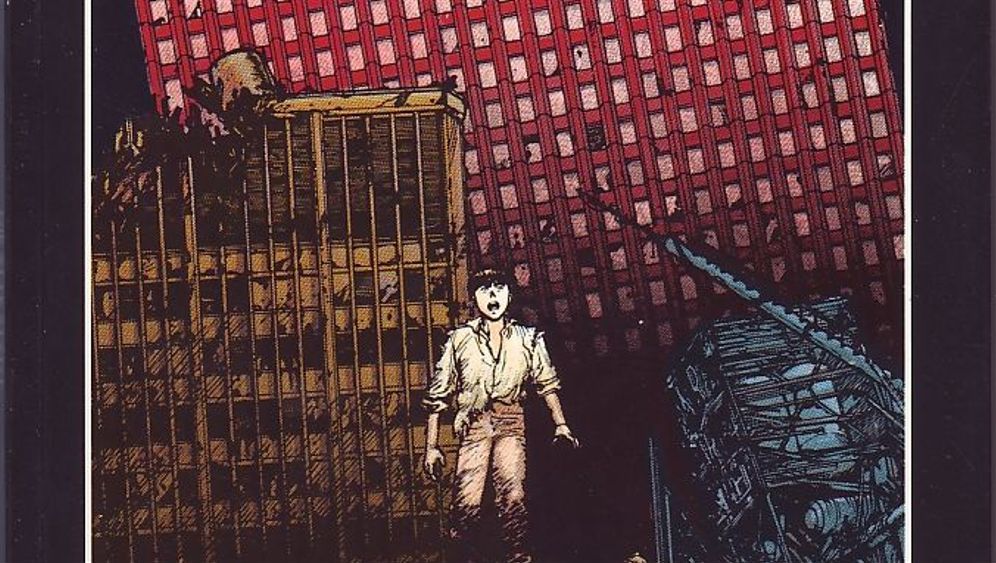 Photo gallery: The Culture of 'Artificiality'

There is a five-meter (16.4-foot) brown robot on the roof of Hayao Miyazaki's museum. Head lowered, arms dangling by its sides, it towers like a sad memorial over a fairy tale world in a park outside Tokyo, in the suburb of Mitaka. Narrow canals built in the 17th century permeate the neighborhood. Couples row in small boats under the shadows of old trees. Cherry blossom season begins in two weeks. This could be a beautiful place.

Miyazaki, probably Japan's most significant contemporary film director, founded this museum, which looks like something the Austrian painter Friedensreich Hundertwasser dreamed up on an acid trip. It consists of a multicolored fantasy park with yellow walls, windows topped with blue Smurf hats, and green staircases. The strange comic figures from Miyazaki's animated films are everywhere. Everything is covered with ivy. The Ghibli Museum is an attraction for Japanese tourists, and it has a motto: "Let's get lost together."

Miyazaki is a sort of Asian Walt Disney. He won an Oscar eight years ago for "Spirited Away," a film that earned $230 million (€162 million) at the box office in Japan alone. Steven Spielberg worships his Japanese colleague, but he does it because Miyazaki is in fact precisely the opposite of Walt Disney. The world of Miyazaki's animated films is not a rosy; it's a broken place. His films are about the limits of human creativity.

There is a Miyazaki film from the early 1980s called "Nausicaä of the Valley of the Wind." It's his second-largest project, and it tells a post-apocalyptic fairy tale. The entire world is covered with a poisonous mushroom forest, a "sea of rot," forcing people to wear protective suits and breathing masks. Almost everything was contaminated after a brief, devastating war 1,000 years earlier. The survivors call the war "the seven days of fire," and now their fate depends on the wind. A princess named Nausicaä lives in a valley protected by updrafts against the toxic fungal spores. One day she discovers plants that could clean the contaminated soil. Her mission is to save the world, even though it was lost long ago.

Miyazaki, now 70, is an icon of Japanese popular culture. In his films, he has always wanted to show things that no one had ever seen before. But the Ghibli Museum closed for almost two weeks on Friday, March 11 -- when reality caught up with Miyazaki's visions.

Pop Culture and the Tsunami

There is a photo taken by a photographer after the earthquake struck the city of Natori in northern Japan. Natori, home to about 70,000 people before the tsunami, is a scene of devastation today. In the photo, a weeping girl cowers by the road. She is about 20, her hair is dyed red, she wears a black jacket and she hugs her bare legs. There is a pair of red rubber boots next to her, while the piles of rubble behind her represent the remains of civilization.

The city looks as if Godzilla has walked over it.

Or as if the set designers for director Akira Kurosawa had decided not to remove the sets for the nuclear disaster sequences in his film "Dreams" after the shooting ended.

Or as if Hayao Miyazaki had dreamed up this girl, who might easily have stepped out of an animated film, as bizarrely cute as a Manga figure -- even though she's crying. It doesn't take much imagination to picture her with barrettes in her hair, hopping down a street and singing a hysterically upbeat J-pop song.

For Westerners, Japan's popular culture has always seemed a bit strange, garish, hysterical and manic. There are the weighty images of samurai battles that Kurosawa designed in his monumental historical films, the colorful and hideous comic images by famed Japanese painter Takashi Murakami, the Godzilla films, in which radiation-created mutant monsters devastate Tokyo. There are the Pokémon cards with their strange creatures, and there are the Tamagotchis, small digital pets kept on key chains that peep when they want to be fed. There's the vastly profitable, popular art of the Manga comics, in which heroes have eyes like headlights in a land of narrow gazes; there's a youth culture that seeks to transform the Manga ideal of beauty into reality.

A culture of artificiality? Or perhaps it was reality, after all -- just a little hard to recognize from a distance. Perhaps it was so difficult for us to understand Japanese pop culture because we failed to realize that Japan had outsourced its understanding of catastrophe to its most whimsical modes of expression.

A Sequence of Shocks

This island nation on the edge of the Pacific makes life hard for its inhabitants. It seems to resist human comfort wherever it can. Only about one-fifth of the islands are habitable, with the remainder consisting of mountains and forests. Earthquakes were there before people arrived. In 1923, the most serious earthquake in modern Japanese history killed more than 140,000 people in Yokohama and Tokyo. A major earthquake in Kobe in 1995 also claimed many thousands of lives. In fact, the earth shakes about once a month in Japan.

The history of Japan since the 19th century is a sequence of shocks. As recently as the 17th century, foreigners faced the death penalty for stepping on Japanese soil, and even about 150 years ago, the country was still cut off from the rest of the world. Then came trade relations with the West and radical modernization. The country absorbed European and American influence, made them its own and rushed headlong into innovation. It began its bloody war of conquest in Southeast Asia and eventually aligned itself with the Nazis. Japanese soldiers committed horrible atrocities in World War II. In the end, atom bombs were dropped on Hiroshima and Nagasaki.

The word tsunami is of Japanese origin. It's translated into seemingly harmless misnomers in other languages, like "harbor wave" or "tidal wave" in English. In this country of catastrophes, there is no word for catastrophe in the apocalyptic sense, as there is in the West. There are images instead. These images -- in art, in the cinema and in animation -- say a lot about the way Japan has dealt with the great catastrophes of the century and about resistance, overcoming adversity and repression.

'This Wave Cleanses Our World'

The studio of animated filmmaker Miyazaki is in a commercial zone a few kilometers west of downtown Tokyo. A cardboard cutout of Totoro, a character from one of Miyazaki's films, stands next to a small reception building. Everyone in Japan knows the friendly forest spirit Totoro, a mixture of rabbit, owl and cat. It greets every visitor to the Ghibli Studio with the word "idiot." Miyazaki has gray hair and is wearing glasses the size of Manga eyes. He was all smiles when he met with journalists from Germany a few months ago to talk about his recent film "Ponyo."

The film tells the story of a little boy who lives in a Japanese port city with his mother. When he finds a goldfish on the beach, he rescues it and takes it home. Soon afterwards, a giant wave rolls toward the coast, tearing ships from their moorings, washing away buildings and flooding roads. The power goes out, but the people remain calm.

Like a sleepwalker, the mother drives along the flooded coastal road in total darkness. The boy hangs on to the stern of a rowboat and paddles with his legs as if he were an outboard engine. The residents of a retirement home survive in an underwater air bubble and become as lively as if they had just bathed in a fountain of youth.

"This wave cleanses our world and washes away the garbage," Miyazaki said about the film, which came out in Japan in 2008 but had various European debuts in 2010.

Was he praising the healing powers of the apocalypse, the purification of civilization by a tsunami? It wasn't easy to understand then, on a humid summer day when the earth was still, when Miyazaki, revered in Japan, gave one of his rare audiences.

"When the water has receded," he says, "rebirth can begin." People will be purified from within, according to Miyazaki, because they will be forced "to do without the comforts of modern life, like electricity, for example. When we press a light switch today, we expect the lights to come on. But that isn't to be taken for granted."

His characters find their way around in the dark. The children, in particular, are unafraid of even the deepest darkness. As a child during World War II, Miyazaki experienced the blackouts that were meant to protect against American bombing runs, although they proved worthless against the atom bombs dropped on Hiroshima and Nagasaki.

"I perceive the fragility of our civilization very strongly and talk about it again and again in my films," says Miyazaki. "This certainly has something to do with the war and postwar years, which shaped me, but even more importantly, with the constant threat of earthquakes and tsunamis that we face. We are always walking on eggshells."

For centuries, this country has lived with the feeling of constantly having to be prepared for the worst. Everything the Japanese have created over the centuries can be destroyed within seconds. No other country is as highly developed and simultaneously as directly at the mercy of the forces of nature. Miyazaki uses this contradiction repeatedly as a theme in his films. He is Japan's greatest eco-director, single-mindedly telling the cautionary tale of how technology that can no longer be controlled destroys itself and nature -- and yet ultimately succumbs to the uncontrolled growth of nature.

Miyazaki points to a pond and a building outside. "Do you see that kindergarten? It's for the children of my employees. The facility is designed so the children can take care of themselves after an earthquake and find sufficient water and food." Hollywood disaster films depict explosions and devastation, with women and children panicking. "I think that's horrible," says Miyazaki. "No matter what happens, that won't be the case here."

"Everything that is complete can end in ruins at any time," says Miyazaki. "Is man the pinnacle of creation? Probably not. Perhaps we would all be more modest if we occasionally reminded ourselves that we began as amoebas. But mankind has moved so far away from nature that a return is hardly possible anymore."

In his films, the sea resembles a living creature, and fire has a mouth and eyes. It can even speak to issue warnings. Miyazaki gives a human face to the forces of nature, perhaps so that his audiences can accept them more readily. He believes that it will never be possible to subjugate nature with the help of technology. "There will always be tragic events like earthquakes and tsunamis," he says. "What can you do about it? There is only one solution: Conceive as many children as possible."

'We Were Very Afraid'

Last Thursday, someone answered the phone at Miyazaki's Ghibli Studios. It was Satoko Takano, his assistant of many years. "We were very afraid," she said. "We have never experienced such a strong earthquake."

Takano spoke in short, precise sentences. She said that she couldn't stay on the phone for long because the power was about to be shut off again in a few minutes. Studio operations had been shut down for seven days, and the staff had just started working again. No one knew if they'd have to stop again soon.

Takano also said that Hayao Miyazaki would only comment on the earthquake and the nuclear accident once the situation had stabilized. But he was doing well, she added, and so was his family. "He is working on several new projects in the studio at the moment."

"It's hard to be calm in the face of such a disaster," she said. "I have to hang up now. The power is about to go out."