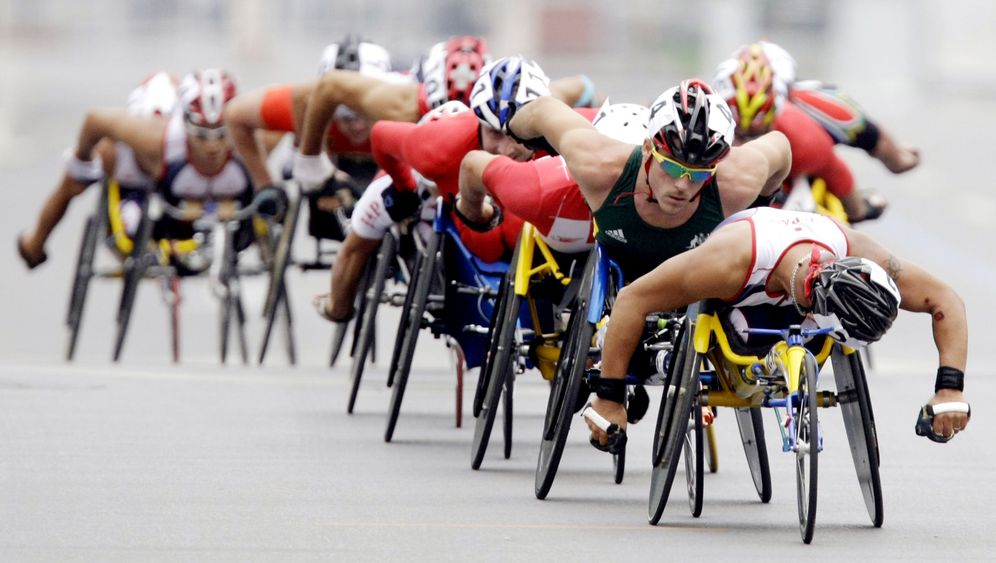 Photo Gallery: Pretending to be Disabled

Jürgen Schmid poses the question to the man sitting in front of him in a casual manner, as if the answer were obvious. "Can you stand up?"

"Mais non," the French athlete in the blue tracksuit top answers -- of course not. He says that he has been a paraplegic since an operation went wrong 11 years ago.

Schmid reaches for a measuring tape and places it around the athlete's thigh. It measures 50 centimeters (20 inches) around. "Pretty thick," he says, and then he pinches the athlete's calf and kneads it like a piece of dough. He runs a ballpoint pen across the bare sole of his foot. "Do you feel that?" The Frenchman says no again. "You have strong muscles in your legs, and I wonder why," Schmid replies.

It's a Friday in April in the town of Rosenau in the eastern French region of Alsace, the day before the world's biggest handbike race is set to begin. Handbikes are tricycles that are propelled with cranks moved by the rider's arms -- wheeled vehicles for people who are unable to walk.

Before the race can begin, Schmid examines the athletes in the conference room of a hotel. They include paralytics, spastics and leg amputees. Schmid is a physical therapist from Hamburg. He is also working here in Alsace as a medical investigator. He is supposed to track down athletes who are faking a disability.

Schmid decides that the Frenchman with the thick thighs is legitimate. But he remains skeptical, and he wants to observe the handbiker in a race. Perhaps, he speculates, the man is capable of more movement that he has just demonstrated.

The public is particularly fascinated by disabled people who engage in high-performance sports. They are ambassadors of hope who set an example for everyone, because they have not only come to terms with their fate, but are also capable of incredible physical achievements despite their handicap.

Events like the upcoming Paralympics in London are always bathed in a special aura, a combination of competition and spirituality. There is more at stake than medals. In fact, disabled sports are mostly about respect.

But there is even trickery, deception and lying in disabled sports. There are plenty of dissemblers among the participants, people who, in medical inspections, deliberately paint their state of health in more dramatic terms than it is, thereby competing under false pretenses in events that are becoming increasingly popular and also provide the opportunity to make a lot of money.

One of the most spectacular cases was discovered about three weeks ago. The Dutch handbiker Monique van der Vorst had won two silver medals in the 2008 Paralympics. But after that she suddenly experienced a seemingly miraculous recovery. In the summer of 2010, she claimed that she had regained sensation in her legs after 13 years in a wheelchair. Since then, she said, she could stand up, walk and even ride a racing bike again.

Now Van der Vorst has had to admit that she was also able to stand and walk during her career as a paraplegic handbiker. Former competitors and neighbors had reported often seeing the athlete outside of her wheelchair -- taking a shower, or even dancing. Van der Vorst was a sports celebrity in the Netherlands, and now everyone is outraged. The newspapers are calling it a "scam" and a "lie."

All the athletes, trainers and officials in Rosenau are talking about the fallen disabled sports icon. Everyone is wondering how she managed to cheat her way through the classification for years.

'Someone Who Really Wants to Fake a Handicap Can Do It'

The classification system is the backbone of Paralympic sports. To ensure that every athlete has the same chances, all athletes are examined and assigned to a suitable class. It's the disabled sport world's equivalent of automobile inspections. Doctors and physical therapists test the athletes to determine what they can do despite their handicap. They measure the athletes' body parts, and they check reflexes, muscles and coordination.

There are competition-like tests, in which the athletes, depending on the type of sport involved, have to demonstrate which movements they can perform on wheels, while throwing the javelin or in a sailboat. There are 41 classes in track & field alone. The lines between the classes are fluid.

"Our testing is rigorous, but someone who really wants to fake a handicap can do it," says Schmid. the physical therapist. He has been working as a classifier for the International Cycling Association for 16 years. "Some athletes hold themselves back and downplay their performance in the tests," says Schmid. He compares it to someone blowing lightly past the testing kit during a police alcohol check.

In one case, Schmid examined a handbiker in a wheelchair before a race. He had indicated that he was paraplegic. When Schmid palpated his back muscles and his spine, he quickly realized that the man could walk. The athlete confessed everything. He had apparently borrowed the wheelchair from a friend shortly before the examination.

During a European championship, Schmid noticed a female athlete sitting at the breakfast table with perfect posture. But during the examination on the previous day, she had said that she could neither sit up straight nor bend at the hip. On another occasion, the physical therapist saw a Belgian cyclist making a phone call while eating. During the examination, the man had pretended that his arm was paralyzed -- and now he was using the very same arm to hold his mobile phone up to his ear.

When the classifiers have doubts, they continue to observe the athletes after an examination. They watch how the athletes move at their hotel, and they observe them in the elevator and at the buffet. Sometimes, says Schmid, he's "also a bit of a detective."

In the 1996 Paralympics in Atlanta, 11 athletes were sent home after cheating their way into favorable classes. At the Sydney games in 2000, the Spanish mentally handicapped basketball team won the gold medal. It later turned out that 10 players were completely healthy. They had never completed the IQ test that was supposed to have been administered.

The temptation to engage in deception is especially great during the Paralympics, which have now become the world's most important event in disabled sports. Stars like Oscar Pistorius, a sprinter with prosthetic legs, brought global renown to the Paralympics. Some 3.8 billion TV viewers watched the competitions in Beijing. After three weeks, more than a million tickets had already been sold for the Paralympics in London this summer.

The International Paralympic Committee (IPC) is now trying to impose tough penalties on the fraudsters, just as athletes who use performance-enhancing drugs are sanctioned. The penalties include being barred from competition for up to two years. There is more at stake than just the competitive advantage the athletes gain for themselves. In fact, the damage to the image of disabled sports is almost worse.

On the other hand, a precise diagnosis is problematic with many athletes, especially the visually impaired. "The eye is the most difficult part of the body to examine. The blood vessels and nerves are tiny, which means that we have to work in micro-ranges," says Axel Bolsinger. The ophthalmologist from Bendorf in western Germany was a classifier for the IPC for 15 years.

Blind athletes compete in many disciplines, including swimming, track & field and cross-country skiing. They are not allowed to have more than 10 percent visual acuity. In the past, submitting a doctor's letter was often sufficient. Then Bolsinger introduced more precise tests to find out for himself how well the athletes could really see.

Prior to competitions, the eye doctor used highly sensitive equipment to examine the lenses, pupils and retinas of athletes. He even tested electrical activity in the optic nerve when he felt it was necessary.

It has now been revealed that the German swimmer Yvonne Hopf was revealed as a fake in one of these tests. Hopf was a star of the disabled sports scene at the time. She had won five gold medals at the Paralympics and was even invited to appear on "Wetten, dass…?", a popular German television game show.

In reality, Hopf had more than 10 percent visual acuity, and she was forced to end her career as a blind athlete. She obtained her driver's license soon afterwards. Hopf confirmed these details when SPIEGEL contacted her.

There are similar cases in winter sports. Athletes still joke about a Russian cross-country skier who competed as a visually impaired athlete at the Turin Paralympics in 2006. After she had reached the finish line with her escort, she turned her head to the display panel, which showed that she had won a medal. The allegedly blind athlete then threw her arms up into the air and cheered.

Until a few years ago, classification was like a friendly get-together, says physical therapist Schmid. The sessions began with some light-hearted conversation and laughter, and then a few tests were done. Everything was "very relaxed," says Schmid. But today, he says, some competitors bring their attorneys along to the classification.

Schmid once examined an Irish athlete at a world championship. His handicap was that he allegedly had a stiff ankle. But the cyclist had trained a lot and his injury had heeled well. Schmid refused to allow the athlete to compete, and said to him: "You're healthy, which means you've won more than a medal."

The athlete broke out in tears.