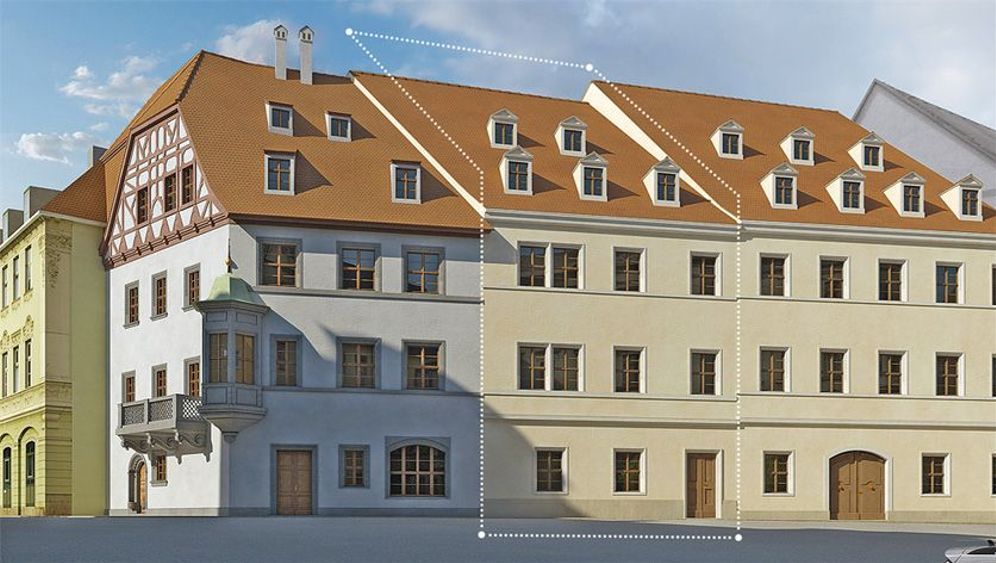 It may be a small city, but Weimar is the pinnacle of German high culture, more densely populated with great historical figures than perhaps any other in the country. Goethe, Schiller, Herder, Liszt, Wagner, Strauss, Nietzsche, Gropius, Feininger, Kandinsky, Klee and Thomas Mann have all called it home. Most of these luminaries get their due in some form in the city. But one is conspicuously absent: Johann Sebastian Bach.

The composer lived in the city for 10 years during the 18th century at Markt 16, right in the city center. The building he called home was torn down long ago, and the only things to be found at the site today are a bratwurst stand and a parking lot. There isn't even a plaque to note that an important Renaissance-era vaulted cellar is located beneath the cars. Bach likely kept his personal supplies there, including the generous provision of "30 kegs of beer" allotted him each year in addition to his wages for the musical services he rendered to the dukes of Weimar. Calculated over a year, that means that the Baroque composer had about nine and a half pints of tipple available each day.

"We need this site to commemorate Bach," says Myriam Eichberger, a professor at the Liszt School of Music who has organized an impressive roster of supporters for a petition on behalf of her campaign. The signatories include Nobel prize for medicine recipient Günter Blobel of Germany, South African Nobel prize for literature recipient John Coetzee, as well as star Austrian conductor Nikolaus Harnoncourt, known the world over for his televised annual performances of the Vienna Philharmonic Orchestra's New Year's Concert. Around 11,000 Bach fans worldwide have signed the online petition at change.org. They are seeking the reconstruction of the former building Bach lived in and for the historical cellar to be made accessible to the public.

The composer, of course, lived in other places around the state of Thuringia where he is commemorated today, with Bach houses located in Wechmar, Arnstadt and Eisenach, not to mention quite a number of churches where the musician played the organ, got married or had his sons baptized.

The Elephant in the Room

So far, though, it hasn't been the seeming glut of pilgrimage sites dedicated to Bach in Germany that has thwarted efforts by Eichberger and her fellow campaigners. The spanner in the works is Arabella Hospitality, a company which belongs to Munich's billionaire Schörghuber family.

In Weimar, the Schörghubers operate Hotel Elephant, a five-star establishment that has always been the prime address on the square. Both Goethe and Hitler count among the prominent guests who have overnighted at the inn. It so happens that the hotel also owns the property where Bach's house stood until its demolition in 1989. The local chapter of the Communist Party ordered that it be torn down the final winter before the Wall fell. Today it is used as a parking lot with 70 spaces, which Arabella Hospitality manager Reinhold Weise says are "essential and important for the hotel."

Even if the company that owns the hotel were to consider repurposing the property, Weise has other ideas for it, including a spa area and additional guest rooms. If those plans were to go ahead, the parking spaces could be relocated to an underground garage, Weise says. That, though, is a horror scenario for Bach fans because it would put the historic cellar at risk.

But such plans won't be pursued anytime soon. Arabella Hospitality doesn't believe the Weimar site is lucrative enough at the moment to justify significant investment. "We're a company that relies on generating profits," Wiese says.

For now, the site will remain a parking lot, providing Myrian Eichberger with more time to promote her campaign. "I'm a flutist and I'm quite capable of holding my breath for a long time," she says. Eichberger has already lined up initial funding. Bach fan Blobel, who now lives in New York, has offered to purchase the contested property at Markt 16.

A Boost for Tourism?

Bach moved to the building in 1708 at the age of 23 with his pregnant wife. He became the court organist and later the concertmaster for the dukes of Weimar. It was here that he composed the majority of his works for the organ and more than 30 cantatas. The cellar is the only tangible reminder of the maestro's time in the city. Indeed, the vaulted basement represents the only architectural remains of any building that has been officially recognized as a place where Bach once lived, says Eichberger. That, she adds, is why it is imperative that it be rebuilt. Someday, she hopes that lunch concerts will delight audiences in a resurrected Bach house.

Eichberger also thinks that ought to be more attractive to the Hotel Elephant than an underground car park. The hotel is featured as a setting in Thomas Mann's classic "Lotte in Weimar," a fact from which the hotel continues to profit today, Eichberger says. A memorial to the composer right next door could be even more lucrative, she adds.

"With all due respect to Thomas Mann," she says, "Johann Sebastian Bach was a titan."

Translated from the German by Daryl Lindsey