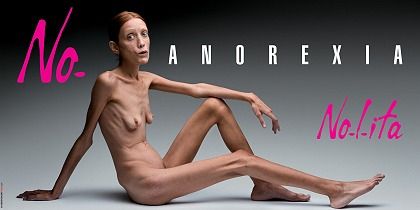 The Nolita ad campaign has shocked people with its image of an anorexic woman.

Back in 1992, photographer Oliviero Toscani caused controversy around the world with his pictures of a man dying of AIDS which formed part of a Benetton advertising campaign. Now he is back in the headlines with an equally shocking image of a naked anorexic woman, which a fashion chain is using to raise awareness about eating disorders.

The Nolita advertisement, timed to coincide with Milan fashion week, appeared Monday in Italian newspapers, including a two-page center spread in La Repubblica, and on billboards in Italy. A slogan above the naked photograph reads "No Anorexia."

Flash&Partners, the fashion group that owns the Nolita brand, said in a statement that Toscani's aim was "to use that naked body to show everyone the reality of this illness, caused in most cases by the stereotypes imposed by the world of fashion."

The woman in the photo is Isabelle Caro from France, who is 27 years old and has been anorexic for 15 years. She weighs a mere 31 kg (68 lb) and suffers from the skin disease psoriasis. "I hid myself and covered myself up for too long," she told the magazine Vanity Fair in an interview to be published Wednesday. "Now I want to show myself without fear, even though I know my body is repugnant."

Italy's Ministry of Health supported the Nolita campaign and Health Minister Livia Turco said it can "promote responsibility towards the problem of anorexia." Domenico Dolce and Stefano Gabbana also praised the ad. "Finally, someone says the truth about anorexia, that it's not a fashion problem but a psychiatric problem," the Italian news agency ANSA quoted the celebrity designer duo as saying.

However, many were shocked by the ad, including anorexia specialists. The president of Italy's Association for the Study of Anorexia, Fabiola De Clercq, said the model in the photo should be in hospital and the image was "too crude." The photo may even encourage anorexic women to lose more weight out of envy for the model, she said.

The problem of anorexia in the fashion industry has been in the spotlight since a 21-year-old Brazilian model died from the eating disorder in 2006. Madrid Fashion Week banned girls who were too thin from the catwalks, while Milan introduced a new code of conduct whereby models must carry medical certificates to show they do not suffer from an eating disorder.