It's good to see some are tightening their belts and trimming costs in these times of a global financial crisis. The world's most famous living fashion designer, 75-year-old Karl Lagerfeld, says he's scaling down his über-dimensional lifestyle. In an interview with the German weekly Die Zeit this week, the couturier says, "I have moved to a smaller house in Paris, and I don't fancy having so much staff now."

His domestic help won't all be unemployed, though. "The chambermaid, chauffeur and chef are still musts," he says, "around the clock." 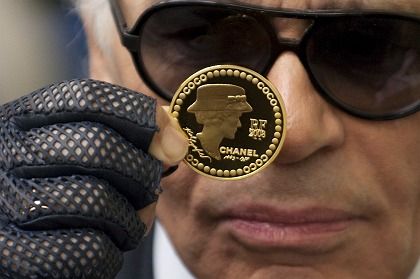 When Lagerfeld leaves home, he prefers to do so in the biggest model of Humvee, the magazine reports -- the car derived from US military patrols in Iraq. "I have three of them," Lagerfeld says. "Two here in Paris and one in Monte Carlo. ... The Hummer is like a tank and gives me a feeling of security."

Not a man known for his democratic tendencies, he says: "I don't want to drive at the same level as the others."

Nevertheless, he has a new vacation home in Vermont, which he admits is "not giant." It dates from 1840, "very Emily Dickinson ... In fact it's almost Puritanical. For me it's a new form of modesty."

Lagerfeld's industry, luxury goods, has been spared so far by the global financial downturn. "Fortunately there is more wealth in the world than there was at the time of the global economic crisis of 1929 -- Chinese, Indian, Arab and Russian. When the crisis ends, Europe will ultimately become the good Old World, and the New World will be represented by India, China and the Gulf states," he says.