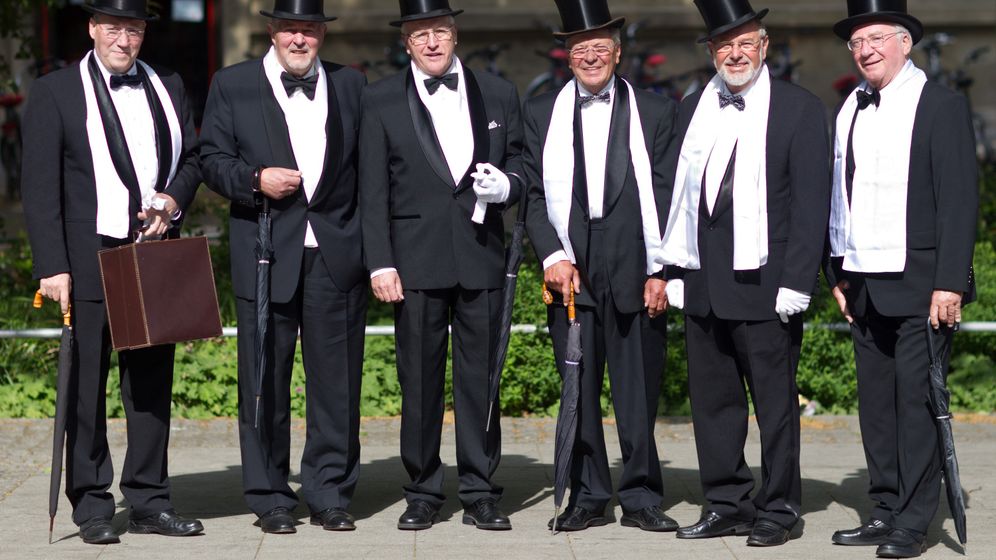 In some countries, the highlight of Father's Day can be as simple as the kids mowing the lawn, cleaning out the garage or serving him breakfast in bed. In Germany, though, it's the one day of the year when fathers are officially allowed to liberate themselves from their parenting duties -- or, it seems, any responsibility whatsoever.

In cities across the country groups of men can be seen pulling wagons packed to the brim with all manner of beer, schnaps, mixers and anything else that will ensure a messy, drunken afternoon and a head-pounding hangover the next day. By no means limited to fathers, Männertag or Herrentag, which translates as "men's day," is open to any male who wants to demonstrate his loutish, caveman side.

On Thursday, tens of thousands of German men celebrated their Männertag in "mostly peaceful" ways, as one news agency wrote. Another newspaper even ran the headline: "Men's day remains relatively quiet." Of course, that could be attributed to the high number of men who passed out from drinking before they could do any damage.

But each year, some idiot, in some town, is there to spoil the party with pranks gone bad. In the town of Troisdorf near Bonn, 25 people were injured, eight seriously, after a fireworks mishap in a party tent. A similar incident in Oberallgäu in Bavaria caused three injuries and led a crowd to flee a beer tent en masse after several men tried to add a little spark to the day of binge drinking.

A number of cities in Germany sought to impose public drinking bans on Männertag this year to cut down on the number of booze-fuelled fights and injuries, but courts in the state of northern state of Schleswig-Holstein overruled those efforts, saying they violated the constitutional right to freedom of action in a country where beer drinking is a part of the national culture.

In the northern port city of Rostock, police experimented with another way of curbing the debauchery by offering to swap people's alcoholic beverages with non-alcoholic ones. Of course, in a country where people like to mix their beer with Coke or 7-Up, its also questionable what effect handing out soft drinks would really have.

But the police efforts, as fruitless as they may prove to be, are not totally misguided. UDV, the German insurers accident research institute, reported in 2010 that there were three times as many alcohol-related traffic accidents on Männertag as on normal days, leading the tabloid Bild to dub the Ascension Day festivities as "Accident Day".