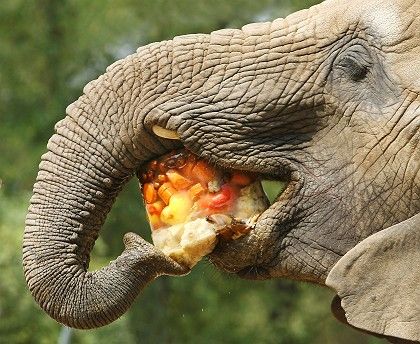 An elephant enjoys a block of fruit and vegetables frozen in ice at Erfurt zoo. Animals from the zoo were killed illegally and sold as meat, it has been revealed.

Lots of people like looking at animals in zoos. Lots of people also like eating meat. However the thought of the two things together tends to turn most people's stomachs.

But not all apparently. Employees at the Erfurt zoo, it was revealed Wednesday, have for years been killing animals and selling their meat for zoo stew. Germany is outraged.

The city of Erfurt quickly stepped in to quell the growing scandal, announcing on Thursday that zoo director Norbert Neuschulz had been relieved of his duties. The public prosecutor's office is investigating the case to see if any crimes were committed.

The animals killed were all "slaughterable" animals such as goats, sheep, pigs and deer, said Erfurt city hall spokeswoman Inga Hettstedt, and the meat was not sold to restaurants. However the mass circulation newspaper Bild reported Thursday that ducks, quails and even guinea pigs were also involved. The zoo, which is owned by the city of Erfurt, has over 1,400 animals belonging to around 190 species.

The employees, who carried on the unsavory trade over a number of years, did not have a permit from a veterinarian to kill the animals, and the meat was not inspected according to German slaughterhouse regulations. Hettstedt pointed out that it was not illegal for zoo animals to be killed and sold. However a vet's permit is always needed.

Furious animal rights groups are calling for animal inventories in all German zoos to be made public. The organizations People for Animal Rights (Menschen für Tierrechte) and Animal Public said Thursday that abuses were also happening at other zoos, claiming for example that monkeys at one zoo had been sold to a laboratory for experiments.