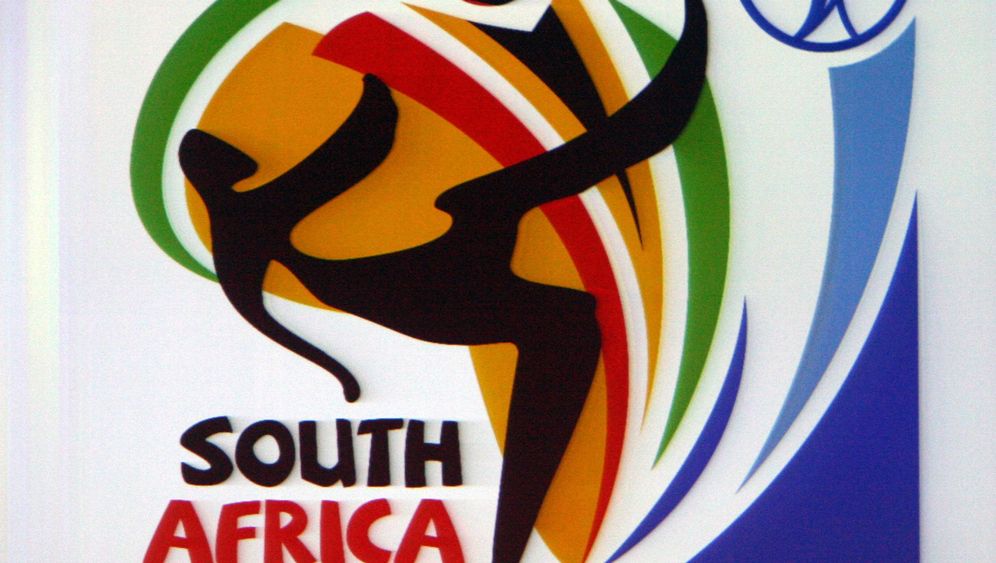 Three female dancers were already hanging from cables attached to the ceiling, moving to the birdlike twittering noises coming from the band, when Joseph "Sepp" Blatter arrived last Wednesday. A cloud of artificial fog rose behind him as Blatter, a Swiss native, strode, kinglike, through the darkness of the packed Building 2 at the Gallagher Convention Center outside Johannesburg, illuminated by a camera crew's single spotlight.

That day thousands of people had lined the streets in the Sandton business district to cheer on the players of the South African national team as they rode past in an open bus. A dream was coming true, Blatter, 74, said at the opening ceremony of the 60th FIFA Congress.

Most of all, it was the FIFA president's day to be celebrated for having brought the World Cup to South Africa. In his remarks, Blatter quoted President Jacob Zuma, who had likened the level of enthusiasm over the event to the excitement among South Africans over the release of Nelson Mandela.

In recent years, the FIFA president's appearances in Africa have been met with roaring applause. Zuma called the decision to hold the World Cup in South Africa a "vote of confidence from the international community." In Europe, however, critics accuse Blatter of being an opportunist when it comes to the politics of sports. They say he is merely using his self-declared weakness for Africa -- he has recently been calling it a "love story" -- to curry favor among poorer member countries and thereby to secure votes from their football associations.

Blatter's adversaries claim that the awarding of the World Cup to South Africa, which was originally planned for 2006 and, in 2004, with the help of an artful trick in the rules, finally approved for 2010, was merely the fulfilment of a campaign promise. The votes of the African associations brought Blatter into office in 1998. By supporting the idea of a temporary rotation among the continents hosting the World Cup, he managed to place the spectacle in Africa this year.

Of course, a World Cup is more than just a sporting event. Global and development policy doubtless also plays a part. But more recently football has been portrayed as a sort of global bailout package. In its brochures, FIFA extols the "unifying, educational, cultural and humanitarian values" of football. Blatter, for his part, behaves like a statesman on a mission of peace.

He promotes social campaigns among heads of state. One is called "Education for all," and its goal is to give 72 million children worldwide a chance to go to school. Although FIFA doesn't collect money to support the cause, it does collect signatures. Another project is designed to bring Africa the infrastructure, equipment and training courses it needs to develop professional football leagues and clubs. FIFA uses a third campaign, "Football for hope," as the framework to build educational centers and medical care facilities. FIFA supposedly invested $77 million (€64 million) in African football between 2006 and 2009.

Some say that Blatter has set his sights on the Nobel Peace Prize. In fact, there are those who accuse him of such ambitions because of his unctuous way of speaking. Whether it is in a township near Cape Town or at the World Cup opening concert in Soweto, Blatter takes advantage of every public opportunity to emphasize the beneficial effect of FIFA. He is constantly talking about the organization's supposed mission "to shape a better future."

But is it really Africa he cares about, or just his own image?

FIFA devotes 0.7 percent of its revenues to social causes, and it has had its own development office since 2005. There are initiatives for Africa with cryptic names like "Healthy thanks to the 11" and "The 11+," which promote accident prevention and helping people protect themselves against diseases by suggesting that they "avoid alcohol" and "drink clean water."

The park-like grounds at the FIFA headquarters building in Zurich, Switzerland, contain plants from all six continents where football is played. The concrete cornerstone on display in the room where the executive committee meets contains an oversized football, which in turn contains bags of earth from the countries of all FIFA associations. There is a chapel in the next room.

It was in this spiritually charged environment that FIFA President Blatter wrote his messages for the World Cup before his departure. Football, according to Blatter, is a school of life. The fight against poverty, illiteracy and health problems is "the legacy of football, because, after all, everyone plays football," said Blatter, who has on occasion referred to himself as "the African." He added: "The international family of football has managed to sit up and say: We are now recognized in the world."

About 10 years ago, when Germany won the final decision for the 2006 World Cup by a vote of 12 to 11, Thabo Mbeki, the then president of the defeated candidate South Africa, complained that Africa was being marginalized, which he characterized as "the globalization of apartheid." Blatter saw an opportunity in Mbeki's outrage, realizing that the most effective policy move would be to compensate the losing candidate by giving it a chance to compete for the next tournament.

"Without the rotation system, we wouldn't have the World Cup in South Africa. The public didn't have any confidence in Africa, either," Blatter now says at almost every public appearance. On Wednesday, Mbeki was awarded FIFA's Order of Merit.

Blatter sees himself as part of the tradition of his predecessor João Havelange, under whom he once served as head of development programs, then as technical director and general secretary. Havelange, a Brazilian, advocated the universality of football, which translated into strengthening less well-off clubs and enabling them to participate in the major events. "Football isn't just Europe or South America," says Blatter. It is certainly true that he derives his power from the support of the so-called small football countries, and yet this is not an argument against FIFA's social projects and orientation.

'A Message of Faith, Love and Hope'

Blatter reveals an amusing self-importance when he occasionally remarks that his institution is bigger than the United Nations or the Catholic Church. Nevertheless, this doesn't harm the people in the 2010 World Cup host country, South Africa. "We want to touch the world with our message, a message of faith, love and hope," Blatter once gushed.

FIFA officially lists 40 honors, prizes and awards for its president, including Kyrgyzstan's Order of Danaker and the honorary citizenship of his hometown, Visp. And now Blatter was awarded the Order of the Companions of Oliver Tambo, South Africa's most important honor for foreign nationals. Blatter says: "The purpose of a World Cup is not to go where it is easiest to host it."

But now there can be no serious mishaps. The World Cup has to be a success, at least for Blatter, who has announced that he will run for reelection in 2011, which would be his fourth term. But if tourists attending this year's World Cup become the victims of violent crime, no one will be interested in centers for hope and signature campaigns anymore. In fact, some might be asking how the poorest neighborhoods have actually benefited from the World Cup.

There will probably be an opposing candidate in 2011. But Blatter could benefit from the fact that the executive committee will award the 2018 and 2022 World Cups in December. Nine candidates are in the running, and for Blatter the selection represents an opportunity to win fresh backing. FIFA has called upon all candidates to champion "positive changes in our world," and Blatter wrote, in a pastoral letter of sorts, that FIFA has "the obligation to reach out to the world and, by pinning its hopes on football, to touch people and bring them together."

No one is as good at this as the chief of global football himself. Before the World Cup final draw in Cape Town, Blatter convened FIFA's executive committee on Robben Island, the site of the former prison where Nelson Mandela was held. Blatter sat next to former prisoner Tokyo Sexwale, who is now a FIFA official and South Africa's Minister of Human Settlements. After the meeting, the group assembled on a dusty football ground so that the president could perform part of the organization's traditional liturgy by kicking a ball in a place with such historical significance. When he saw that Blatter was no longer wearing a tie, Sexwale removed his tie and said: "We would like to ask the president to give us a goal."

The president kicked the ball with his right foot from a standing position. And then he said quietly: "Now that was some shot, wasn't it?" 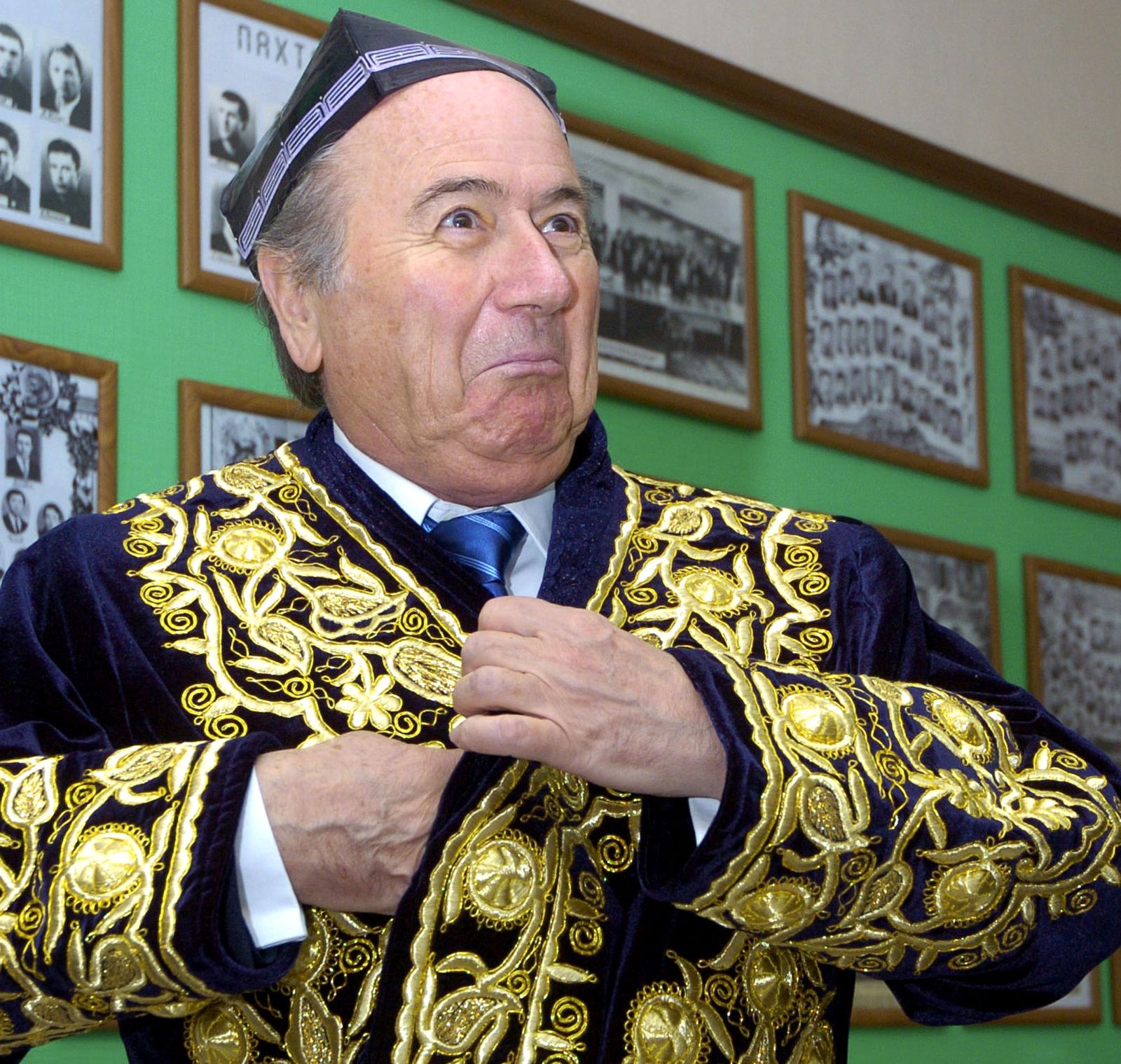 Blatter trying on Uzbek folk costume during his visit to the Uzbek capital of Tashkent in March 2007. Blatter sees himself as part of the tradition of his predecessor João Havelange, under whom he once served as head of development programs, then as technical director and general secretary. Havelange, a Brazilian, advocated the universality of football, which translated into strengthening less well-off clubs and enabling them to participate in the major events.