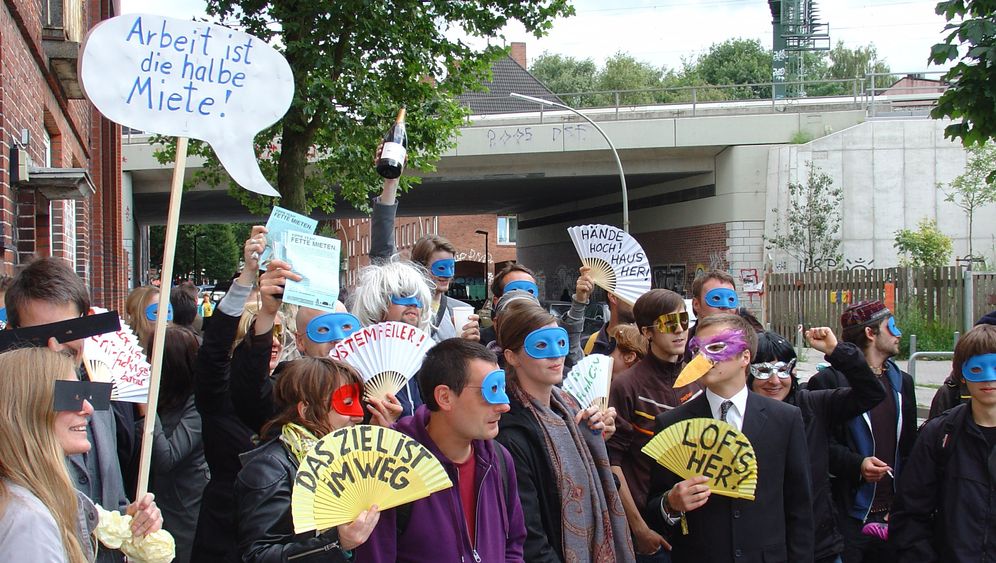 Photo Gallery: Party for Your Right to Rent

The protesters have arranged to meet in Fritz Bauch, a pub popular with the left-wing scene in the Schanzenviertel, a trendy and slightly bohemian district of Hamburg. "This time it's a very small apartment, but a very expensive one," announces organizer Jonas, 31, addressing the group.

Then he explains the procedure: A small advance guard is to conduct reconnaissance at the nearby apartment viewing. If the coast is clear, the others will follow them. Once the music is playing, everyone should put on their masks and wigs. And then the "Fette Mieten Party," or "Fat Rent Party," can get started.

The days when apartment-hunters in Germany would wait patiently in line to view flats appear to be over. Today, real estate agents have to be prepared for unwanted visitors amid a wave of protests against gentrification in Germany's major cities. Activists say that rising rents are making it increasingly difficult for people to find affordable housing.

It is the fourth "Fat Rent Party" to be held in Hamburg this year. Its organizers aim to draw attention to skyrocketing rents in the city through flashmob-style protests at open apartment viewings. Meanwhile, in Berlin, activists from a group that calls itself the Hedonist International have been turning up to hold protests at flat viewings in the rapidly gentrifying eastern neighborhood of Friedrichshain. A video on the group's website shows protesters dancing around naked at a recent viewing, holding up signs that read "exorbitant rents."

The new form of protest was apparently invented by a group called Jeudi Noir ("Black Thursday") in Paris around five years ago. In a bid to draw attention to what they consider intolerable rents in the French capital, the group stormed flats and real estate agencies, where they drank champagne, threw confetti and played music.

Anti-gentrification activists in Germany also see plenty to protest about. A new study by the real estate research institute Empirica revealed that rents are rising rapidly in Germany's major cities. In Berlin, rents have risen by 14 percent in the last year, while Cologne has seen increases of 12 percent. Frankfurt and Hamburg have both seen year-on-year increases of 7 percent. The reason for the rising rents is the increasing number of people moving to big cities and the fact that many people are living alone, combined with a decrease in the number of new flats being built, Empirica's Reiner Braun told the Frankfurter Allgemeine Sonntagszeitung newspaper.

For this latest "Fat Rent Party," the Hamburg activists have chosen to visit a property described as a "well renovated, comfortable one-bedroom apartment," located in the Schanzenviertel neighborhood just a stone's throw away from the center of the area's nightlife.

Around 30 protestors dance a conga line through the apartment to the Madness song "Our House," which is blasting out of a boombox. They drink sparkling wine from plastic cups and hold up cardboard signs with anti-gentrification slogans.

With its wooden floors, bathtub and fitted kitchen, the flat is clearly a desirable property. The only drawback is the price: The monthly rent, plus utilities, for the 47-square-meter (500-square-foot) apartment comes to €723 ($926), a huge amount even by Hamburg's standards.

The rent is actually too expensive for Johanna, a 21-year-old law student, but she has come to see the flat anyway. Currently living with her parents, she has been looking for a new place for months, and she knows that she won't find anything better. "If you find a cheaper flat in the newspaper, there will be a line of people all down the block at the viewing," she shouts, as the party rages around her.

"We mainly want publicity," says Jonas, who has been helping to organize the "Fat Rent Parties" together with other activists from the Hamburg-based movement Right to the City. "We need a housing policy that is geared to the interests of tenants -- not to profit."

The people who have come to the flat viewing are almost all white, German and middle class -- the only demographic that can afford such high rents. The protest action appears to go down well with the apartment hunters, who were given flyers at the door. The rent that is being asked seems too much even for the neatly dressed students and the well-heeled parents looking for a place for their kids who have come to see the apartment.

"I'm joining the protesters!" announces one woman from the town of Itzehoe, when she finds out that the deposit and the realtor's commission together will come to over €4,000. Her daughter and a female friend, who are studying in Hamburg and are looking for a place together, stand beside her, looking embarrassed.

The friend's father is also there -- and has his own opinions about the real estate market. "When she lived in the city of Osnabrück, my daughter only paid €350 for a 40-square-meter apartment, including utilities!" he says. But provincial cities like Itzehoe and Osnabrück are not Hamburg, and the Schanzenviertel neighborhood is in demand. "Numerous pubs and restaurants are just a few minutes' walk away," write the realtors in the Internet ad for the flat.

Indeed, Hamburg is not a cheap place to live. According to the local tenants association, Hamburg residents spend between 36 and 45 percent of their monthly income on rent, significantly higher than the German average of just over 25 percent.

In recent years, the city has become the front line in a bitter conflict over gentrification, with artists squatting buildings in protest against investment plans and members of the far-left scene attacking private property.

The Police Turn Up

After a quarter of an hour, the party is over. The protesters stomp down the stairwell, hooting and jeering. All they have left behind are a few paper streamers and some confetti on the freshly varnished floorboards. "We don't cause any damage," says Jonas, the group's spokesman. "The worst thing that can happen is that we spill a bit of wine." He says the activists deliberately set up the protests to be as inclusive as possible. "We try to start a dialogue with people."

Outside on the street, the activists pose for a group photo for the journalists present. The bewildered realtor has to defend himself against a barrage of uncomfortable questions. No, he says, the real estate agency is not responsible for setting the level of the rent -- that's up to the landlord to decide. Does he have any sympathy for the protestors? "Sure, sure, I can understand it," he says softly. Then he crosses the street to make a phone call in peace.

Five minutes later, a police van comes round the corner of the street. A dozen police officers burst out of the vehicle and run toward the protesters, who are strolling away in the direction of the pub where they met earlier. Some of them start to run, prompting the police to intervene and block the protestors' way. When one activist tries to make his escape, he is handcuffed. "Apparently there was some jostling during the flat viewing," says the officer in charge of the unit when asked why the man is being held.

Two lawyers who have accompanied the activists speak up. "That is not a crime. Sometimes it gets a bit cramped at flat viewings -- that's all." A heated discussion ensues. The man is released after five minutes, once the police have taken down his personal details. "Learn about civil rights next time!" shout the activists as the police head off.

For one observer at least, it's no coincidence that the police took such a heavy-handed approach to dealing with the incident. According to Marc Meyer, a lawyer from a local organization that advises tenants on their rights, the Hamburg branch of Germany's domestic intelligence agency, the Office for the Protection of the Constitution, which monitors the far-left scene, has set up a working group dedicated to the anti-gentrification movement. "They are happy to get activists' personal details," Meyer said.

The police won't have to wait long for their next run-in with the protestors. At the "Fat Rent Party" in the Schanzenviertel, the activists handed out flyers announcing an event that another group is planning at an empty office building which has a public viewing on Oct. 23. The 18-story Astra Tower in Hamburg's St. Pauli neighborhood, named for a popular local brand of beer, was completed in 2007 but has been largely empty ever since -- as is another 1.2 million square meters (13 million square feet) of office space in the city.

The flyer promises that the activists behind the new event will "investigate alternative opportunities for using the space" at the viewing. In other words, they want to squat the building.